Since Steve Jobs announced that he was taking a medical leave of absence from Apple (see “Steve Jobs to Take Medical Leave of Absence,” 17 January 2011), while still remaining CEO, he has been seen at dinner with President Obama and other tech industry luminaries, and there’s been a fuss with shareholder groups demanding a public succession plan (unsurprisingly for a company run by adults, Apple says it has already implemented succession planning).

That reminded me of a conversation I had with former Apple evangelist Tim Holmes at Macworld 2011. Ever the one to make brash predictions, Tim said, “Steve will never come back to Apple.” I hadn’t thought about it that far into the future, but as Tim explained himself, I had to agree with his reasoning.

This isn’t a completely new idea. Farhad Manjoo wrote over at Slate about why Jobs won’t return to Apple. But while I think Farhad’s conclusion is correct, I disagree with his reasoning, which is that Jobs won’t return because “What more is there left for Jobs to do?” Jobs isn’t driven by money or concrete goals; he wants to change the world, and people who want to change the world don’t stop wanting that just because they’ve achieved certain benchmarks. The man is not going to sit around for the rest of his life because Apple created the iPod, iPhone, iPad, and iTunes Store under his leadership. I’m sure he’s proud of those achievements, but if I’ve learned anything
from watching Steve Jobs all these years, it’s that he always has more that he’d like to accomplish.

No, the reason Jobs won’t, and more to my point, shouldn’t officially return to Apple is that it’s in Apple’s interest to downplay his eventual departure as much as possible, given the widespread perception that he is essential to the company’s performance.

Apple’s stock price was hurt by the announcement of his medical leave of absence, but within a few weeks had recovered. Viewed over a longer period of time, that dip is barely even visible. The recovery was bolstered by another record-breaking financial report (see “Apple Reports Stellar Q1 2011 Financial Results,” 18 January 2011). The timing of these announcements was carefully orchestrated, I’m sure, and it shows that Apple handled the situation well, reassuring a skittish market that the company would continue to operate without missing a beat. 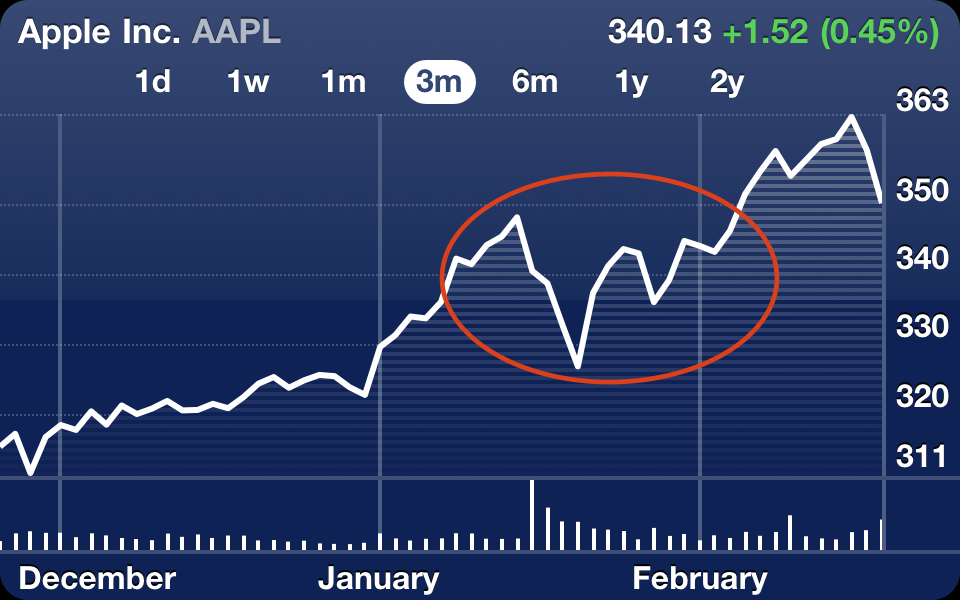 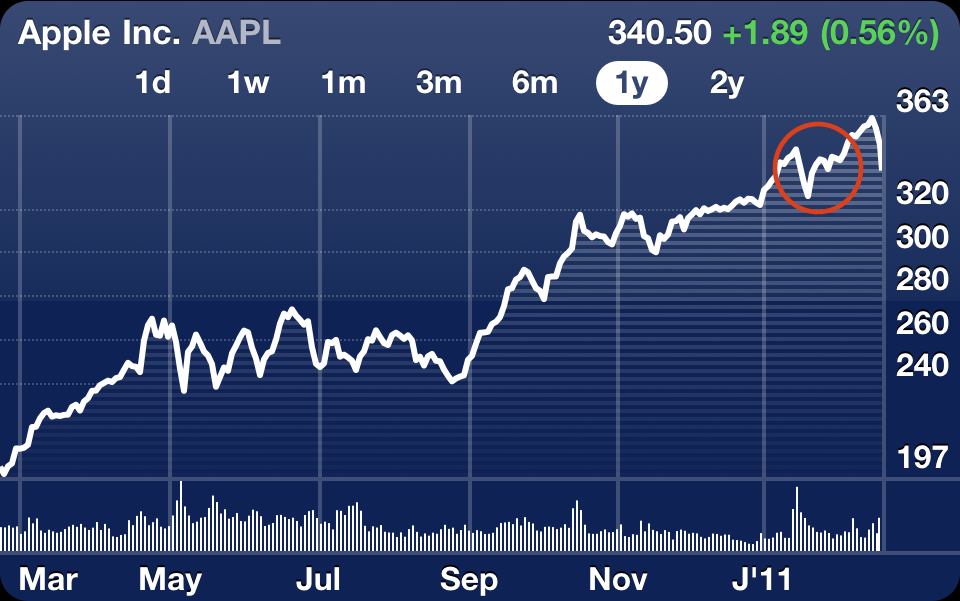 So why should Apple risk going through such an announcement again when this one was handled so well? Barring a major corporate crisis that would require his talent for public communication on an ongoing basis, Apple has little to gain from Jobs officially returning from his leave
of absence. In one possible future, Jobs would participate less and less in Apple’s public events, to the point where Apple could uneventfully announce a CEO transition, with Jobs remaining chairman of the board, and some time later announce that he would be stepping down as chairman while remaining a special consultant.

It’s important to realize that none of this has to affect Jobs’s actual engagement with product development and overall direction. That Jobs “will never come back to Apple,” as Tim suggested, doesn’t mean that he won’t appear on the Apple campus or even, health permitting, work 10-hour days. All it means is that the open-ended medical leave of absence can remain in place as long as it needs to, with Jobs acting as CEO in press releases and behind the scenes as necessary.

The goal is for Wall Street to see that Jobs is not the linchpin to Apple’s success. That, of course, assumes that Apple will continue to succeed without him involved in day-to-day operations, but his previous absences have shown that the experienced Apple executive team can run the company effectively.

In the end, it’s impossible to say for sure that Steve Jobs won’t officially return to Apple, even if I don’t see that happening. But I can say that Apple’s solid handling of the medical leave of absence indicates that he should continue to minimize his official duties so Apple can gracefully transition to a new CEO and Chairman when that becomes necessary.

Comments About Why Steve Jobs Shouldn’t Return to Apple