Until last week, I assumed I’d be purchasing an iPad 2 with built-in 3G data connectivity. With the arrival of iOS 4.3 and the Personal Hotspot feature on the iPhone, I’m wondering if a cheaper Wi-Fi-only iPad 2 is the way to go. If you’re also facing this choice before purchasing an iPad 2, follow along as I break down the options.

For the last year, my constant companion has been an original iPad Wi-Fi + 3G model. Although I usually have Wi-Fi access at home and my office, I often ride the bus to work, and use that time to catch up on email, Twitter, and Facebook updates. So, I’m accustomed to having Internet access whenever I need it on my iPad.

But I also always have my iPhone 4, which now sports the capability to run the Personal Hotspot feature. The Verizon iPhone 4 has had this capability since its release; it’s new to AT&T customers who own the iPhone 4. (iPhone 3GS users can install the iOS 4.3 update, and the Personal Hotspot option appears, but it’s limited to USB and Bluetooth, just as with the previous tethering option.)

With a few taps, the iPhone becomes a walking Wi-Fi connection. If my iPhone is always at hand, perhaps I can save some money by not buying the 3G iPad and expend just a little more effort to get connected.

Because AT&T and Verizon Wireless have different data plans for both the iPhone and iPad 2, I’ll look at two separate scenarios. But my first and most important question is: How easy will it be to make this work? If I get annoyed every time I need to activate the Internet connection, it’s worth it to me to pay more money for the 3G iPad and extra data plan.

For Readers outside the United States — TidBITS readers who don’t have service plans in America may find much of this article mystifying. In the United States, AT&T and Verizon Wireless are the only two carriers offering the iPhone, and both charge a substantial monthly fee to turn on Personal Hotspot (formerly tethering).

Some other carriers in the world charge nothing whatsoever for either tethering (in iOS 3 or 4) or Personal Hotspot (in iOS 4.3 for GSM phones). In most cases, any additional data usage is counted against your existing data service plan, with any overage fees or throttling limits applied as if you’d used the data from the phone itself.

Some carriers do require a minimum tier of data service, like Canadian carrier Rogers, which requires at least a 1 GB per month data plan, or may offer tethering and Personal Hotspot as part of a basket of inexpensive upgrades to basic data service. Don’t laugh at us; we’re suffering enough already.

Will It Be a Hassle? — We’ve known the Personal Hotspot feature was coming, but I initially discounted it as an option based on reports from people who use a MiFi router for on-and-off use when roaming. The MiFi takes a few minutes to power up and acquire a mobile broadband network connection. The iPhone, of course, removes most of that pain by being always connected to a cellular network.

The setup for Personal Hotspot involves an online change (AT&T only) or a call to your carrier (AT&T or Verizon) to activate it on your service plan. Then you open Settings > General > Network, and tap Personal Hotspot. Apple conveniently sets a strong password for the Wi-Fi access. Tap the switch to On. 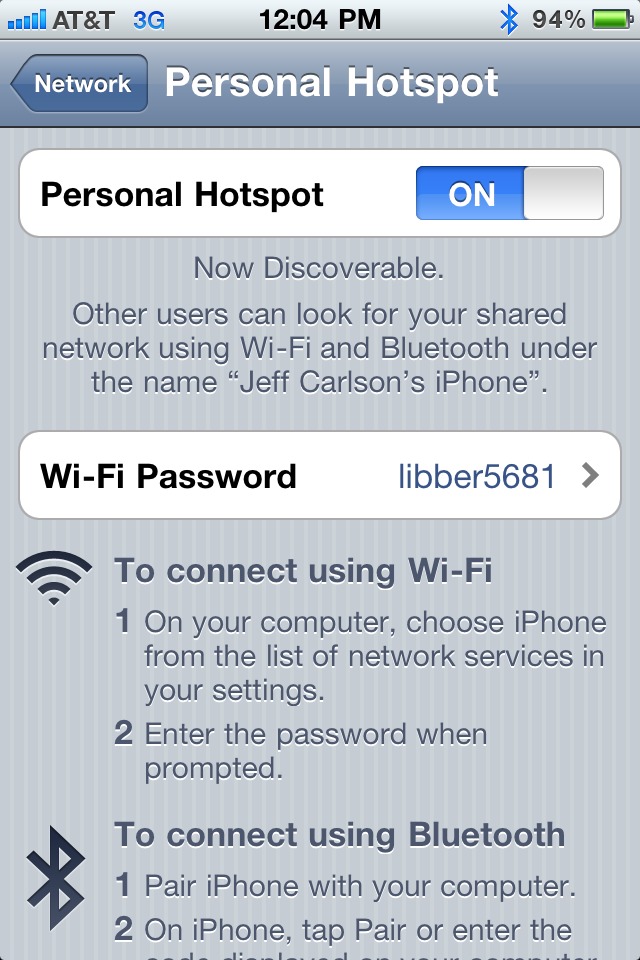 After this, the Personal Hotspot switch appears in the main level of Settings to tap on or off. I’d love to see an app that let me activate the hotspot without even delving into Settings, but in testing with my original iPad (with the 3G service turned off), three taps is acceptable.

The hotspot password is generated randomly, but it’s persistent once you’ve set it up. You only need to enter a password once on the iPad 2 or other devices that store a Wi-Fi password; after that, the device automatically reconnects to the iPhone if the Personal Hotspot is active.

If I’m on the bus or sitting in a park, I pull out my iPhone, tap the hotspot switch to On, and then put it in a pocket in favor of the iPad 2. (The iPhone displays a blue bar to indicate it’s in hotspot mode and reports how many active connections there are.) Of course, the hotspot can also accept up to three simultaneous connections, letting you connect a Mac or two as well, when no Wi-Fi is available. (You can connect one device via Bluetooth and one via USB as well, for a total of five.) 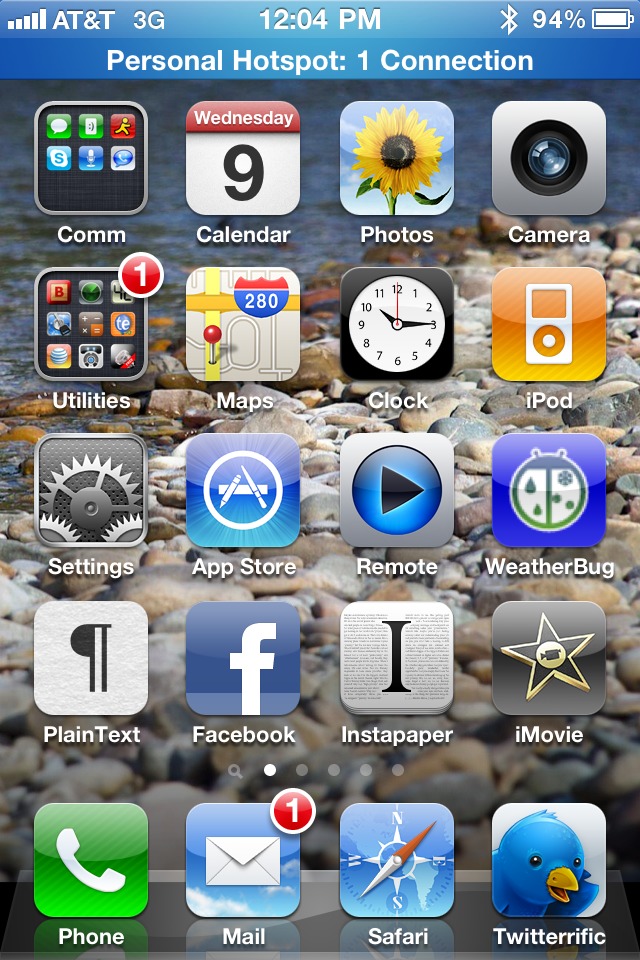 The Personal Hotspot feature definitely consumes more battery power on your iPhone than when the phone is just connected to a 3G network. The 3G iPad 2 would last hours longer on a single charge over 3G than the iPhone relaying 3G data over Wi-Fi. At the same time, the iPhone’s battery recharges faster than the iPad’s, making it more efficient to top off the iPhone’s power if an electrical outlet is convenient.

Comparing Costs on the AT&T Network — On the AT&T network, standard data packages include the $15-per-month DataPlus plan for 200 MB of data each billing period (overages cost $15 for 200 MB), or the $25-per-month DataPro plan, which includes 2 GB of data and charges $10 for each additional 1 GB. However, to use the Personal Hotspot feature, you must switch to the DataPro plan. (You can switch for part of a month via the AT&T myWireless app or your account at the AT&T Web site, or retroactive to the start of the month through the Web site.)

AT&T then charges another $20 per month for the Personal Hotspot, bringing the total to $45 per month. This adds 2 GB to your data pool for a total of 4 GB each month. It’s not allotted to use by apps on the phone versus tethering or wirelessly connected devices: it’s a shared pool. Personal Hotspot can also be turned on and off as an account feature each month, allowing you to pay for it just when you need it.

The cheapest scenario is the DataPlus plan at $15, and 250 MB iPad 2 plan at $14.99. That will run you $30 (minus a penny) each month, compared with $45 for the DataPro plus Personal Hotspot offering. That points toward separate plans, since you’d make up the difference in iPad costs in less than a year.

However, if you regularly use more than 200 MB on an iPhone and 250 MB on an iPad 2, or if you want to take advantage of the Personal Hotspot feature for other devices, the numbers make sense for saving the $130 hardware differential between the Wi-Fi-only and 3G iPads. The iPhone $45-per-month cost is cheaper than two $25 plans, and has the advantage of the pooled 4 GB in bandwidth instead of two 2 GB plans. (It’s also worth pointing out that if you still have a grandfathered unlimited data plan, switching to a tethered plan kicks you out of the unlimited club.)

You can’t turn the iPad 2 data plans on and off during a month, either: the service is not pro rata. That makes the Personal Hotspot feature even more cost effective if you need it only while traveling during a month. However, you can cancel an iPad 2 data plan’s automatic renewal at any time for the following month.

One slight difference between the iPhone and iPad 2 plans: the 3G iPad 2 plan from AT&T includes free access to all paid hotspots in the AT&T Wi-Fi network, which includes a number of hotels and airports. The Personal Hotspot feature can only share a 3G connection; it can’t relay access from a Wi-Fi network over Wi-Fi. Thus you might have to force your iPhone to use 3G data when it could use Wi-Fi for free in order to provide access to your iPad while traveling or in a hotel.

Comparing Costs on the Verizon Wireless Network — Verizon Wireless’s costs are somewhat different, starting with the data plan. Verizon offers only a $30-per-month unmetered service plan for the iPhone 4. It plans to change this to tiered, metered service in mid-2011, but new prices and tiers haven’t yet been announced.

Verizon charges an additional $20 per month for the Personal Hotspot feature and doesn’t allow partial-month pro rata payments. It also includes 2 GB of service, allotted just for the hotspot and tethering usage, but has a $20-per-GB fee beyond those 2 GB.

In this scenario, the cheapest separate plans you could have without a mobile hotspot for an iPhone 4 and an iPad 2 are $50: $30 for the iPhone data plan and $20 for the one for the iPad 2. You’d have unmetered usage on the iPhone and 1 GB of usage on your iPad 2.

If you instead opted for the Personal Hotspot option, you’d wind up with the same price but different bandwidth limits: $50 per month would get you 2 GB of usage among all tethered and Wi-Fi–connected devices. That’s probably the better deal.

Of course, as with AT&T, if you plan to connect other devices to your iPhone, then the mobile hotspot option provides the most flexibility of data use without adding additional costs.

Making a Choice — So, in the end, the Personal Hotspot approach will be cheaper for AT&T users who use lots of data, and more expensive for those who can stay within the lowest limits. And it’s exactly the reverse for Verizon Wireless users, for whom the Personal Hotspot approach is slightly better for lower bandwidth users, but more expensive once you go beyond 2 GB of data.

As for ease of use, the fact that the iPad remembers the iPhone’s network password, and that the iPhone switches into Personal Hotspot mode easily, leads me to think that adding the extra step of enabling the hotspot wouldn’t be onerous.

Of course, the other question is if you need the Personal Hotspot feature for your Mac as well. If that’s true, as it is only occasionally for me, that may outweigh higher costs for low-bandwidth AT&T users and high-bandwidth Verizon users. For instance, for me, having the option of using Personal Hotspot would cost me $50 more than having the two separate data plans over an entire year, making it worthwhile if I needed it in two separate months (since it can be turned on and off by month).

When I started writing this article, I thought I’d save money by buying the Wi-Fi iPad 2. However, for my specific data usage, it turns out that the numbers favor sticking with my plan of buying a 3G iPad 2 and keeping the lowest-tier iPhone data plan, even considering the initial $130 outlay. I’m surprised, to be honest, but now I can concentrate on the more important decision: Which color of Smart Case will I pair with the iPad 2?

Comments About Can an iPhone Personal Hotspot Plan Take Over for a 3G iPad?