Anyone who wants to do more with PDFs on an iPad than just view them in iBooks has almost certainly heard of Good.iWare’s GoodReader app for the iPad, and many have already probably ponied up the $4.99 to buy it. For those who haven’t, the latest release, version 3.5.0, offers yet another reason to do so. GoodReader 3.5.1 for the iPhone, which is a separate $4.99 app, is also now available.

A brief recap: GoodReader was one of the first iOS apps to offer users a way to read a variety of file types on iOS devices. In addition to PDF and text files, GoodReader can display common Microsoft Office files, iWork files, HTML and Safari Web Archive files, and various image and media files. Over time it has gained more power and flexibility, adding the capability to download files wirelessly from a variety of sources: MobileMe iDisk, Google Docs, WebDAV servers, Dropbox, FTP servers, SugarSync, and box.net. It has also extended its early lead in PDF handling (it was one of the first apps to support PDF links) with the capability of annotating PDF files and syncing those annotated files back to their server sources. And not only
individual files: users can sync all of the files in a remote folder with the app instead of having to choose them one at a time. It’s easy for a GoodReader user to see which files or folders are synced: they each have a special sync badge attached to them.

Now, with GoodReader’s latest revision, SFTP servers have been added to the mix of GoodReader download sources – but that’s not the big news. The big news is this: GoodReader now provides a “Download Only” sync option that organizations can use for document distribution.

Think of it as a “syncing diode” if you will: files from the remote server sync to GoodReader, but any changes made to the synced files within GoodReader stay within GoodReader. The files flow one-way, like electrical current through a diode.

How might this be of use? Consider a college class full of iPad-carrying students who sync their syllabuses and course readings with a central server. Those students can mark up their individual files as much as they like, but none of those annotations travels back to the server. Meanwhile, as new course reading materials are added to the server, the students can sync them to their iPads for annotation and study.

Similarly, a company’s far-flung sales force can sync with the mother-ship’s server to get the latest sales sheets, price lists, and related documents on their iPads, and thereby always have the latest information at their fingertips. They can then mark up these materials as they like without those changes traveling back upstream and ending up on their colleagues’ iPads.

The new sync capabilities are accessed on a sync-source-by-sync-source basis. The already robust set of syncing controls offered by GoodReader have a new one added: Type of Sync. In this category, there is only one option: “Download only” Sync. Turn that on, and the syncing policies that control what happens when files are deleted either locally or on a server vanish — because they are not needed. 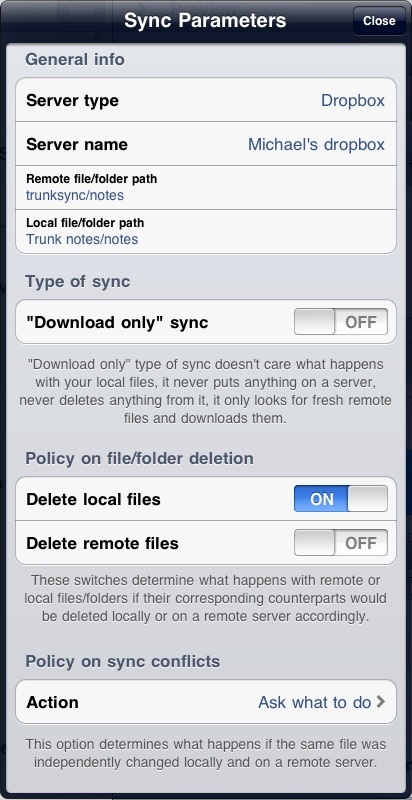 With this addition to GoodReader’s already commodious bag of tricks, the app has become an even more powerful tool for workers, students, and readers in general. With the new download-only sync capability, any group can create a private publishing system using almost any kind of server technology or service they happen to have at hand.

GoodReader’s syncing diode feature is one of those cases where less truly is more.