In this series so far, I’ve explained features of Gmail that are standard (see “Zen and the Art of Gmail, Part 1: Why I Switched”) and “Zen and the Art of Gmail, Part 2: Labels & Filters”). But as much as I’ve liked using Gmail, the fact that it has met my needs in large part has been due to the optional enhancements provided by Google engineers via Gmail Labs. I presume these are the sort of features that Gmail’s product managers consider unnecessary for most users, but they’re made available to anyone who wants them, and some are essential to my workflow.

To access Gmail Labs, click the gear icon at the top of Gmail’s Web interface page and click Labs in the menu that appears. (For Google Apps accounts, there’s a Settings link at the top instead of the gear icon.) Then scroll down through the long list of items, clicking the Enable radio button for any that look interesting. I recommend being somewhat conservative in how many you enable at a time, since a flaky Gmail Labs feature can in theory cause Gmail to fail to load. I won’t attempt a laundry list, but here are the ones that I find make an actual difference to my Gmail use, in rough order of importance. 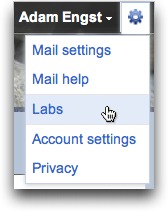 Quote Selected Text — I consider this Gmail Labs feature essential for cutting some replies down to size. Much of the time there’s no need to quote an entire original message in a reply, and with this feature enabled, you can select just the text you want quoted before replying. This feature is commonplace in traditional email programs, and I would miss it horribly if it weren’t available in Gmail.

Undo Send — One of the things I liked about Eudora was that I could queue messages for later delivery, which would happen either on my next mail check, or when I manually released them. It was entirely common for me to remember something I wanted to add to a queued message, so I appreciated that approach, even though it created a little more work.

Gmail, like many other email programs, lacks the concept of queuing outgoing messages, instead offering only a Drafts mailbox for in-progress messages that you haven’t yet sent. That’s not good enough; I need to be able to add to a message that I previously thought was done, and the Undo Send feature of Gmail Labs gives me that.

Once enabled, it displays an Undo link on the screen next to where Gmail reports “Email Sent.” Click it within 30 seconds (configurable in the main Settings screen), and Gmail moves the message (which hasn’t really been sent yet) back into Drafts and lets you edit it again. I use it regularly.

Quick Links — I really like the Quick Links widget, which enables me to create a single-click link to any bookmarkable URL in Gmail, most notably unread messages in my Inbox. So, anything you can encapsulate in a search, such as the following, can be turned into a link for instant access.

One tip: Complex searches in Gmail are easier to build if you first click Show Search Options (in tiny text to the right of the search field). Then build your search, make sure it finds the right messages, and copy the search phrase from the “Search Results for:” line to the left of Gmail’s main interface buttons. Then paste that into the normal search field and make your Quick Link. If you make a Quick Link with Search Options showing, it will show every time you use the Quick Link, which is a waste of screen real estate.

Alas, Quick Links can’t have keyboard shortcuts, which would be helpful.

Navbar Drag and Drop — Gmail puts quite a number of items in the left-side navigation bar, but they aren’t always in the order you want. With this Gmail Labs feature, you can rearrange them, at least somewhat. I like to put Quick Links near the top, but it often moves down on its own for unknown reasons.

Multiple Inboxes — Like Priority Inbox, the Multiple Inboxes widget in Gmail Labs tweaks Gmail’s default list of messages, offering you up to five additional boxes that you can use to display the results of any search. (Remember, everything is about search.) Of course, the most likely searches are for labels, but you can display anything you can find. You can set how many messages appear in the boxes, though they all use the same number.

The various boxes can be displayed below, above, or to the right side of the main Inbox. I could see above being useful for particularly important messages, and I prefer below, but because the right-side display shrinks the Subject area of the message list, it would be helpful only with a very wide window.

You configure the searches for Multiple Inboxes in its own settings screen, accessible from a link added to the others at the top of the main Settings screen. 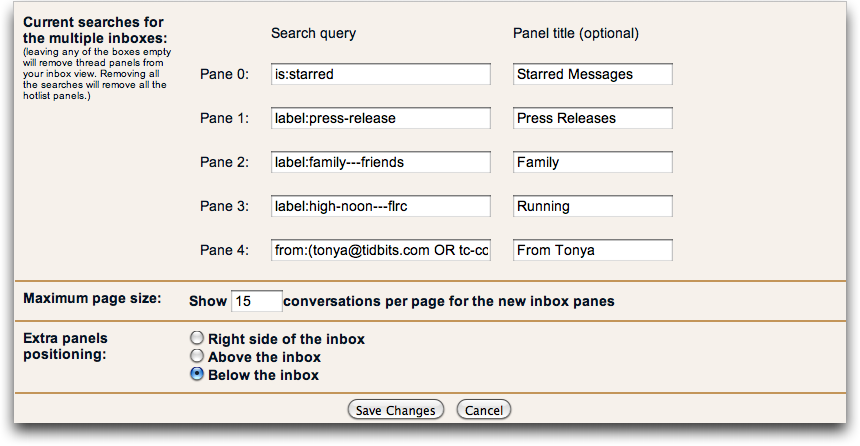 Currently, you can get previews for Flickr, Picasa, Google Docs, Google Maps, Yelp listings, and even Google Voice messages (so you can play your Google Voice voicemail right from the email notification). YouTube previews used to be available via a Google Labs feature, but are now built into Gmail by default.

Smart Addressing — A pair of Gmail Labs features make Gmail the best email program I’ve seen for helping the user avoid addressing mistakes. Once you add one or more recipients to a message, “Don’t forget Bob” enables Gmail to suggest other people, based on groups you have sent email to in the past. And “Got the wrong Bob?” alerts you when you address a message too quickly and accidentally send to Bob (your boss) rather than Bob (your friend). It kicks in only once you’ve added more than two recipients (since it needs the context of groups you’ve sent email to in the past to guess that you might have the wrong Bob). For more information, see “Gmail Further Foolproofs Group Emailing ” (15 October 2009).

Google Calendar Gadget — Since I have full access to my calendar in BusyCal on my Mac at all times, and reminders from it and on my iPhone, Google Calendar isn’t that important to me. But since we use Google Calendar as the intermediary for sharing certain calendars via BusyCal, I’ve added the Google Calendar widget to Gmail as well, so I see a little box showing the next couple of events in Gmail’s left-side navigation bar.

Advanced IMAP Controls — Although I read my mail in Gmail’s Web interface, I also back it up by retrieving it in Apple Mail via IMAP. That way, should something awful happen to Google or my mail in particular, I have a local copy that’s backed up along with all the rest of my data. This Gmail Labs feature makes working with IMAP a bit easier. My understanding is that Gmail’s IMAP is, shall we say, kind of weird, since it has to map labels to IMAP folders (meaning that a message can appear in multiple IMAP mailboxes). For more information, see Joe Kissell’s essential article on the topic, “Achieving Email Bliss with
IMAP, Gmail, and Apple Mail” (2 May 2009).

Canned Responses — This feature attempts to mimic Eudora’s stationery feature, at least as far as the boilerplate text goes (Eudora’s stationery could include message header information as well). Although I like the idea of having canned responses, in the real world, I don’t use it much, and I use it only manually since I don’t trust software to send mail for me automatically. But that’s just me. Of course, you could also use something like TextExpander or Keyboard Maestro for this functionality, though such utilities don’t appear within Gmail’s interface.

Add Any Gadget by URL — I don’t use this Gmail Labs feature, but I like the idea of it, and I tried using it briefly to put a Twitter gadget in Gmail’s left-side navigation bar. There are oodles of Google gadgets, which are roughly similar to Dashboard widgets. The only problem is that a lot of them are bad, and not all display well in the limited width of Gmail’s navigation bar.

While Gmail Labs widgets can go a long way toward improving the overall Gmail experience, there’s one more thing you can — and should — do to make Gmail into a first-class citizen on your Mac. For that, you’ll need to use the Mailplane application to free Gmail from the confines of your Web browser, and I’ll look at Mailplane in the next installment in this series (see “Zen and the Art of Gmail, Part 4: Mailplane”).

All About Gmail Networking Zen and the Art of Gmail

Comments About Zen and the Art of Gmail, Part 3: Gmail Labs