The App in Operation — The app is designed to be as easy to use as a cable TV, or maybe even easier. Once the app is configured, just launch it, tap a channel, and watch. The channel selection palette appears along the left side of the display (which always appears in landscape orientation). You can easily reveal and hide the channel palette with a tap anywhere on the screen. If you want to play the channel-swap game as you would with a TV remote control’s Back or Jump button, tap the app’s Channel History button to reveal a list of the channels you’ve most recently watched and then tap a channel on the list to switch to that channel. If you close the app and later
reopen it, it starts streaming the channel you were watching when you closed the app, just like a TV. 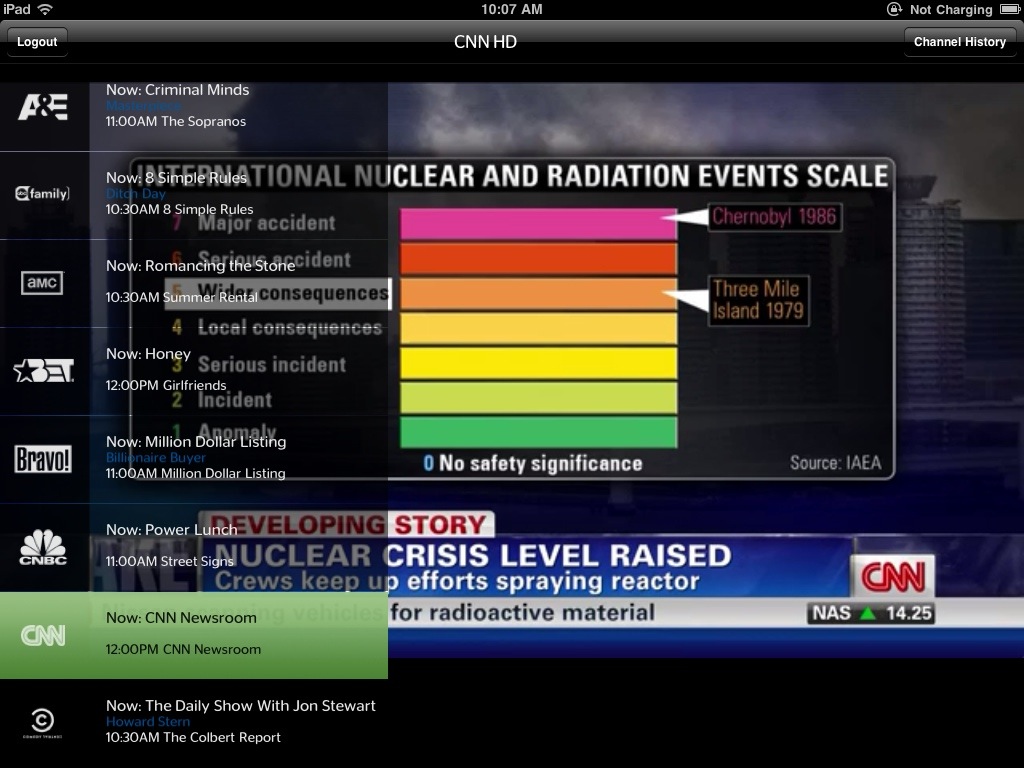 That’s it in terms of app features. It doesn’t do anything other than play live TV and let you change channels.

To create these essential credentials, the app takes you to the Time Warner site, where you have to choose a user name (an email address that you currently use) and a password that is at least eight characters long and that has at least one numeral in it, configure a couple of security questions to which you know the answers (such as “What is your mother’s father’s first name?”), enter a user code from your most recent cable bill and the last balance you paid, and verify the user name by responding to an email that Time Warner sends you.

In my case, the signup process was flakier than a well-made croissant, and nowhere near as tasty. To start, the Time Warner site repeatedly rejected a password I entered that met all of the stated criteria. After I had filled out all the required information, the verification email I received contained a link I had to click to confirm the signup: that link brought me to an error page. On that error page was an instruction to “Click below” for assistance, but there was no link to click! However, the verification error page was itself apparently in error because I was able to get the app to work with the user name and password that I had supplied.

My problems might be attributed to the fact that I tried to set things up on the app’s very first day of release. Apparently, the app was so popular that it brought Time Warner’s site to its knees on the first day, and also forced the company to scale back the number of channels offered temporarily from the promised thirty to about half that number. However, as I write this, I see twenty-eight channels listed.

Limitations — The app, now that I have configured it, works very well. But it does have its limits.

Aside from the lack of any viewing controls other than channel switching (for example, no pause capability, no AirPlay capability, no on-screen volume controls, no parental controls), the channel selection is constrained: the channels offered are basic cable channels only. You can’t view any of the premium services to which you subscribe, nor can you view any of the local broadcast stations that your cable subscription includes. These limits, I understand, are due in part to the licensing agreements that Time Warner has with its partners.

Furthermore, the app works only over Wi-Fi, and only within your own home. Were I to go on the road, I wouldn’t be able to use the app unless I were in a location with both Time Warner cable and Internet service, and I happened to have the login credentials for that location. The chances of that, of course, are rather small.

Musings — This app is certainly not The End of TV as We Know It. The limitations it imposes are major, and the functionality it offers is low. All it really provides is a portable TV screen you can carry around your home so that you can watch a fraction of the TV channels to which you have subscribed. Time Warner has worked hard to come up with the bare minimum of a cable TV app.

On the one hand, I feel rather disappointed and insulted: I pay quite a bit of money to Time Warner for my cable and Internet service, and the limits that the app imposes makes it feel less like a bonus from my service subscription and more like a begrudged handful of pennies tossed my way from a wealthy but miserly uncle.

On the other hand, I rather like having a very portable TV with a high-quality screen at hand any time. Like any TV, I often have it on while I’m busy doing something else (such as, for example, writing this article), and the channels it does offer usually have something worth watching at any given time.

As I implied above, there’s a lot more that I would appreciate in a live cable TV app:

Even though TWCable TV is the barest of a bare-bones cable-TV app, it may be enough. For now. I’d like more, and maybe, someday, I’ll get it. But I’m not going to hold my breath as I wait.

Comments About Time Warner Sprinkles Cable TV on the iPad