As the bugs targeted by minor releases to Mac OS X 10.6 Snow Leopard become increasingly specific, it’s easy to become complacent about the possibility of an update introducing a new problem. That, however, is precisely what has happened with last week’s release of Mac OS X 10.6.7 (21 March 2011), which, among much else, fixes security vulnerabilities related to font handling.

In a nutshell, font rendering with 10.6.7 is breaking when certain types of fonts are used. In particular, people are reporting errors when printing using certain fonts from Word and Pages, among other programs. Others are experiencing problems when creating PDF documents using OpenType PostScript fonts. (These PDF files work correctly in Preview, but may cause problems in Adobe Reader and Adobe Acrobat on the Mac and in Windows.) We’ve even seen reports of font problems when developing in Flash Professional. That said, the bug will affect
all Mac applications that rely on Mac OS X’s mechanism for rendering fonts; programs like InDesign that have their own rendering engines are immune.

According to my sources, the problem is that each font used in a PDF has a description of how the glyphs are encoded, and a change in 10.6.7 resulted in PDFs ending up with an incorrect encoding definition. Since Mac OS X uses PDF as the print spool format, that accounts for both PDF files and print jobs showing the problem. The Flash Professional authoring tool relies on the platform’s font rendering, which explains why it’s having trouble too.

As for why affected PDFs work fine in Preview but not in other programs, that’s a side effect of the fact that Preview doesn’t pay attention to the entire PDF specification (for instance, it also ignores color spaces, thus avoiding problems with badly structured PDFs that manifest themselves in Adobe Reader and Acrobat Professional). Be careful here, since PDFs with OpenType PostScript fonts created in 10.6.7 will have this problem forever, which could result in problems well into the future.

The problem seems to be restricted to OpenType PostScript fonts. As Sharon Zardetto explains in “Take Control of Fonts in Snow Leopard,” OpenType isn’t so much a font technology as it is a font format, created by Adobe and Microsoft. The OpenType standard supports using either a PostScript or TrueType font description, with OpenType PostScript fonts generally using the .otf extension and OpenType TrueType fonts generally using either .ttf or .ttc (occasionally they use .otf for backward compatibility reasons). An easier way to determine if a particular font is an OpenType PostScript font is to view the font info in Font Book (choose Preview > Show Font
Info) and look in the Kind field. (Myriad Pro, which I used in the screenshot, is commonly cited in reports of people who have been having trouble.) 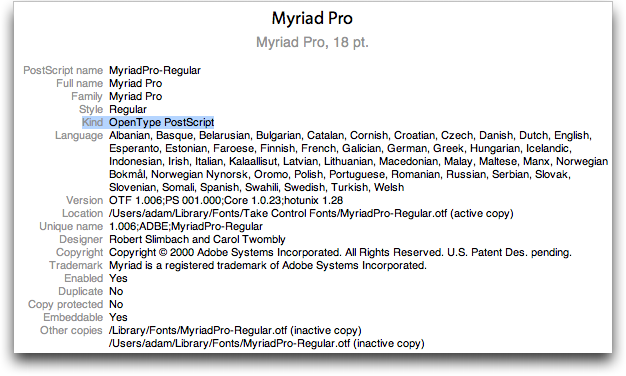 The easiest workaround is of course to use a different font that’s not in the OpenType PostScript format, but that may not be possible given institutional font requirements (or just the desire to use a particular font). Short of that, the only solution appears to be to reinstall Mac OS X 10.6 Snow Leopard from DVD, and then apply the Mac OS X 10.6.6 Update Combo to return to the most recent release of Snow Leopard before this problem appeared.

And of course, if you rely on OpenType PostScript fonts for your work and you haven’t yet updated to 10.6.7, I recommend holding off until Apple resolves the situation. It should be an easy fix, but there’s no telling how soon we’ll see it.