Among the many changes in the upcoming Mac OS X Lion, one of the most welcome is the capability for applications to auto-save documents you’re working on. This isn’t a new feature — programs such as iMovie have done it for years — but it’s a first to offer system-level support for automatic saving of files. We expect that thousands of hours of lost productivity will be saved as a result of not losing edits due to an application crash.

However, the feature does present a problem: What will happen to those of us who compulsively press Command-S to save documents every few minutes? I’ll get awfully tired of hearing a system beep dozens or even hundreds of times per day. Fortunately, I’m not the only one afflicted by this inconvenience. Rob Griffiths, formerly of Macworld and now working at Many Tricks, has announced the release of Lioness, a utility that redirects that reflexive gesture into more productive and entertaining activities. (You have to love their tagline: “These days, saving manually is a roarity.”)

Lioness intercepts any Command-S key combination and acts upon it. A free demo version gives you the option of hearing four different sounds: a roaring lioness, a baby’s giggle, a man’s “Do’h!” exclamation, or a gentle forest breeze. You can also choose to have Lioness pick a sound at random. Also, a Growl notification appears with a counter indicating how many times you’ve hit Command-S. 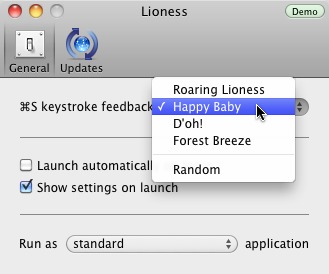 Currently, Lioness is available in a free demo mode. Following the release of Mac OS X Lion in a few months, Many Tricks plans to add Paranoid mode (informally known, according to Griffiths, as the “Kissell Run”) as an in-app purchase (pricing is yet to be determined). With Paranoid mode active, hitting Command-S automatically does a number of things: It puts a copy of the active document in your Dropbox folder in the Finder; pops up a Growl notification showing that the file was successfully copied and how much
potential data loss you’ve avoided; and returns control to the frontmost application, so you can get back to work.

A demo version of Lioness is available now from Many Tricks as a free download. The paid version is expected to become available shortly after Mac OS X Lion has shipped, and will also be in the Mac App Store. After using the software for several hours, I can say that Lioness is the app that will sink its teeth into my data and not let go.