In the epic battle among browsers, the latest flanking maneuver comes from the Mozilla Foundation, in the form of Firefox 4 for Mac OS X, Windows, and Linux. As with recent releases of Safari, Google Chrome, and others, most of the notable changes are foundational, where they support Firefox’s role as a platform for Web sites and applications. The changes are almost entirely welcome, and improve on the experience for existing Firefox users, though I doubt they’re significant enough to attract users of other browsers to switch.

First, a quick note about system requirements. Firefox 4 now requires Mac OS X 10.5 Leopard or 10.6 Snow Leopard running on an Intel-based Mac. That’s a major change from Firefox 3.6, which worked on 10.4 Tiger and later on both PowerPC- and Intel-based Macs; so if you have a PowerPC-based Mac, you’ll want to stick with Firefox 3.6.16, which remains available. Or, since Firefox 4 is open source, you can try a Tiger-compatible branched version called TenFourFox; I haven’t tried it.

Refining Firefox’s Interface — Remember when a beta of Safari 4 moved the browser’s tabs above the address bar? It was an unpopular move, so much so that Apple moved the tabs back underneath the address bar in the release version. That hasn’t stopped Chrome, and now Firefox 4, from moving the tabs up to the top (albeit slightly differently from Chrome). While it’s different from Firefox 3 and from Safari 5, the tabs on top haven’t made any significant usability difference in my experience, and if you don’t like the feature, you can turn it off by choosing View > Toolbars > Tabs on Top. 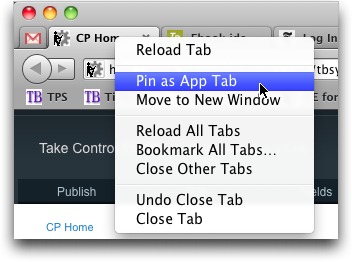 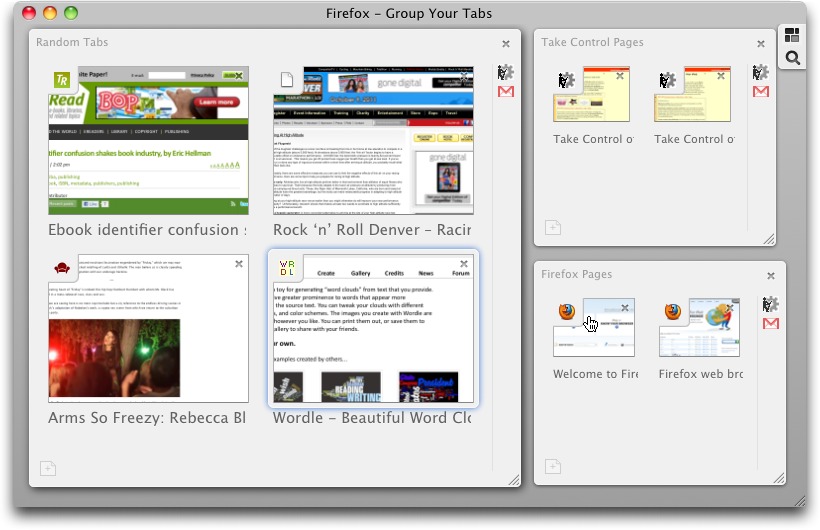 Of these changes, app tabs are welcome (though not as much with Web apps that create multiple tabs), as is the capability to switch to a tab by typing in the location bar. Less immediately successful is Panorama view, which I can’t quite envision using, since I leave tabs open as a reminder that I want to read them, or as a reminder to do something else. While seeing visual representations of tabs isn’t unwelcome, the idea of organizing them is a bit like rearranging one’s Post-It notes.

Other interface changes include the merging of the Stop and Reload buttons at the right edge of the address bar (reasonably enough; there’s no reason why you’d ever want to use both simultaneously) and a new design for the Add-ons Manager. 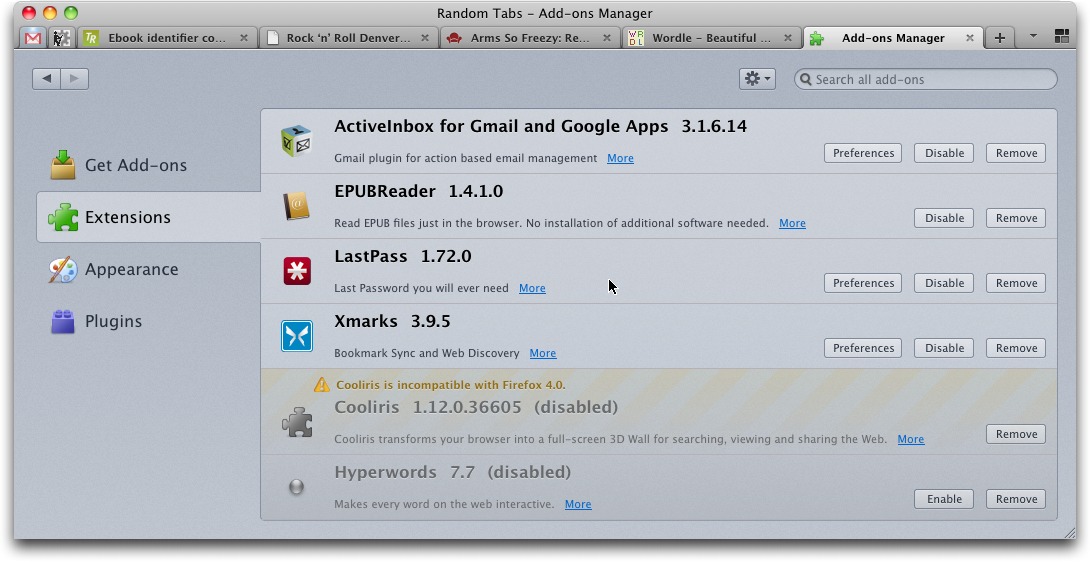 Firefox 4 does take one significant step back from Firefox 3.6. In that older version, when you typed gmail into the location bar, Firefox would instantly load the Gmail Web site, even if you hadn’t visited it before or created a bookmark. The same was true of apple (which would load www.apple.com), white house (which loaded www.whitehouse.gov), and so on. For keyboard-centric people like me, this guessing
(via Google’s “Browse By Name” feature) was a huge win, and if Firefox guessed wrong, which it did very infrequently, you could use the search bar instead. In Firefox 4, the location bar can only perform a Google search by default, forcing you to load another page and click another link to get to the right site. That’s still better than Safari, which will error out if you type something in the location bar that isn’t a domain name, and equivalent to Chrome, which also searches Google.

Luckily, you can bring this behavior back to Firefox 4, either by using the Browse By Name add-on, or by following these simple steps:

(As an aside, you have to appreciate the names given to JavaScript engines: Firefox’s SpiderMonkey, TraceMonkey, and JägerMonkey; Safari’s SquirrelFish, SquirrelFish Extreme and Nitro; Chrome’s V8, Opera’s Futhark and Carakan; and Internet Explorer 9’s Chakra.)

Other changes that will improve performance in Firefox 4 on the Mac include:

Unfortunately, there’s a known issue with Firefox 4.0 on all platforms that can cause scrolling in the main Gmail window to be slower than usual; expect that bug to be fixed in 4.0.1.

Now, don’t get me wrong. I’m all for faster Web browsers, and I truly do appreciate all the work the browser development teams do to increase performance. But realistically, Web pages and Web apps are simply slower than desktop applications because there’s almost always some communication over the inescapable bottleneck of the Internet connection.

As a result, my experience is that I can use a new, faster Web browser and simply incorporate its improvements into my assumptions of how quickly I should be able to perform certain tasks on Web sites without actually feeling that it’s running any faster. So Firefox 4 may benchmark faster than Firefox 3.6, and it may or may not out-benchmark Chrome and Safari, but I can’t say that I’ve really noticed any improvement in my real-world usage. It’s just not like switching your Mac from a hard disk to an SSD, where some previously sluggish activities become lightning fast.

Better Standards Support — Here’s another area where the tremendous efforts of browser developers aren’t generally appreciated by end users: support for new Internet standards. Users just want to look at Web pages, and Web developers want to make pages that everyone can view and interact with correctly, regardless of what old browser may still be in use (may you forever fail to render a complex page in Hades, Internet Explorer 6!). So there’s a constant tension between relying on new standards and supporting old browsers. Nonetheless, support for new standards in browsers is the first step in widespread adoption, so it’s great to see it happening.

Although it’s unclear if the test reflects real-world capabilities, Firefox 4 now scores significantly higher on the HTML5 test site. For comparison, here’s how the major Mac-compatible browsers stack up, with 400 being the maximum:

As long as we’re on the topic of tests that may or may not reflect real-world usage, Firefox 4’s new Gecko 2 engine also does a better job on the Acid3 test, scoring 97 out of 100, up from Firefox 3.6’s 94 points, but still behind the perfect 100 out of 100 enjoyed by all the WebKit-based browsers, including Safari, Chrome, Opera, and OmniWeb.

Other standards-based improvements include:

Other Improvements — There are three additional improvements in Firefox 4 that are worth noting, and one problem that I hope will be resolved soon.

First, Firefox Sync is now available by default (it’s an add-on for Firefox 3.6), and enables you to sync your Firefox history, bookmarks, tabs, and passwords across all instances of Firefox, most notably the mobile version of Firefox for Android (and Maemo running on the Nokia N900). There’s also Firefox Home for iOS, a free app that provides access to your Firefox history, bookmarks, and open tabs via Firefox Sync. In either case, you need to set up a Sync account before anything will happen (such as syncing your home browsing history to your work computer where the IT
department could look at it, which might not be desirable).

I haven’t tested Firefox Sync because I find the combination of LastPass and Xmarks to be more useful, synchronizing as they do among all the browsers I use (see “LastPass Acquires Xmarks,” 13 December 2010).

Second, if there’s a crash in the Flash, QuickTime, or Silverlight plug-ins, Firefox 4 now isolates that from the browser as a whole, requiring only that you reload the page to recover from the crashed plug-in.

Third, Firefox changes the way CSS :visited selectors work to block malicious Web sites from being able to read your browsing history. This security hole has existed in most, if not all, browsers for many years, and put simply, enables an attacker to walk through your history and see where you’ve been.

Finally, although many Firefox add-ons either work with Firefox 4 in general or have been updated to work with it, there’s one notable exception, the PDF Plugin for Firefox on Mac OS X. As a result, Firefox 4 cannot display PDFs inline, as Firefox 3.6 could with the plug-in (but see this article’s comments for a link to a pre-release version of the PDF Plugin that works with Firefox 4 in 32-bit mode). There’s also Schubert|it’s PDF Browser Plugin, but it hasn’t worked well for me. I don’t always want to view PDFs in the browser, but I like the option.

In the end, Firefox has long been my default browser, though I also run Safari and Chrome at all times and use them for particular Web sites, either because they work better (as Google Docs does in Chrome) or just to separate different Web site logins. Although I was initially distressed by Firefox 4, due to its loss of Google’s Browse By Name searching, once I figured out how to restore that functionality, Firefox 4 took over fine from Firefox 3.6 and has been working well.

But here’s the thing. While I was figuring out how to restore Browse By Name functionality to Firefox 4, I also figured out how to add it to Google Chrome, and it was the main reason I preferred Firefox over Chrome (and the lack of Browse By Name in the address bar is the main reason I dislike using Safari). Since Xmarks ensures that I have exactly the same bookmarks in all my browsers, I’m now planning to switch back and forth between Firefox 4 and Chrome to see which I prefer now that I can make them work in very similar ways. More when I’ve formed an opinion.

Should you switch to Firefox 4? If you’re using Firefox 3.6 on an Intel-based Mac, yes, you should, so you can take advantage of its performance and standards improvements (though I recommend re-enabling the Browse By Name feature immediately so Firefox 4 works the way you expect). But if you’re happy with Safari or Chrome, I don’t see the changes in Firefox 4 making such a difference that you’ll feel compelled to switch. That said, there’s nothing wrong with downloading a copy and checking it out; if nothing else, it can be helpful to have a different browser around in case you have trouble with a particular site. And who knows, perhaps you’ll find that Firefox 4 fits your needs perfectly.

Comments About Firefox 4 Improves, But Not Radically