One of the perks of being a speaker at Macworld Expo — a few notches down from being included among such great company — is the “speaker bag.” Presenters are not paid to speak at the event, so one way IDG World Expo offers compensation is by putting together a collection of products, demos, software licenses, and special deals from vendors at the show, which every speaker receives in a large duffel bag. Not only does it feel like a way to repay speakers for what ends up being a lot of hard work, the speaker bag is a savvy move by the organizers to get products in front of a group of influential writers, editors, and industry insiders.

This year, nestled among a couple of iPad cases, was a slightly heavy, circular lump of rubberized plastic with an angled top and a vertical wedge cut from the middle. I initially dismissed it as a lame business card holder or something, but it has turned out to be the speaker bag item I use the most.

That lump, which looks like a mutant hockey puck, is called the Stump Stand, and it’s designed to hold an iPad in one of three positions. Lay the iPad down against the angled top to type on the onscreen keyboard at a 45-degree angle. Or, set one of the iPad’s edges into the vertical notch to prop it upright (such as for watching movies). The cutout has two steps, so the iPad in the upright position can also be leaned back at more of an angle by shifting the iPad slightly. A cutout at the front of the Stump Stand makes the iPad’s Home button accessible when the iPad is mounted upright in its portrait orientation. 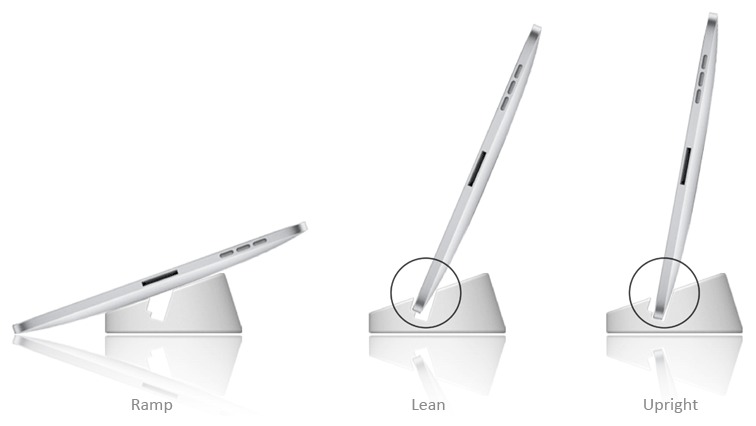 When I started using my original iPad last year, I had difficulty finding a good resting place for it while working. The iPad Dock supports only the iPad’s portrait orientation, and removing the device from the dock connector meant pulling the two apart with both hands. I ended up propping the iPad on a wooden book holder my sister made for me back in junior high school.

After I outfitted the iPad with Apple’s black iPad Case, the iPad Dock was knocked permanently out of commission, since there’s not enough clearance in the dock to hold a covered iPad. The Stump Stand, by contrast, accommodates the original iPad while still enclosed in its Apple case (with the flap open). Better yet, I can prop it in portrait or landscape orientation, and easily lift it from the Stump when I need to pick it up. The weighted base (8.5 oz, 241 g) keeps the Stump from shifting around on the desk.

The Stump Stand works with the iPad 2, even with a Smart Cover folded flat against the iPad’s back, although the fully upright position doesn’t quite fit with a leather Smart Cover; the polyurethane version fits snugly with a small amount of force. The slightly angled “lean” position, however, works fine with either cover. (And, of course, because the Smart Cover’s magnetic latch pulls off easily, it’s no big deal to set the cover aside.) In fact, the Stump isn’t limited to the iPad. It will prop all sorts of devices, from the iPhone and iPod touch to the Kindle, that fit within the wedge.

I’ve spent the last six weeks working on several iPad projects: my new “Take Control of Media on the iPad, Second Edition” and “Meet the iPad 2,” the first ebook about the iPad 2 at the iBookstore (both now available); and my upcoming print and ebook title, “The iPad 2 Pocket Guide,” which will be available within the next couple of weeks. During that time, I’ve needed to lift, rest, sync, and type on as many as three iPads at any given time. Although I own just the one Stump Stand, it’s been great to
test something on an iPad quickly, set it down in the stand while I write on my Mac, and lift it again when I need to do more testing.

My Stump Stand is black (with a little Macworld 2011 logo on the back, showing off the company’s capability to custom-brand it), but it’s also available in red, pink, green, blue, or light gray (the latter two colors appear to be sold out as I write this). The Stump costs $22; the company is currently running a special on two black units for $40.

Comments About Stump Your iPad