It may not sport a major release number, but the update to Gmail client Mailplane 2.3.1 is actually quite significant. It provides a few minor bug fixes and has only two new features, the first of which (compatibility with Mac OS X Lion) isn’t terribly interesting for most of us. But the second significantly enhances Gmail usage by building in support for the free Boomerang for Gmail plug-in and service, which has previously been available only for Firefox and Google Chrome users. (To enable the plug-in, in Accounts pane of Mailplane’s preferences, click the Plug-Ins button and select the “Load Boomerang plugin (by Baydin)” checkbox.)

Boomerang for Gmail brings back to Gmail a Eudora feature that, if not unique, was at least unusual: scheduling of message delivery. (Apple Mail lacks scheduling, but a free AppleScript-based solution makes it possible to queue messages for later delivery.) Sometimes you want to queue a message up now, but not have it sent for an hour or a day or a week. For instance, if I’m sending someone a huge file via Dropbox, it takes some time for Dropbox to upload the file and make it available, but I don’t want to have to check back on Dropbox in an hour to see if it’s done, and I don’t want to tell my recipient to wait an hour from the time I sent the message to see if the
file is there. Instead, I tell Boomerang to send the message in an hour, when I’m certain the file will be available. I also sometimes queue up birthday wishes or other time-specific messages so I can write them in advance and have them delivered at an appropriate time. You can even edit queued messages, though the process requires canceling the action, editing the message, and rescheduling. 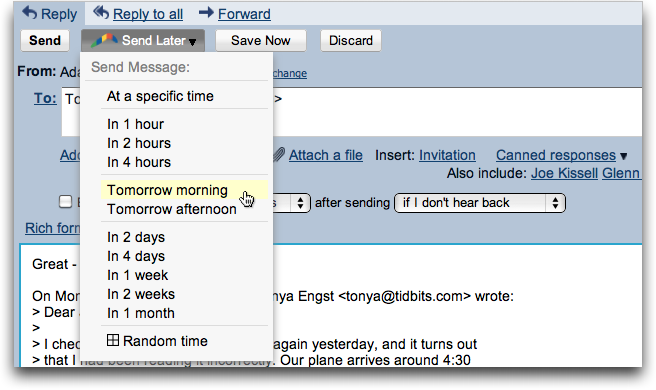 But Boomerang goes beyond just bringing back a feature missed in Eudora. Most notably, it solves the problem of remembering to follow up with people who haven’t responded to an important message. You can set Boomerang to remind you in a user-specified amount of time if you haven’t heard back from the person, or even if you have. This is huge, because now you don’t have to make a to-do item to follow up with someone — Boomerang does that for you.

Finally, sometimes you may receive an important message that you need to deal with, but not right away. You could star the message, or apply a label that identifies it, but those require you to notice the message in the future when the time comes to deal with it. Instead, you can just tell Boomerang to take the message out of your Inbox right away and bring it back at a specified time and date. It can optionally make the returned message unread, starred, appear at the top of your Inbox, and labeled as “Boomerang.” 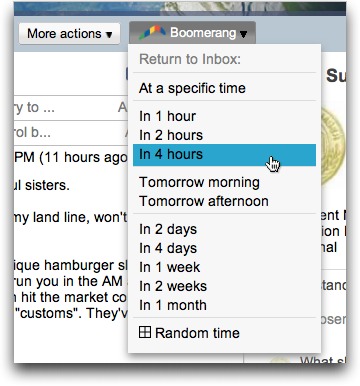 If the text of a message contains a date or time, Boomerang even automatically suggests an appropriate time to return it. Boomerang’s creators, Baydin, note that if a message suggests a meeting at 4 PM on Thursday, Boomerang will automatically offer to return the message 2 hours before so you have time to prepare. I haven’t found this useful, personally, but perhaps I don’t do enough scheduling in email.

As you schedule messages for later delivery and set Boomerang to remind you about messages, those actions accumulate in Boomerang’s dashboard, accessible from a Boomerang link at the top of the Gmail window. You can reschedule messages or send/return them right away, if you like. 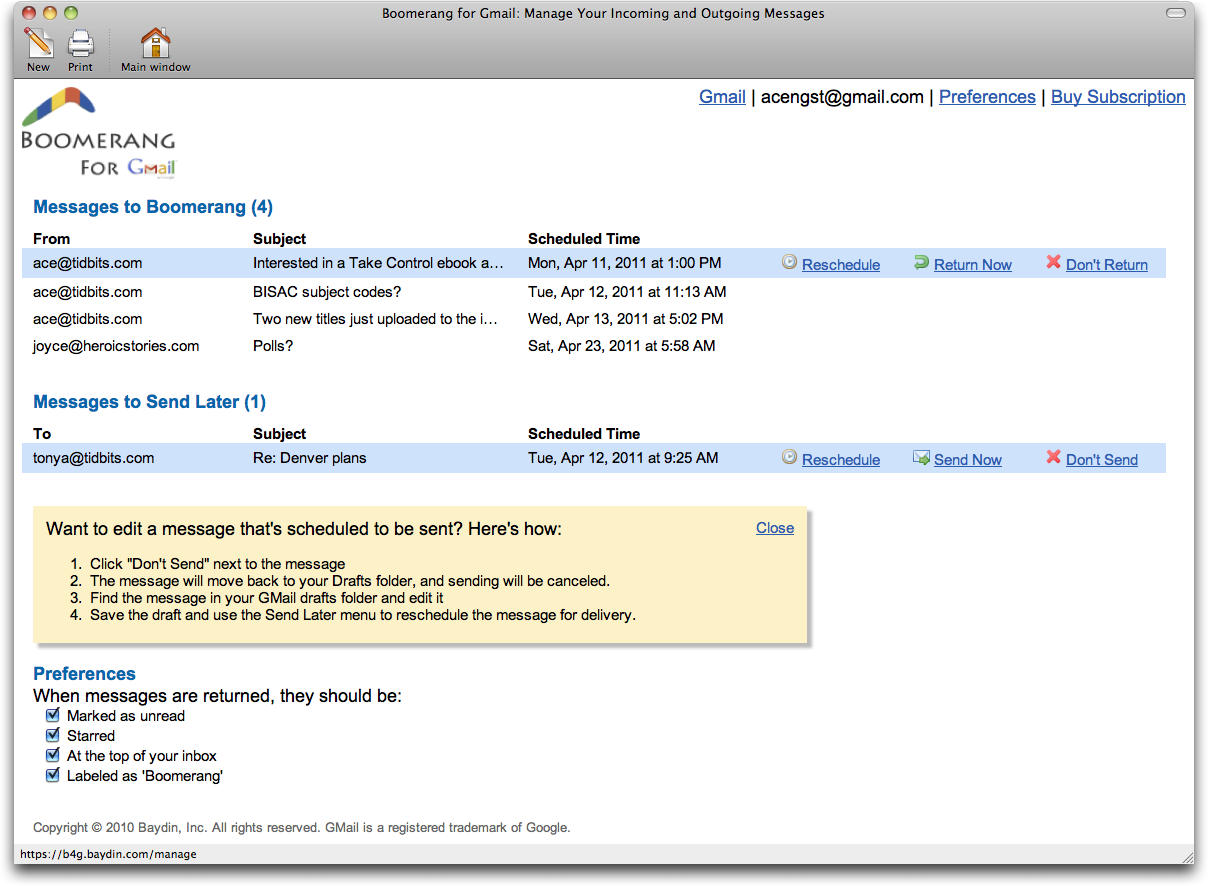 The only awkward thing about Boomerang is that it works its magic by maintaining several Boomerang-specific labels and sending you additional messages, which have the effect of bringing the associated Gmail conversations back to the top your Inbox. It feels a little clumsy, but the approach is effective.

Taken together, these scheduling features make Gmail even more useful in ways that email clients simply haven’t done in the past. It’s a shame too, since capabilities like message scheduling, followup reminders, and delaying of messages aren’t magic, and could easily work their way into other programs. (In fact, if you use Windows at work, there’s an Outlook version of Boomerang too.) But since no Mac clients have done this sort of thing, Boomerang, and Mailplane’s new support for it, is just another reason why I like Gmail so much (see our series “All About Gmail” for details).

Boomerang is free to use, but the company makes it possible to buy a subscription if you find it useful; currently, there are no different features for subscribers. Mailplane 2.3.1 costs $24.95 new; the update from previous 2.x versions is free.

All About Gmail Networking

Comments About Mailplane 2.3.1 Adds Support for Boomerang for Gmail