Apple’s free Remote app isn’t included with the iPad, but it should have been. Remote works over a Wi-Fi network, letting you use your iPad as a remote control for playing audio files and videos in iTunes on a computer or on an Apple TV. In this excerpt from my new ebook “Take Control of Media on Your iPad, Second Edition,” learn all about using your iPad as a smart (and large) media remote. Although none of the steps are difficult, it can take some effort to wrap your head around the best way of controlling your media with the iPad.

Know When the Remote App Makes Sense — Apple has introduced a number of ways to control and play media among devices, so take a moment to review your options and match your needs to what Apple’s Remote app can do:

On either Apple TV, the Remote App lets you type passwords or other text using the iPad’s keyboard, a notable improvement over using the physical remote. Remote also lets you navigate and configure various Apple TV settings, providing a trackpad-style interface to the Apple TV. 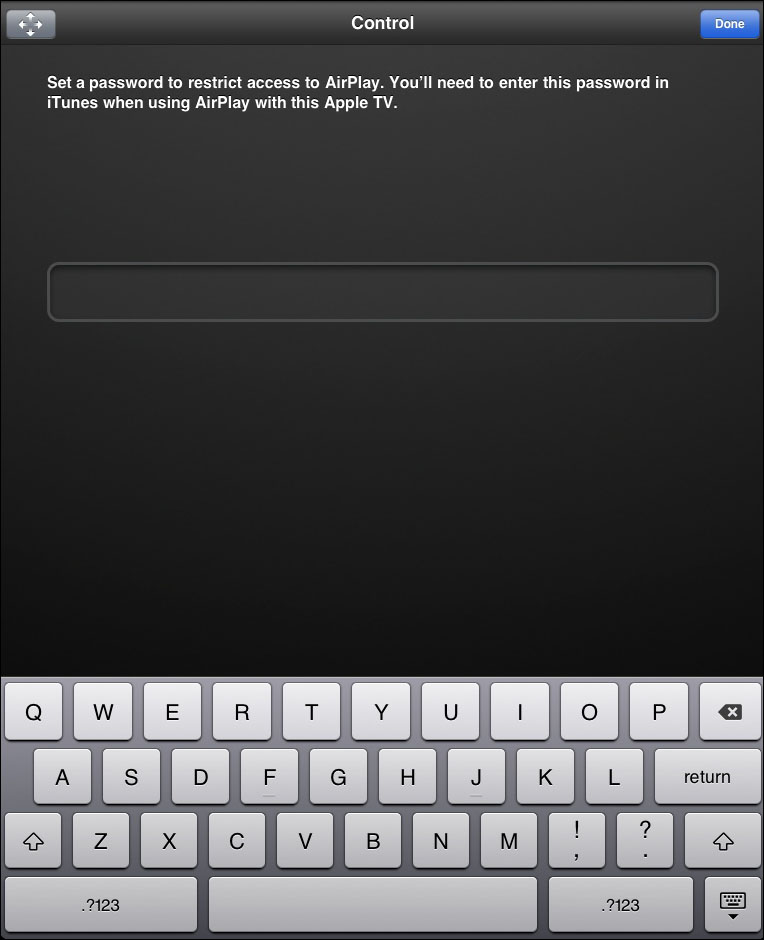 Control iTunes on a Computer with Remote — The Remote app uses a Wi-Fi connection to control one local iTunes library at a time. However, the Remote app and iTunes have to get to know each other. The first time you launch Remote, you’ll see a screen that offers two methods for acquainting them — Add an iTunes Library or Home Sharing. Either option appears to work well, but Apple’s knowledgebase article suggests using Home Sharing.

You can connect to only one Home Sharing account, but (at least theoretically) you can also connect to one or more iTunes libraries.

Home Sharing — If you are already sharing your iTunes library with Home Sharing, you can connect the Remote app to the library through Home Sharing. You need an active Internet connection so Apple can verify the Home Sharing Apple ID. 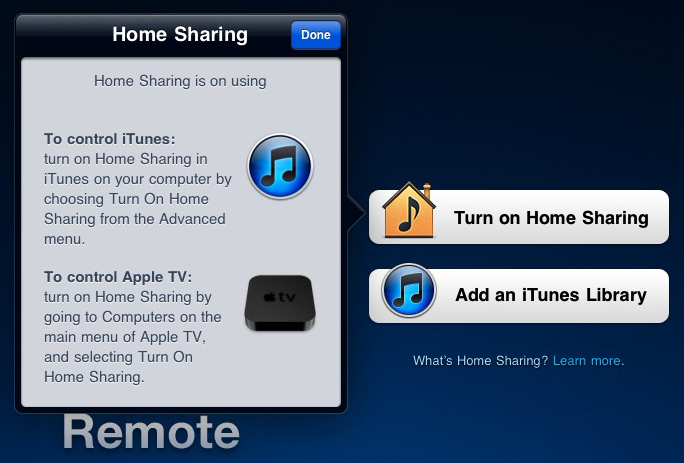 Now that you’ve connected with your iTunes library, you’ll see the name of the library at the top of the Remote sidebar.

Tip: If you can’t connect Remote to iTunes, first try restarting your iPad and quitting and relaunching iTunes on your computer. If that doesn’t help, consult this somewhat geeky Apple article for more advice.

Add an iTunes Library — This easy method requires that you make a physical connection between the iPad and the computer.

Here’s how to make the connection:

Now that you’ve connected the Remote app with your iTunes library, you’ll see the name of the library at the top of the Remote sidebar.

To disconnect Remote from an iTunes library permanently, from the main Remote screen, from the top of the sidebar, tap the library name. Your options are as follows:

Tip: To disconnect a copy of iTunes on a computer from all Remote connections, open the iTunes preferences, click the Devices button on the toolbar, and then click the Forget All Remotes button.

Run iTunes with Remote — When Remote is connected to an iTunes library, you can operate Remote on your iPad screen to play media in iTunes on the computer remotely. As you tap options in Remote on the iPad, you can even watch the iTunes window change on the remote computer. Remote uses similar controls for locating and playing music as those employed by the iPod app; in fact, you may have to look closely to see the difference.

If you’d like to use Remote to send playback from the computer to some other device via AirPlay, you can — read “Control AirPlay in iTunes,” ahead.

Note that if someone quits iTunes on the remote computer, Remote cannot launch the app and begin playing media.

Control AirPlay in iTunes — With Remote, you can choose where iTunes sends its audio via AirPlay. The AirPlay control appears in two places within Remote:

If you have a second-generation Apple TV on your network with AirPlay enabled, it appears as an AirPlay audio destination, too. Wrap your head around that for a second: You can tell iTunes on your computer to send its audio to the Apple TV via a command from your iPad — that’s what I call a digital entertainment ecosystem!

Note that when you turn an AirPlay audio destination on or off, playback pauses for a few seconds while iTunes synchronizes the music stream.

Set Up a Second-Generation Apple TV with Home Sharing — The second-generation Apple TV comes with an attractive metal remote control; it almost looks like a work of art. And yet, given how much more control the Remote app on the iPad gives you, the only reason to keep it around is as an emergency backup. Perhaps you can put it in an attractive display case on your coffee table while your iPad does the real work.

But, before you put away the metal Apple Remote, you need it to set up Home Sharing on your Apple TV so that the Remote app can later control the Apple TV:

Once the Apple ID and password are verified (your Apple TV must be connected to the Internet for that), all the iTunes libraries on your home network that have Home Sharing turned on appear in the Computers column of the Apple TV main menu. What’s more, your iPad’s Remote app can now control your Apple TV. To make the connection, follow the steps in “Home Sharing,” earlier.

Add a First Generation Apple TV — Do the following to pair the iTunes library on your Apple TV with the Remote app on your iPad:

Yes, using the Apple remote to laboriously enter the passcode on the Apple TV screen isn’t much fun, but once you’ve done so, your iPad can take its place.

To disconnect a first-generation Apple TV library from Remote, tap the name of the active library at the top of the Remote sidebar. On the Settings screen, tap Edit, and then tap the X button that appears by a library.

Control an Apple TV — You can use the Remote app to control media playback as described in this chapter so far. However, another option appears when you’re connected to the Apple TV: Control. To access the Control screen for the Apple TV that Remote is currently controlling, tap the Control button at the lower right of the main Remote screen.

The nearly blank Control screen operates as a virtual trackpad: Drag to move the selection highlight among the Apple TV’s menus and tap to select an item. 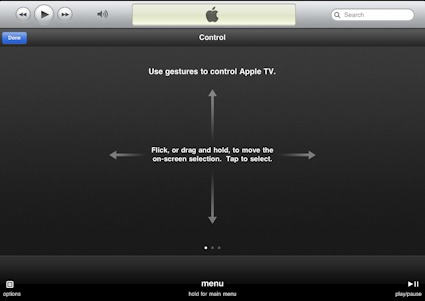 To navigate back one level in the menu hierarchy, tap the menu button.

If options are available (for example, to mark a TV show as watched), tap the Options button at the lower left. Tap Done to return to the main Remote screen.

To switch among different organizational tabs, such as listing podcasts by date, show, or watched state, flick left or right.

The Control screen enables other non-obvious but helpful controls.

For video, do the following:

For audio, these commands are available:

Take Control of Media on Your iPad — The Remote app is just one way to use your iPad as a media hub. Using the iPad, you can watch movies, listen to music, read ebooks, view photos… and just as important, wrangle the content for getting it onto your device or accessing it wirelessly. I cover it all in “Take Control of Media on Your iPad, Second Edition,” a 158-page ebook that’s available for only $15 (or less, if you bought the previous edition).

Comments About Use Your iPad as a Remote Control