Firefox 4.0.1 — From the Mozilla Foundation comes Firefox 4.0.1, an ostensibly minor update that packs in numerous bug fixes for everything from memory leaks to security issues. While the majority of the changes affect elements of the app that are not immediately obvious to end users (beyond the occasional crash), a few fixes were prompted by certain Web sites, like Yahoo Answers and Amazon, failing to function properly in small ways. Mozilla recommends the update for all current users of Firefox 4.0; see our full review in “Firefox 4 Improves, But Not Radically,” 2 April 2011.
(Free, 26.8 MB)

MacGourmet 3.1 — Advenio has released version 3.1 of MacGourmet, its recipe management software that lets your collect and organize your favorite dishes on your Mac (for a comparison with other programs, see “Cook from Your Mac: 10 Recipe Tools Compared,” 21 September 2007). Highlights of the changes in MacGourmet 3.1 include the capability to download and import recipes from over forty popular Web sites, support for blogging, and many improvements in the way ingredients are handled. In addition, MacGourmet 3.1 addresses a large number of bugs that touch on pretty much every aspect of
the app; full release notes are available. ($29 new from Advenio or the Mac App Store, free update, 12.7 MB)

Microsoft Office 2008 12.2.9 / 2004 11.6.3 — Refusing to leave those who haven’t upgraded behind, Microsoft has released a couple of updates for older versions of the Office suite — the 2008 edition has been bumped to version 12.2.9, while its 2004 counterpart is now at version 11.6.3. The Office 2008 update requires Mac OS X 10.4.9 Tiger or later and includes a
number of security, stability, and performance improvements, additional support for Microsoft’s SkyDrive cloud-based file sharing system, improved compatibility with the SharePoint enterprise collaboration system, and individual fixes for both Entourage and PowerPoint. The Office 2004 update, which needs 10.2.8 Jaguar or later, contains only unspecified security fixes. (Free updates; 333.1 MB for 2008, 23.4 MB for 2004)

Mactracker 6.0 — Ian Page has released version 6.0 of his encyclopedia of Apple hardware, Mactracker, adding new features and updates to its extensive database of nearly every Apple hardware product ever made. Each entry contains plenty of detail, including technical specs, the original sale price in 10 different markets, and benchmarking data (you can even compare the specifications of up to four devices). The most significant enhancement is a complete overhaul of the app’s interface, featuring a new in-window search function and “smart categories” whose contents are based on a search query. (Free from Ian Page’s Web site
or the Mac App Store, 21.9 MB) 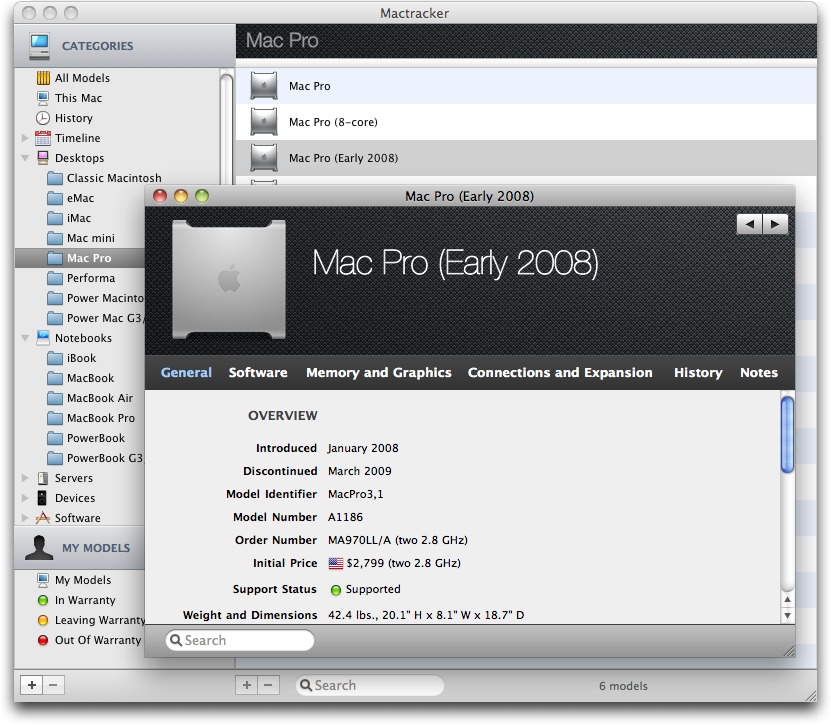 Quicksilver β59 — The open-source launcher Quicksilver β59 has been released, adding numerous features and plug-ins, and fixing plenty of bugs as well. Improvements include auto-updating, a new menu bar icon, an Open URL in Background action, performance improvements, and changes that will enable Quicksilver to be a 64-bit application in the future. But much of Quicksilver’s power lies in its many plug-ins, which enable it to integrate with other applications. This new version includes new plug-ins for Yojimbo, 1Password, and Cyberduck, along with fixes and changes to a number of others. Numerous bugs have also been fixed, although
reports on the Quicksilver Google Group indicate there are still issues. (Free, 1.8 MB)

Mailsmith 2.3.1 — Stickshift Software has released Mailsmith 2.3.1, which fixes a bug that prevented Space-bar navigation from working properly, plugs some memory leaks, and avoids checking the installed version of SpamSieve to avoid problems with newer versions of SpamSieve. (Free, 25 MB)

Evernote 2.1 — Those relying on the popular Evernote service can now download Evernote 2.1 for the Mac, which brings a number of notable features to the information gathering application. (Versions are also available for various Web browsers; the iPad, iPhone, and iPod touch; Android; BlackBerry; Palm Pre and Pixi; and Windows and Windows Mobile.) Most notable in Evernote 2.1 for the Mac is audio recording, which allows audio to be attached to any new or existing note. Audio can also be played back within the
Evernote application. Then, for those who thrive in the public sphere, there’s note sharing via Facebook, Twitter, and email, or via a direct URL. Searching is now faster, especially for large accounts, the Find In Evernote menu item now works properly, and other unspecified bugs have been fixed. One note: if you’ve customized your toolbar, you’ll have to do so again after the upgrade. (Free, 19 MB)

iPhoto 9.1.2 — Along with adding new card themes to iPhoto ’11, Apple’s recent iPhoto 9.1.2 update addresses a number of minor bugs, mostly related to the application’s interface. The zoom slider now works properly in Magnify (1-up) view, toolbars auto-hide in Full Screen view, the message size of email messages now updates correctly when changing the Photo Size menu, multiple book pages can now be drag-selected in All Pages view, design tools in print projects are now accessible via separate Layout and Options buttons, and the Tab key can now navigate through all the text fields in a book project. In addition, the
update fixes minor formatting issues with book, card, and calendar themes, and preserves photo backgrounds when the book type is changed. Lastly, the search field now correctly performs an “includes” search when searching by text string, and a bug has been fixed that prevented some iPhoto 5 libraries from upgrading correctly. ($14.99 new, free update, 106.32 MB)

iMac Hard Drive Firmware Update 1.0 — If you have a mid-2010 iMac, Apple has just released the iMac Hard Drive Firmware Update 1.0 to resolve a problem that might prevent your iMac from booting properly. Although there’s no way to know if you really need this update or not, the inability to boot could make installing this update in the future significantly more difficult, so I’d recommend doing it now, after making sure you have a current backup. (Free, 767 KB)