I’m continually fascinated by how some people — myself included — fret over relatively small expenses because they seem out of proportion, and nothing winds me up like SMS text messages. These 160-character messages cost cellular carriers literally next to nothing, and yet they’re priced so usuriously that they give new meaning to being “nickeled and dimed.” One researcher even calculated that it’s significantly cheaper to communicate with the Hubble Space Telescope, and there’s a wonderful article that calculates that it would cost nearly $6000
to transmit a 4 MB MP3 via SMS.

Of course, if your thumbs have dents from hundreds of thousands of text messages, the cost is probably immaterial — you’re likely happy paying a fixed monthly fee for unlimited text messaging (and the cellular carriers are still making plenty of profit from you).

No, the people who cringe every time the iPhone buzzes with a new text message are those, like me, who use text messaging sufficiently infrequently that it doesn’t make financial sense to buy even the smallest bundle of text messages.

So those of us who can’t stomach coughing up nearly as much for text messages as we pay for far-more-useful 3G data are stuck paying $0.20 to $0.30 per message. Many of us begrudge the cell carriers every penny of it, especially when we never come close to using all the voice minutes or megabytes of data we’re required to pay for as well. It’s not that a quarter is a lot of money; it’s the unholy combination of knowing that the resources consumed cost as close to zero as possible and that the value to us is nearly as low.

Don’t get me wrong — I’m not arguing from any sort of a Luddite position here. I know full well how to send and receive text messages, and Tonya and I have even spoken with our parents about how texting is now a required 21st century skill, since text messages can slip through when the cellular coverage is minimal or in disaster scenarios when cell networks are otherwise overwhelmed (see “Peering Inside a Mobile Phone Network,” 6 October 2008).

Nonetheless, since there are so few people I communicate with regularly via text message, I’ve started using a service and iOS app combination called Textie that uses your Internet connection to send messages. Textie is free, supporting itself via ads interspersed within the messages you view and via direct payments from those who are willing to pay $1.99 to turn the ads off. Although I’ve mostly used Textie on the iPhone, it also works on the iPad, where it has a full native interface, and the iPod touch, neither of which can normally use SMS messaging.

Once you download and install the Textie app, setup involves teaching it your email addresses and phone numbers, since that’s how Textie knows to route incoming messages to your copy of the app, alerting you via push notification, just as an SMS text message would. (Tip: If you get a new iPhone, note that you must sign into Textie before you’ll receive push notifications again.) If another Textie user sends you a message via an unknown phone number or email address, Textie will still deliver it, but via normal SMS or email instead.

After that, using Textie is eerily like using Apple’s Messages app. The main screen listing existing conversations is nearly identical, with the only notable differences being Textie’s Settings button and refresh button at the bottom of the screen. An Edit button lets you delete unwanted conversations and a compose button lets you start a new conversation, messages in which can contain both text and an attached picture. 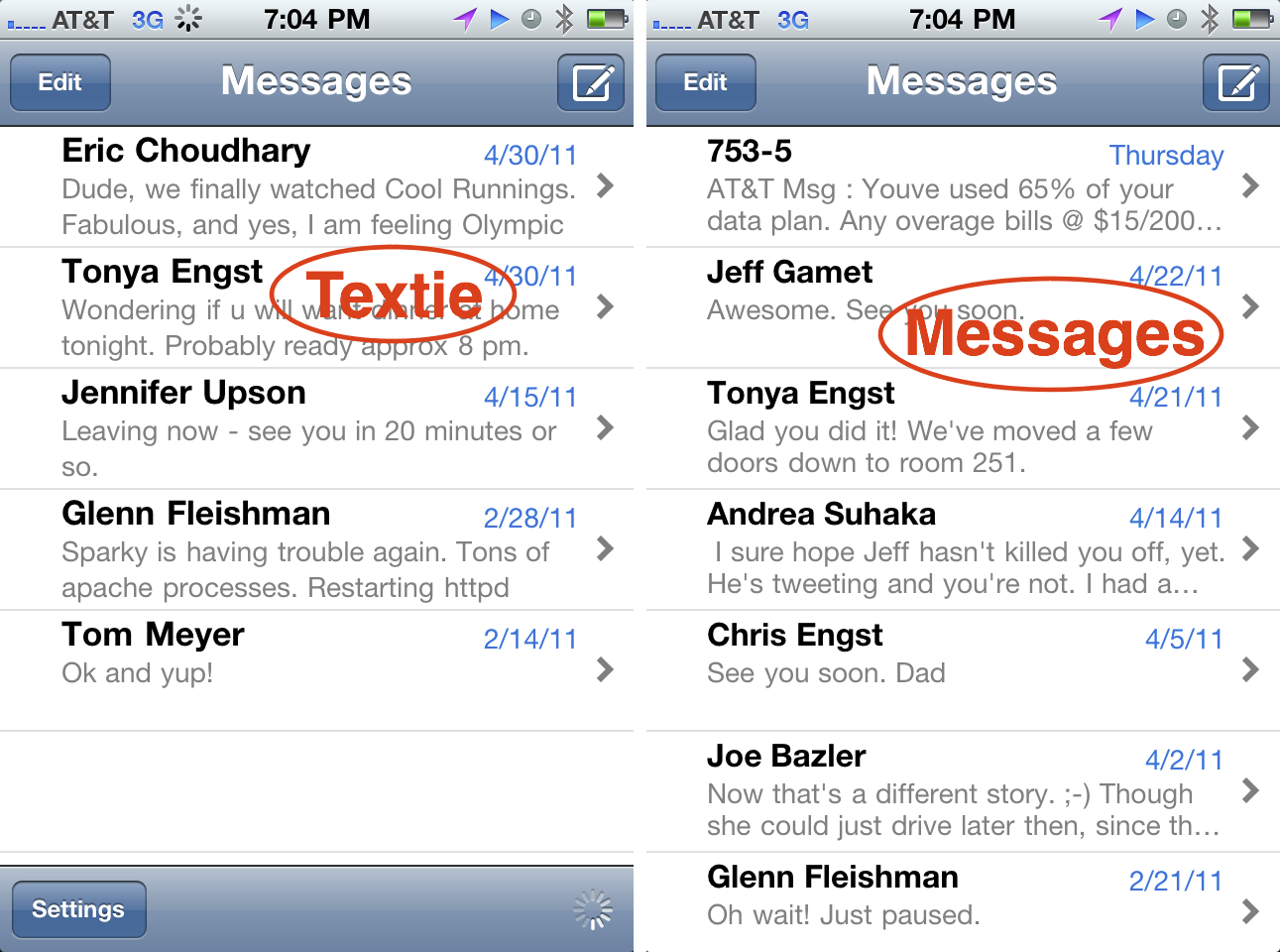 Within a conversation, the look is just a little different, with Textie going beyond Messages by offering three different text sizes and conversation bubble colors, selectable in Textie’s Appearance settings. And of course, there are the ads, which are custom designed to mingle within the messages and thus don’t bother me at all. If they bother you, they can be turned off for a $1.99 in-app payment. Textie mimics the Call and Contact Info buttons at the top of the conversation, and adds a Load Older Messages button
for pulling older messages back out of Textie’s local database. In both the wide-screen iPad interface and the smaller iPhone interface, you can even swipe over any individual message to delete it, as you can see in the iPad screenshot. 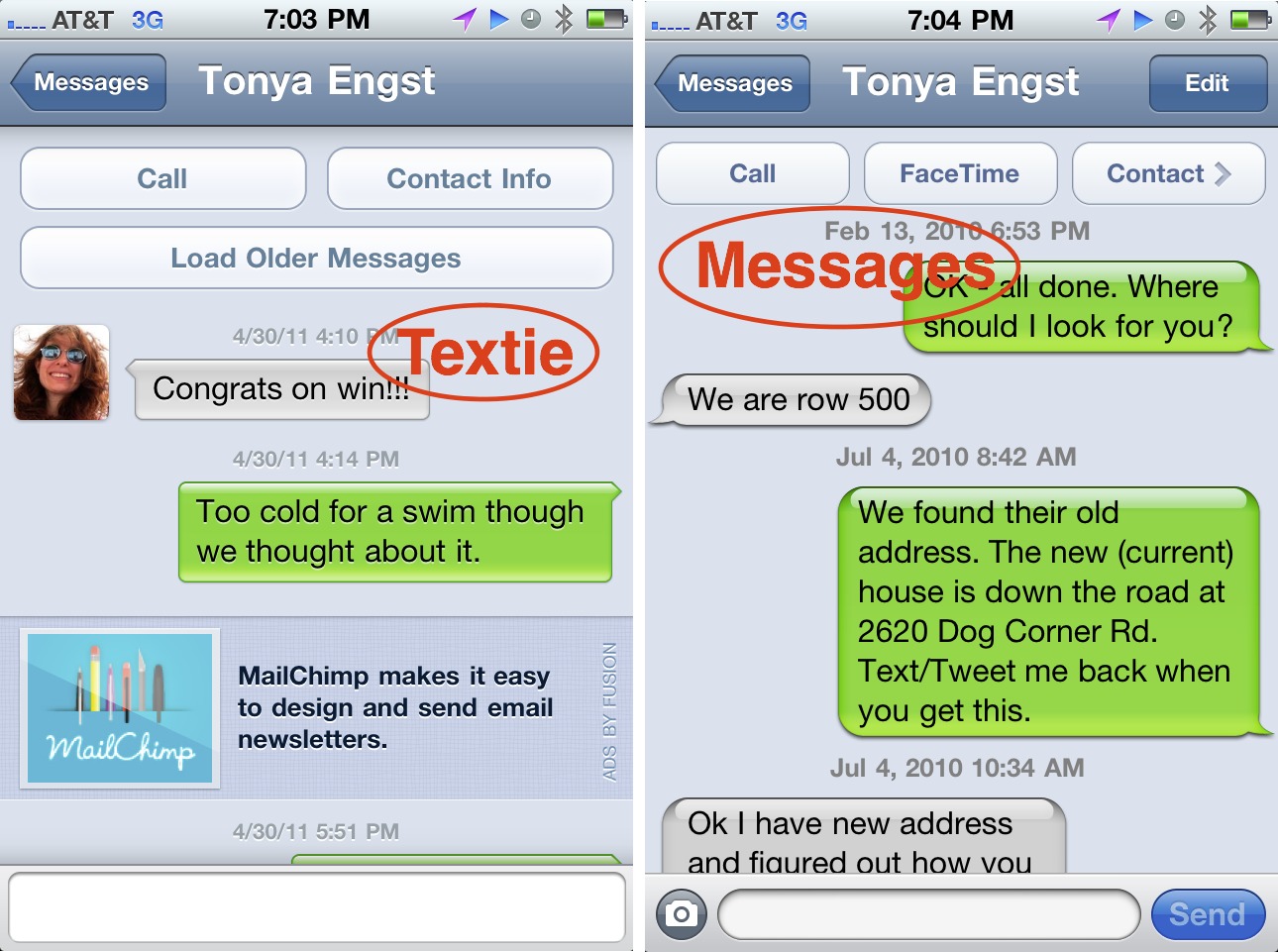 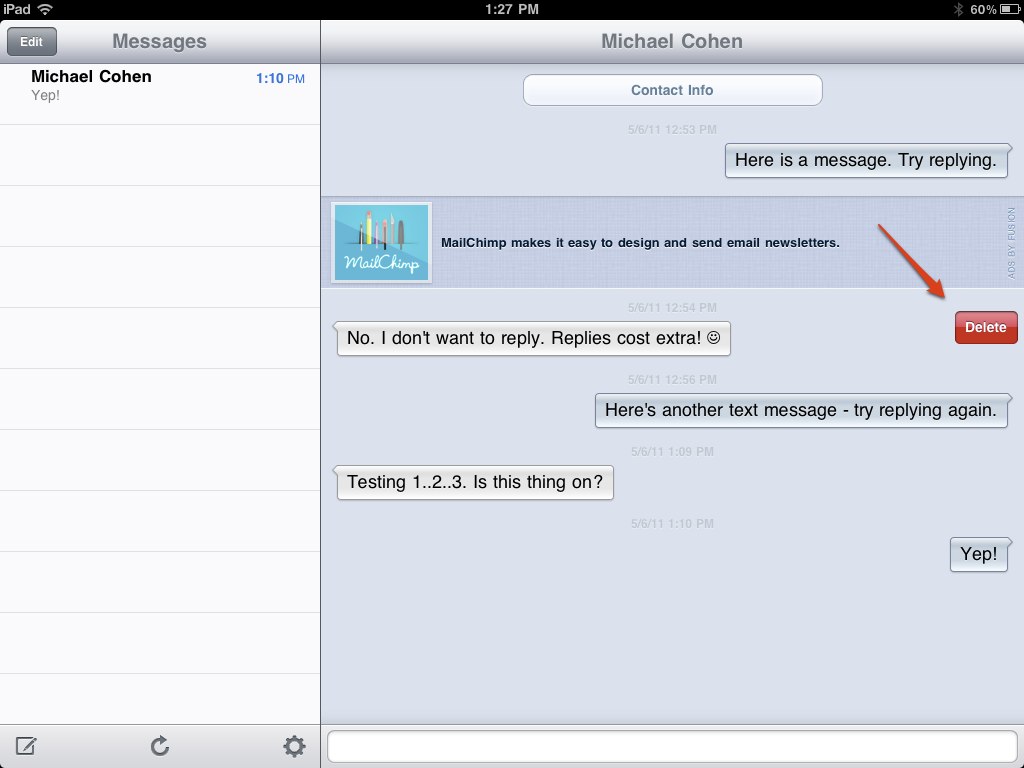 Textie’s settings also let you turn off the message preview in push notifications (in case you don’t want others to be able to read the message without unlocking the phone) and display the sender’s verified address for additional identification. I hate getting SMS messages from unknown numbers since people
seldom identify themselves. You can also turn message sounds on or off.

One neat Textie feature in the Social Networking settings is the capability to see which of your friends already use Textie. The way this works is particularly clever, and much better than the way many services import your entire address book. First, Textie reads and scrambles all the email addresses in Contacts with a one-way hash, meaning it can’t be reversed (for privacy reasons). Then it compares those scrambled addresses with equivalently scrambled addresses for all users on the Textie server and displays a list of those addresses in Contacts that match addresses of Textie users.

You can use Textie to send and receive text messages with anyone who has an email address anywhere in the world, and you can also use it to send text messages to many U.S.-based mobile phone numbers (Textie doesn’t work with Sprint or T-Mobile right now). Apparently, international cellular carriers generally lack the email gateways that Textie relies on in the United States.

With email, Textie appears to deliver the message from your “sending as” address, but sets the Reply-To header such that replies should go back through Textie. Textie messages to normal mobile phones are similar, in that replies also come back through to Textie even though they appear to come from some random phone number (they include your name, so the recipient knows who the message is from). The very first mobile phone text message someone receives from a Textie user includes some text explaining what Textie is, since recipients were being confused. Subsequent messages to the same number don’t include the explanation.

Overall, Tonya and I have found Textie extremely easy to use and entirely reliable, with one unsurprising exception. While we were on our recent trip to Boulder, I got up early one morning to run the famous Magnolia Road. I didn’t think my iPhone would have good coverage and didn’t want to carry it on a 15-mile run, but it was important that Tonya knew when I started so she could call out the dogs if I didn’t come back in a reasonable amount of time.

When I arrived at the start of the run, up an insanely steep and switchbacked road that climbed to an elevation of over 8000 feet, my iPhone was desperately trying to hold onto a single bar of signal, and when I attempted to use Textie to send Tonya a message that I was starting the run, it failed. Textie was happy to let me retry the message, but since it relies on an Internet connection rather than the SMS network, it stood no chance of working without a data signal.

I switched to the Messages app, sent Tonya an SMS text message for $0.40 ($0.20 for me to send, $0.20 for her to receive) and headed out on my run. I repeated the process when I was done, and with her eventual reply to me, we racked up $1.20 for what was probably less than 400 bytes and fewer words than are in this sentence.

With Textie, the cost of those three sent-and-received messages might have been $0.00012 (Textie messages aren’t quite as small as SMS messages, but they’re so small even the developers haven’t bothered to check, given server compression and other message-related communications). Or, since our AT&T family plan offers free mobile-to-mobile calling within AT&T’s network and free unlimited calling to a set list of numbers, had there been voice coverage, I could have talked to Tonya and others for the entire 2 hour run for free.

So no, $1.20 isn’t a lot of money, until you start comparing it to $0.00012 via Textie. If we both sent and received just 50 normal SMS text messages per month, it would be worth paying $10 per month each for AT&T’s 1000-message bundle, and that’s $240 per year for the two of us, which counts as real money in my book. Especially when compared with the $0.14 — or less, since some would be sent while using Wi-Fi instead of 3G data — that the same 1200 text messages might cost us via Textie.