We’re pleased to welcome as our latest TidBITS sponsor Cirrus Thinking, creators of the Dolly Drive software and service that brings online backups to Apple’s Time Machine. First launched at Macworld 2011, where Dolly Drive garnered the Best Software and Best of Show awards from MacLife, Dolly Drive’s goal is to extend Time Machine in ways that eliminate some of Time Machine’s limitations. (And yes, Dolly Drive is named after the sheep Dolly, the first mammal to be cloned.)

Most notably, Time Machine by default offers only local backups, but as became painfully clear during the recent earthquake and tsunami that devastated portions of eastern Japan, offsite backups are an essential part of any backup strategy. With Dolly Drive, your Time Machine backups are sent to Dolly Drive’s datacenters around the United States and Europe. Plus, you can use Dolly Drive’s Inclusions Assistant to select just what you want to back up, which is more precise than the way Time Machine lets you exclude folders and disks. Also lacking in Time Machine is any way to create a bootable clone; Dolly Drive enables you to make a bootable clone to a local hard disk so you can start working again quickly should your Mac’s hard
drive fail. 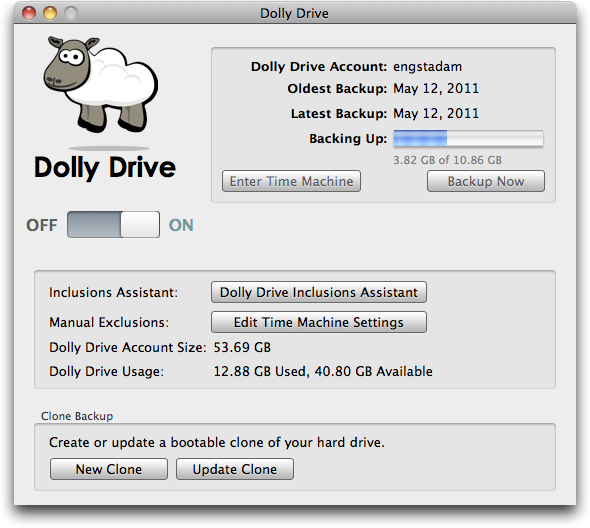 Dolly Drive’s backup plans start at $5 per month for 50 GB of storage and go up to $55 per month for 2 TB of storage. With all plans, Dolly Drive rewards subscribers with an extra 5 GB every month, so your storage space automatically increases as your hard disk fills up. The 2 TB plan is brand new, and for those who can’t imagine uploading so much data, Dolly Drive is also starting the Dolly Seed program, in which they send you a hard disk that you use to create an initial Time Machine
backup, after which you return it to them and continue backing up via your Internet connection.

As with all cloud-based services, security is important, and to that end, Dolly Drive authenticates all local sessions, encrypts all data, transmits all the encrypted data through a secure tunnel, and encapsulates your data within virtual storage technology that requires your direct authorization for access.

I’ve been playing with Dolly Drive for a bit now, and for the most part, it’s working just like Time Machine, albeit more slowly due to having to send and receive data across my Internet connection rather than a local hard disk. See Dolly Drive’s Getting Started page for a step-by-step tour of how it works.

It’s nice to see Dolly Drive extending Time Machine, and the programmers at Dolly Drive have lots of other ideas for enhancements, ranging from supporting local and online destinations simultaneously to scheduling clone updates.

Thanks to Dolly Drive for their support of TidBITS and the Mac community!