It’s easy to become so accustomed to certain Mac OS X behaviors that when they change and your old habits no longer work, you actually start to question your sanity. That’s what happened to me — and Tonya admitted to a similar feeling, too — when we realized recently that Apple changed the way you remove items from the sidebar in Finder windows in Mac OS X 10.6.7.

As a result, we’ve found that we like popping a folder into the sidebar while we’re working on its associated project, and pulling it out as soon as we’re done — it provides quick access for active projects. That’s what I do with each successive Take Control book, for instance.

With 10.6.7, however, Apple not only messed up (and then fixed) font handling (see “OpenType PostScript Fonts Troublesome in 10.6.7,” 27 March 2011, and “Apple Releases Snow Leopard Font Update,” 26 April 2011), they also changed the way you remove items from the sidebar. Now, instead of just dragging items out, you must either Command-drag them out or Control-click them and choose Remove from Sidebar. 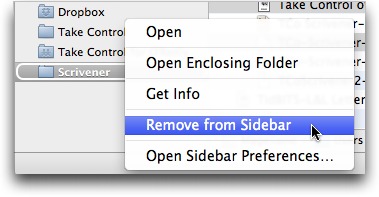 All I can think is that people were complaining about accidentally removing items from the sidebar because it was too easy to drag them out; by requiring either a Command-drag or choosing a contextual menu item, Apple has ensured that it’s nearly impossible to remove an item by mistake. In fact, comments on Twitter indicate that it’s common for inexperienced users (the stereotypical parents) to remove items from both the sidebar and the Dock and then be confused. Perhaps we can expect to see a
similar change for the Dock at some point in the future.

This new method of working isn’t a huge deal, but it would have been helpful of Apple to mention the change in the release notes for 10.6.7. That’s what they’re for, after all. Apple did post a support article explaining how to remove an item from the sidebar, but even that never acknowledges that the behavior changed.