As a part-time but active freelance photographer, I copy a lot of photo files from SD cards to my iMac’s hard disk. I’m generally very happy with the iMac I bought late last year to replace the Windows system I had used for a few years previously. The iMac has a beautiful display, and since Adobe Lightroom 3 started to take advantage of 64-bit processing, I’ve been able to process hundreds of images on the iMac faster than I ever could before.

One of my few minor complaints with the iMac was that the placement of the USB ports on the back makes them hard to get to. My first solution to this problem was to add a USB hub. The hub sits on my desk under the iMac’s display where I can reach it easily. I put my SD cards into a small card reader and plug them into the hub.

At this point I have to confess that, if the iMac came with a User’s Guide, I never read it. So I had been using this wonderful machine for many months before I discovered, not long ago, that there are two slots on the right side of the iMac’s display: a larger slot for the iMac’s SuperDrive to accept CDs and DVDs, and a smaller SDXC slot designed specifically to accept SD and SDHC photo storage cards. I don’t have much use for the optical drive, but I was happy to discover the SDXC slot and stop using the USB-based card reader.

Oops! — That is, I was happy until I got the two slots confused. When I first discovered the SDXC slot, I used it carefully, leaning around to view the side of the iMac when I inserted the card. But it soon became routine and I stopped paying much attention. And then, about a week ago, I blindly reached around to the side of the iMac and accidentally inserted an SD card into the optical drive bay. When an SD card is inserted properly into the SDXC slot, it doesn’t actually disappear inside the slot the way a CD does. A little bit of the card sticks out of the bay so, when you unmount it from your desktop, you can grab it and remove it. I knew I’d goofed as soon as
the card disappeared completely inside the optical drive bay. 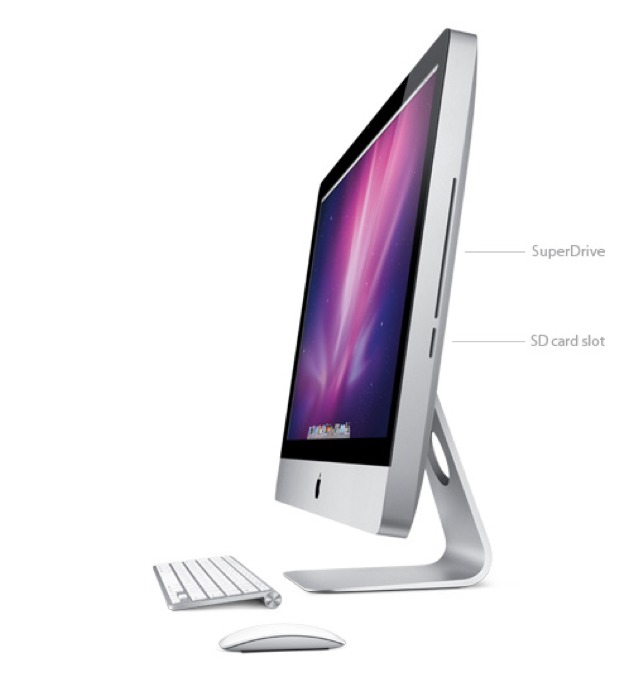 The optical drive bay has a fuzzy double curtain, presumably to keep out dust. It also makes it nearly impossible to look inside to, say, figure out what became of that SD card you accidentally shoved in. And it wasn’t clear what the best way to remove the card would be.

With some embarrassment, I explained what I had done to some of the Mac power users in the TidBITS author and editor community, and asked for suggestions. I was surprised to discover that I wasn’t the first person to whom this had happened, nor the second, nor even the third. And this was a group of highly capable, savvy users.

Paper Clips Rule — Eventually I was able to extract the card from the optical drive. I unplugged the iMac completely, carefully turned the thing on its side (yes, this was awkward, given its weight) and, hoping to jostle the SD card up close to the fuzzy curtains, I very gently tapped the side of the iMac against the top of my desk.

Then I turned to the Mac user’s oldest and most versatile repair tool: a big, bent paper clip. I poked around blindly — and again very gently — inside the optical drive bay for several minutes without success until — eureka! — a tiny tip of the SD card peeked through the drive curtains. After that it was fairly easy to pull it out just a little more, until I could grab the end with my fingers and extract it.

After righting the iMac and plugging everything back in, I tested the SuperDrive and the rescued card. I’m happy to report that everything seems to be working fine. All’s well that ends without a repair bill or a trip to the Apple Store.

Elegance Versus Usability — I’m happy to stipulate that I did a dumb thing, and I will certainly try not to make the same mistake again.

Even so, I think it’s pretty clear that the iMac practically invites this mistake. The placement of the two slots on the right side hides them elegantly from sight. But this elegant invisibility, combined with the proximity of the slots, makes it easy to slip up as I did.

Put bluntly, the position of these slots is a case of bad industrial design, and one that could be easily eliminated in a future iMac design. Apple could simply give the two slots more vertical separation on the right side of the iMac. Or, in moves that might involve more significant internal rejiggering, Apple could change the orientation of the SDXC slot from vertical to horizontal, or move it to the left side of the iMac.

Visual elegance and usability don’t have to be incompatible. I love my Magic Trackpad, for example, now that I’ve learned the various gestures that make it work. But with the iMac, the charge that Apple sometimes sacrifices usability in favor of elegance may have merit. Beyond the placement of the SDXC slot, I’ve observed a number of other industrial design decisions that seem to trade usability for elegance. For instance, you can’t adjust the height of the display (other than by stacking it on books), and the USB and other ports on the back side of the iMac are deucedly hard to get to. Then there’s the placement of the power button on the back of the iMac on the lower left side, which hides the button nicely, but makes it
easy to put the iMac to sleep when grabbing the lower corners of the case to adjust its position or viewing angle.

There’s no question that the iMac is a gorgeous piece of design, and resolving some of these usability issues might hurt its aesthetics. Nonetheless, I hope Apple at least considers these usability issues in future designs. And in the meantime, if you have an iMac and use the SDXC slot, be careful where you stick those SD cards!

Comments About iMac Users, Be Careful Where You Insert that SD Card