Before today’s Worldwide Developers Conference keynote, we knew Apple was going to announce a new iCloud service that would likely augment or replace MobileMe. Now, we can see that iCloud isn’t just a new feature; it’s a new platform for interacting with our data on various Apple devices that may even make us forget that we ever needed to “sync” the machines.

The iCloud storm won’t roll in until Apple releases iOS 5 in the fall (roughly September to November), but at least one element, iTunes in the Cloud, is operating now. iCloud will be a free service, and it replaces MobileMe (more on that transition below). A beta of iCloud is available to developers today, so they can start to prepare apps to work with the service.

For those unfamiliar with recent buzzwords, “the cloud” is a shorthand way of referring to data and services provided by online sites, rather than by your computer, smartphone, or tablet. Dropbox, for example, stores your files on Amazon S3 and then copies them to the devices on which you have Dropbox software installed (or on which you have apps that can access that data). We’ll have an extensive explanation of what “the cloud” means in an upcoming article.

Although the same principle applies to iCloud, the way Apple is implementing the service promises to dramatically change how you interact with your data. Instead of dragging your iPhone, iPad, or iPod touch back to a Mac or PC to copy songs or documents between devices, everything is copied to iCloud and duplicated on all your devices. Photos appear automatically, whether they were saved into iPhoto or captured using an iPhone camera; changes in a Pages document on your Mac appear when you open the document in Pages on your iPad. As Steve Jobs repeatedly stated, “you don’t have to learn anything” in order to take advantage of iCloud.

Apple announced several components that make up iCloud: working with music in iTunes and a new paid iTunes Match service; working with data such as calendars, contacts, email, apps, books, and miscellaneous data backups; storing and sharing photos; and sharing documents among devices.

iTunes in the Cloud — People with large iTunes music libraries have often needed to make a choice when syncing to an iOS device with a limited amount of storage: which albums and playlists to include? If you want to listen to a song you didn’t sync, you’re sunk. With the iTunes in the Cloud feature, all music you’ve purchased from the iTunes Store is available for immediate download.

In fact, you can test it out right now. Open the iTunes app on an iOS device, and tap the Purchased button at the bottom of the screen. Tap the Not On This iPhone (or iPad, or iPod touch) button to view a list of artists, and then tap an artist name to view albums or songs you own but that aren’t currently on the device. To download the songs, tap the iCloud download button. 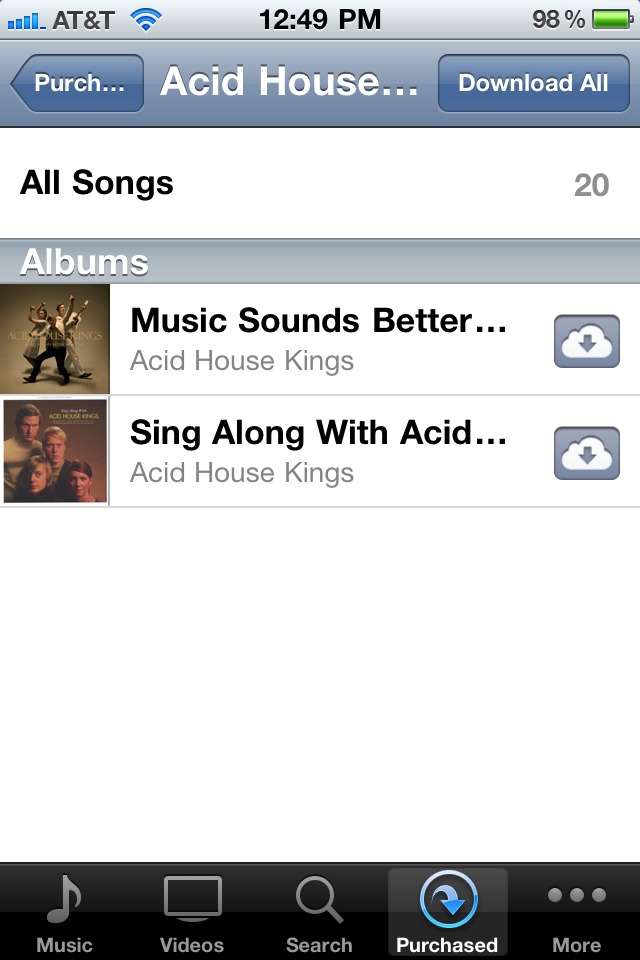 When you purchase music on any device, you can choose to have it copied automatically to up to ten authorized devices. (To enable this feature, go to the Store preferences on an iOS device and turn on the Music option.) So far, this functionality is available only for music, not movies or television shows purchased at the iTunes Store. 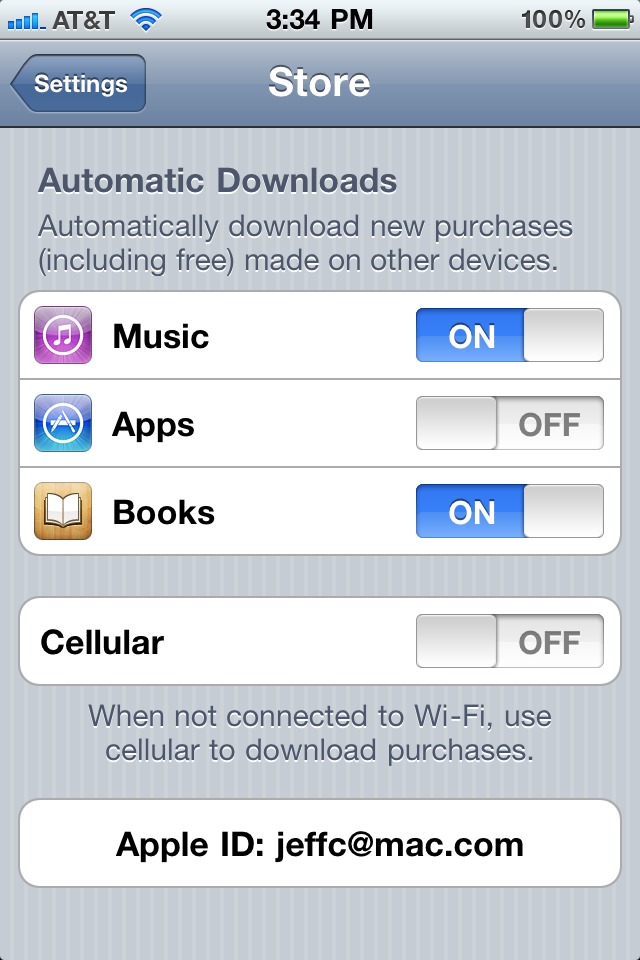 iTunes 10.3 adds this functionality to the Mac and Windows application, and although Apple had not yet made the download available when this article was initially published, it’s now showing up in Software Update.

iTunes Match — What about the music you purchased elsewhere or ripped from CD yourself? For a $24.99 yearly fee, iTunes Match makes those songs available, too. iTunes uploads a list of songs in your library (much as it does now for the iTunes Genius results) and matches them (probably using music fingerprinting) against Apple’s collection of 18 million tracks. If you choose to download a track to a device where it doesn’t appear, Apple provides a version at iTunes Plus quality (256 Kbps and free of DRM), even if your original copy was ripped at a lower quality.

Unlike similar cloud services by Amazon and Google, iTunes Match doesn’t require you to upload your entire music library, only a list of tracks. If you wish, however, you can upload songs that don’t match up, so you can download your rare bootleg recordings on the fly, too.

iTunes Match will arrive with the full iCloud set of features. It’s unclear what happens if you let the yearly subscription expire; presumably your uploaded files are deleted and you no longer have access to matched songs on other devices (other than syncing them manually).

Data in the Cloud — If you’re already a MobileMe subscriber, you’ve long had a taste of cloud syncing with events, email, contacts, and iBooks titles. iCloud continues to make those bits of information available on all authorized devices over the air, but adds the capability to sync other types of data.

As with iTunes in the Cloud, items purchased from the App Store can be downloaded to other devices, either manually or automatically; this feature is in beta and available now.

Things get more interesting for documents such as those created by Pages, Keynote, and Numbers (or any app, once developers have incorporated iCloud support). iCloud may finally deliver on the promise of iWork.com and allow us to ignore the horrible sync-through-iTunes approach for sharing documents among devices. As demonstrated at the keynote, making an edit to a document on an iPad incorporates that edit on other devices. So instead of syncing a file before leaving for the office, you can just open it on another device or computer and have the most recent version. That said, Apple gave no details that would imply that iCloud can be used for collaboration between people, rather than for moving data between devices.

For general purpose data, iCloud provides off-site backup for important information stored on an iOS device using the Backup feature. iCloud automatically backs up purchased music, apps, and books; photos and video in the Camera Roll; device settings; app data; home screen and app organization; text and MMS messages; and ringtones. If you need to restore a device or purchase a new one, those items are downloaded from iCloud.

Photo Sync and Stream — Part of iCloud is the new Photo Stream, which looks like a life-enhancing option for anyone who’s ever taken photos on an iPhone and wanted to work with them in iPhoto or display them on an iPad. Or those of us who have taken photos on a digital camera, found the time to upload them to iPhoto, but then failed to sync them to the iPhone. You likely know the drill.

With Photo Stream, when you add a photo to a device, perhaps by taking a photo with the Camera app on your iPhone or by adding photos to iPhoto on your Mac, Photo Stream automatically uploads the photos to iCloud’s servers (using Wi-Fi or Ethernet) and then sends them down to all your other devices, including a second-generation Apple TV, the Photos app under iOS, iPhoto on a Mac, and the Pictures Library on a Windows PC. The Photo Stream on an iOS device stores only the most recent 1,000 photos (but storage on Macs and PCs is limited only by your own disk space). iCloud’s servers will store a photo for 30 days. To keep photos on a device after that, move them into an album on the device.

What Happens to MobileMe? Steve Jobs made it clear that MobileMe is not long for this world, saying, “You might ask: Why should I believe them? They’re the ones that brought me MobileMe.” According to an Apple KnowledgeBase article, current MobileMe subscribers can use the services until 30 June 2012. The extension has already been reflected if you look at your account details at me.com.

Existing me.com and mac.com email addresses will be retained, and Family Pack subscribers can continue to create new family member accounts. However, it’s no longer possible to create a new 60-day trial account or update an individual account to a Family Pack account. If you’ve purchased a boxed version of MobileMe but have not entered the registration code, you can get a refund from Apple.

What’s not yet clear is the fate of MobileMe services that don’t directly fall under iCloud’s shadow, such as Back to My Mac and Personal Domain. Apple’s current information simply states, “When iCloud becomes available this fall, more details and instructions will be provided on how to make the move.”

Cumulo Mactus — We’ve long said that synchronization is hard to do well — just look at the troubled history of iSync and MobileMe, with their often-funky syncing results — but we have high hopes for iCloud. Clearly, Apple believes it has finally figured syncing out, and the company is betting big that iCloud can tie all of its devices together into a seamless, Apple-worthy experience for customers.

Comments About iCloud Rolls In, Extended Forecast Calls for Disruption