Those who went to the home page of the U.S. iTunes Store on the Mac last week and were paying close attention were rewarded with the first glimpse of Apple’s new wing — the iBookstore. That’s right, you can finally browse all the titles in the iBookstore from a Mac or PC in iTunes, rather than solely from within iBooks on an iOS device. (We’re not yet certain what the international availability of the iBookstore will be, and it’s likely that Apple will be rolling it out separately in different countries, with different collections of titles.)

This move has been far too long in the coming, and it has been painfully obvious that it was necessary. There’s absolutely nothing wrong with being able to buy books from within iBooks, much as books can be purchased from a Kindle, but it made no sense to prevent people from buying from within iTunes on a Mac or PC as well, especially considering that Apple has trained us to use iTunes for so many types of purchases. Amazon would never reveal the ratio (and I doubt Apple ever will either), but I would bet that most Kindle
books are purchased via the company’s Web site and only later downloaded to a Kindle device or app. That has undoubtedly played a role in Kindle books outselling print books at Amazon.

If you’re at all familiar with the iTunes Store, the iBookstore merges in seamlessly. There’s a top-level button for Books, with a drop-down menu if you click the little triangle that appears next to it when you mouse over the word. The menu lists all the promotions and categories, and choosing one displays just books in that category. There are also collections like New & Notable and Bestsellers (and it’s nice to see some of our Take Control titles, along with other books by our authors, appearing in the Bestsellers list). 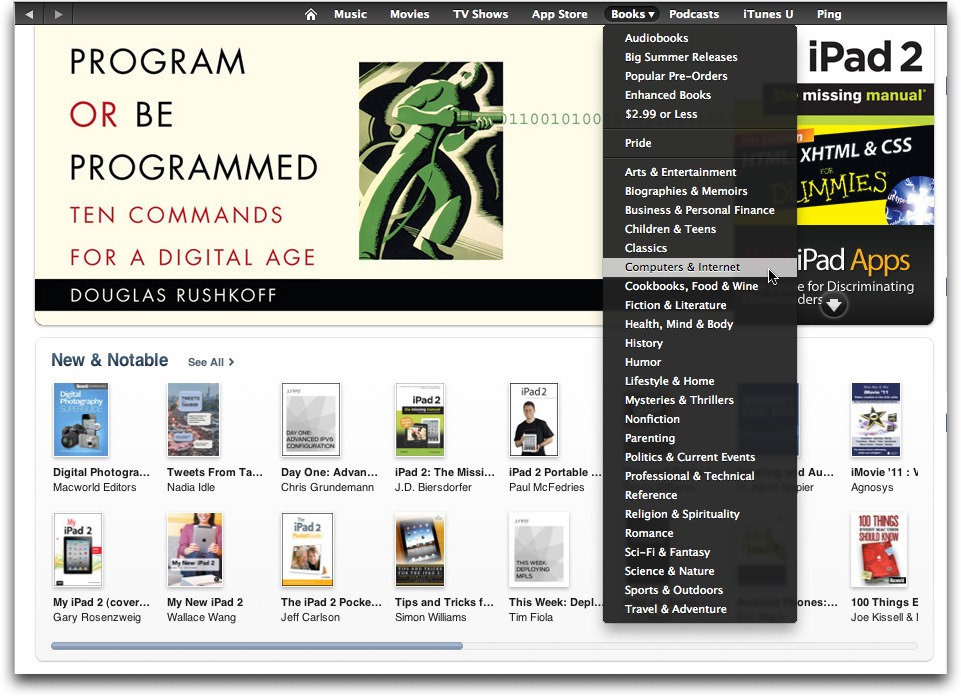 Books appear as a category in search results, but, unfortunately, iTunes truncates long titles, much as iBooks does. This is terrible for series-based titles like Take Control, although the series that suffers even more is “The Complete Idiot’s Guide,” whose titles are truncated beyond all utility. Readable cover thumbnails are tremendously important for working around the iBookstore’s discrimination against long titles.

Purchasing works just as you’d expect, with downloaded books placed in the Books category in iTunes for later syncing to your iOS device. It’s worth noting that, on your next purchase from iTunes, you’re required to agree to changes in Apple’s terms and conditions. The three important changes are:

Concerns about the search results and the lack of a Mac-compatible EPUB reader from Apple aside, we’re extremely pleased to see Apple bringing the iBookstore to iTunes, and we are curious if it will impact our sales at all. We prefer that our existing customers purchase directly from us because we earn more from those sales, and because our system automatically creates Take Control accounts for customers and adds purchased books to them, whereas account creation and title management is a manual process for those who purchase from the iBookstore. But at the same time, we’d very much appreciate it if new customers were able to discover our work through the iBookstore, and that should happen more now that people can browse the
iBookstore through iTunes.