With the announcement of music-related iCloud features in this week’s WWDC keynote (see “iCloud Rolls In, Extended Forecast Calls for Disruption,” 6 June 2011), Apple released a new version of iTunes to give users an early taste of the cloud. iTunes 10.3, available via Software Update or from Apple’s Download iTunes Now page, brings two major changes to the program. (10.3 also came with some new bugs, since Apple quickly released iTunes 10.3.1 a few days later; that’s the current version as of this writing.)

Both of these iCloud-related changes affect content purchased from the iTunes Store. The first is Automatic Downloads, which enables you to set up any copy of iTunes — and your iOS devices — to automatically grab copies of content you purchase in the iTunes Store on other computers or devices. In the Store pane of the iTunes Preferences window, you’ll see an Automatic Downloads section with three checkboxes for content that you can choose to download automatically when purchased on another computer or device linked to your iTunes Store account: Music, Apps and Books. Checking any of these will tell iTunes to download copies of files you purchase — or download for free — automatically, no matter what device you’re using, as
long as you’re using the same Apple ID. 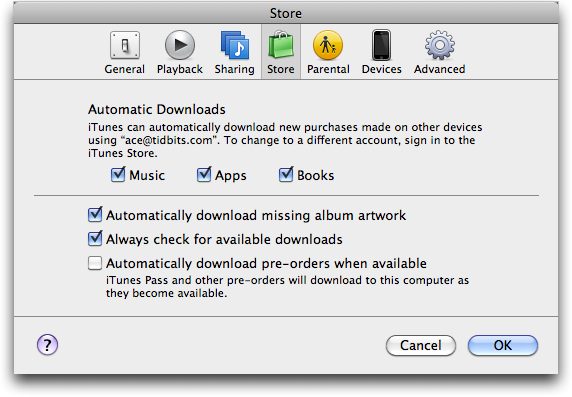 You’ll find similar options on your iOS device in Settings > Store, along with an option on 3G-capable devices to use cellular data if Wi-Fi isn’t available. 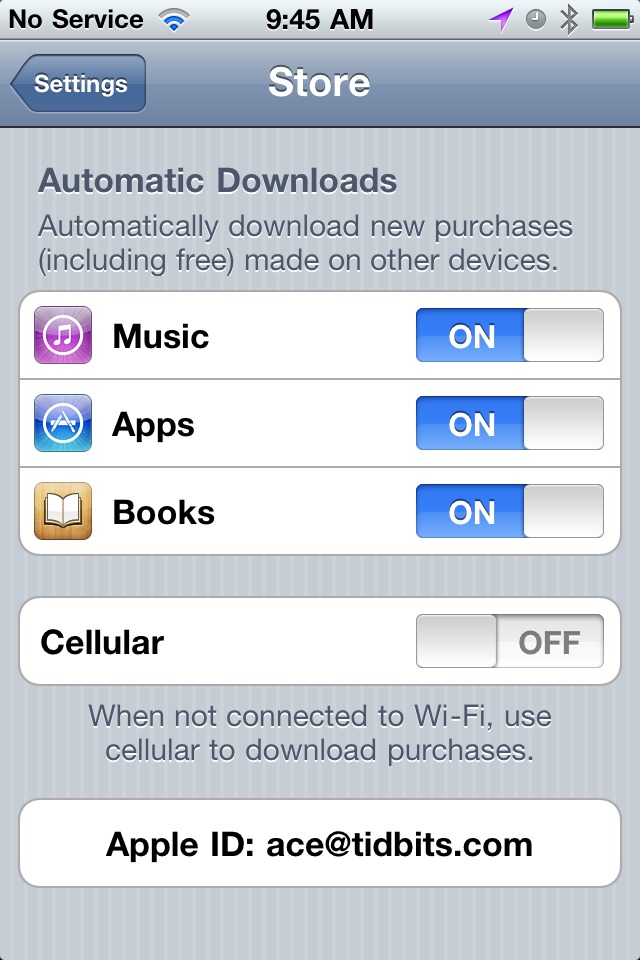 Automatic Downloads works, but not yet entirely consistently. When I downloaded a free song from iTunes on my iMac, the download also started immediately on my MacBook Air, where I had turned on the feature. At the same time, notifications rang out on my iPad and iPod touch telling me that I had just downloaded a song, and that I could turn on automatic downloads to have it sync automatically to these devices in the future. When I turned on Automatic Downloads on those devices, downloading a free song on the Mac
didn’t result in it being copied to them. Plus, Adam Engst never received notifications on either of his devices, including one that had Automatic Downloads turned on, and one that had it turned off, but the downloads all worked as expected after he turned the feature on everywhere. You may also be prompted to enter your iTunes password, if you haven’t authenticated recently enough.

The second change is the capability to see a purchase history in iTunes and re-download content that you have purchased, or downloaded for free, from the iTunes Store. (About time!) Go to the main page of the iTunes Store, and, in the Quick Links section on the right, click Purchased. iTunes loads a page where you can see all the music, apps and books you have downloaded. You can scroll through the lists, select an item, and click the cloud icon to download it, if it’s not currently in your iTunes library. If it is in your library already, iTunes displays a Downloaded icon instead. 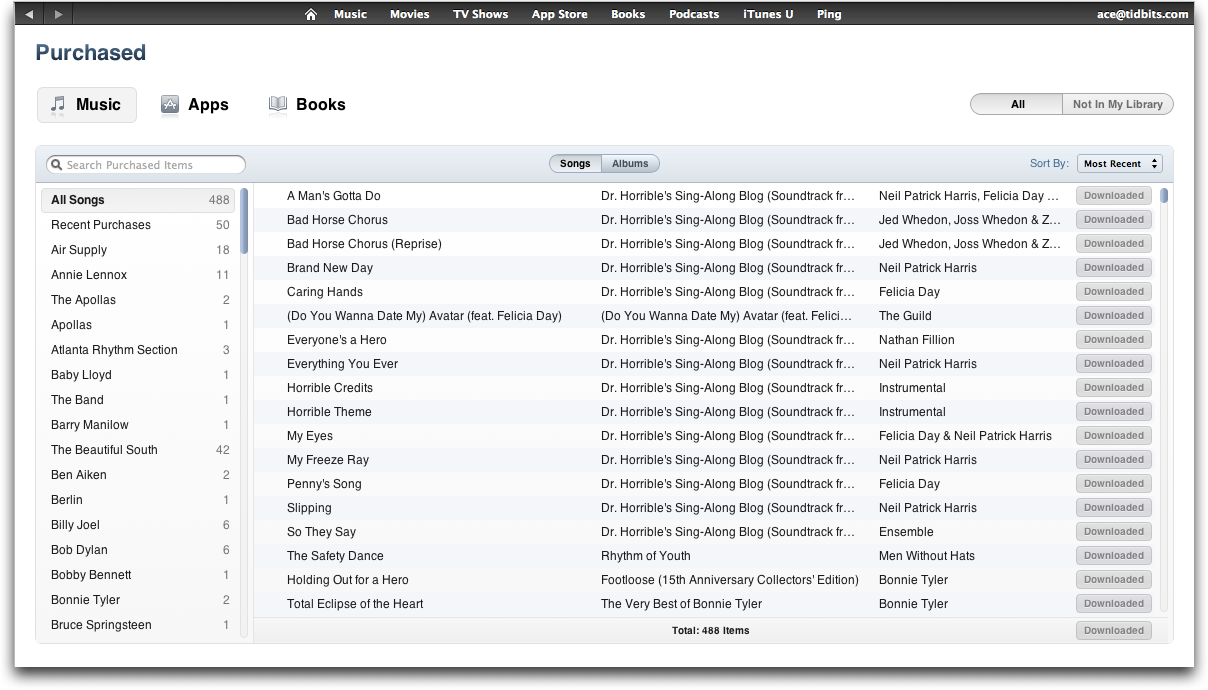 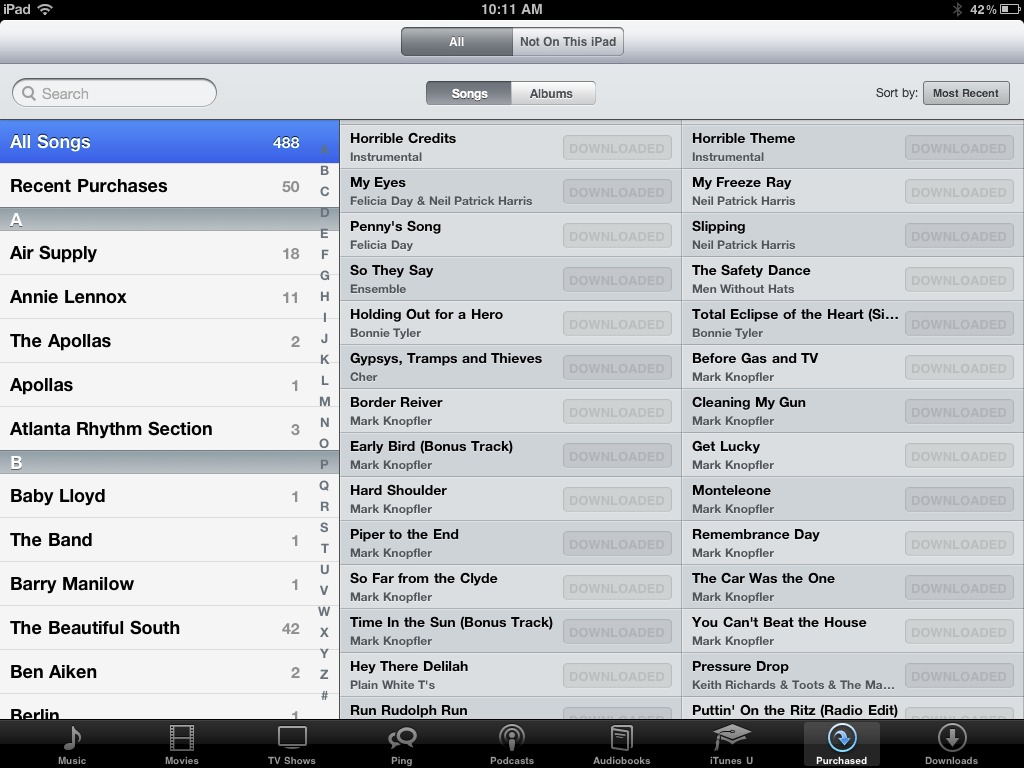 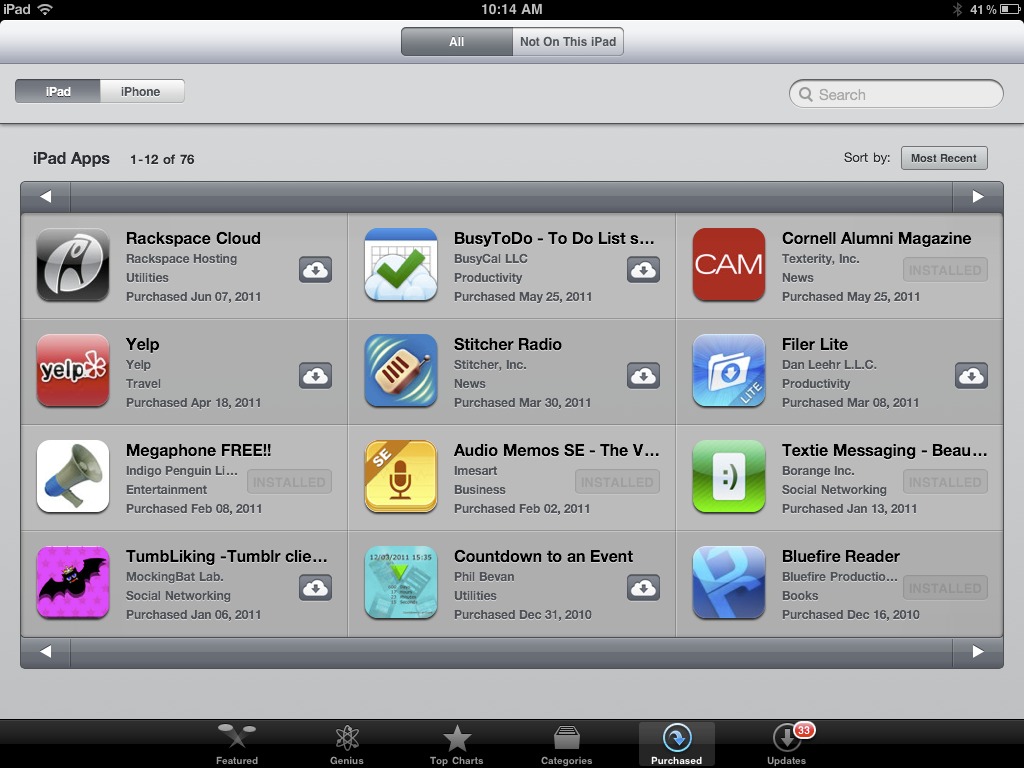 There are some qualifications to this feature, however. First, if you’re outside the United States, you’re out of luck, at least for music. Apple hasn’t made deals with record labels around the world yet, so if you don’t have a U.S. iTunes Store account, you’ll see only apps and
books.

Second, as Apple points out in a footnote describing this service, “Previous purchases may be unavailable if they are no longer in the iTunes Store.” In my case, I found that a fair amount of my purchased music is no longer available. For example, the “Complete U2” that I purchased in 2005 is now missing.

Interestingly, my purchase history lists, under U2, “A Celebration,” which seems to be a best-of collection of U2 songs, but when I click on it, I see an EP entitled “Three.” The “Bob Dylan — The Collection” complete set I bought in 2006 shows up as “Dylan,” and a large number of songs show as not being in my iTunes library, even though they are. And Vagn Holbmoe’s “Four Symphonic Metamorphoses” shows as having only three tracks available (of nine on the album), and when I click the link to View Full Album, an iTunes dialog tells me that the music is not available in the U.S. iTunes Store.

For most of the music in my purchase history, this new feature works well, but since I have purchased a fair amount of classical music from the iTunes Store, the artist list is confusing. Many albums are listed several times, once under each individual artist name. But there is a search field where you can type names of composers, songs, or albums to find music quickly. You can also click the Not in My Library button to see content that iTunes thinks is not currently in your library. In my case, however, it found 170 tracks by Bob Dylan, which are all in my library, as I mentioned above.

For apps, this feature seems to work better. It found — much to my surprise — 471 apps that I had purchased. I share my account with my son, and most of the apps listed are his downloads, and many of them are free. But with a list this long, it would be nice to be able to cull some of the free apps that we tried out and deleted, and remove them from the list. You can choose to see apps for the iPhone (and iPod touch) or the iPad, to make the list a bit easier to peruse.

Finally, you can re-download books, and, here, again, I found a number of purchases that are not listed, both for free books I downloaded, and for books I purchased. For example, I bought the seven volumes of Stephen King’s Dark Tower series to read on my iPad a couple of years ago, and only three of them show up in my purchased list.

While this feature should work perfectly — Apple has your purchase history — it’s likely that you’ll find some missing content as I have. In short, don’t depend being able to re-download content like this, and always back up your purchases. Apple claims, on the iCloud Features page, that these new features are only in beta, so perhaps there are just some glitches in the implementation.

One final new feature saw the light this week. It is not specific to iTunes 10.3, but is instead part of the iTunes Store, which can change on the fly, being little more than a fancy Web page. Now you can purchase books from the iBookstore — including some Take Control ebooks, such as my “Take Control of iTunes 10: The FAQ” — from within iTunes on the Mac, but you still cannot read them on your Mac. For more details, see Adam’s “iBookstore Finally Appears in iTunes,” 7 June 2011.

So iTunes 10.3 brings a few interesting new features for those who download content from the iTunes Store, which, let’s face it, is pretty much everyone these days. In particular, Automatic Downloads is nice for those who have multiple computers and iOS devices, and especially nice if you share an account with someone, and want to find out what they’ve downloaded so you can try out their new music, apps, and books as well.

[Kirk McElhearn is a Senior Contributor to Macworld and an occasional contributor to TidBITS, and he writes about more than just Macs on his blog Kirkville. Kirk’s latest book is “Take Control of Scrivener 2.” Follow him on Twitter at @mcelhearn.]

Comments About iTunes 10.3 Offers Automatic Downloads and Access to Purchases