It has been a long time since I slept like a baby (neither waking at 3 AM, crying and needing to be changed, nor slumbering peacefully and soundly), so when I had a chance to try out the Sleeptracker Elite sleep phase monitor alarm watch, I was intrigued. The device promised to help me monitor and improve both my sleeping habits and the quality of my sleep. That various versions of the watch have been in production since at least 2005 I found reassuring: in trying it out, I wasn’t about to subject my precious sleeping hours to some untested new technology. In fact, Andrew Laurence first wrote about Sleeptracker in TidBITS nearly six years ago in “Sleeptracker: How Dick Tracy Goes to Sleep” (11 July 2005).

Core Idea — The Sleeptracker is a wristwatch that watches you sleep. It contains accelerometers that monitor your movements during your slumbers and records the periods when you are the most restless (the manual that comes with the watch calls these periods the “lighter stages of sleep”).

Every morning when you wake (or any time during the day, really) you can use the watch’s buttons and display to review the previous night’s record of light sleep periods and see how you slept. More useful, though, is its capability for building a long-term profile of your sleeping patterns: You can transfer the Sleeptracker’s sleep pattern data to your Mac with the product’s downloadable Mac software and the included USB connector clamp and cable (more about the cable and the software below) and maintain a long-term annotated record of your experiences in the embrace of Morpheus.

The Sleeptracker’s alarm clock feature leverages the watch’s accelerometers to decide when to wake you: Rather than wake you exactly at your specified time, the Sleeptracker employs an alarm window (20 minutes by default, though this is adjustable) and triggers its alarm (audible, vibration, or both) at the lightest detected sleep phase within that window. Supposedly, being wakened when you are already almost awake makes you less groggy and more ready to meet the challenges of the day.

Sleeping with the Technology — The watch that I received was the men’s model Sleeptracker Elite, a large, rather clunky watch with an integrated rubberized buckle-type strap. It looks like something you’d wear when exercising, not sleeping. 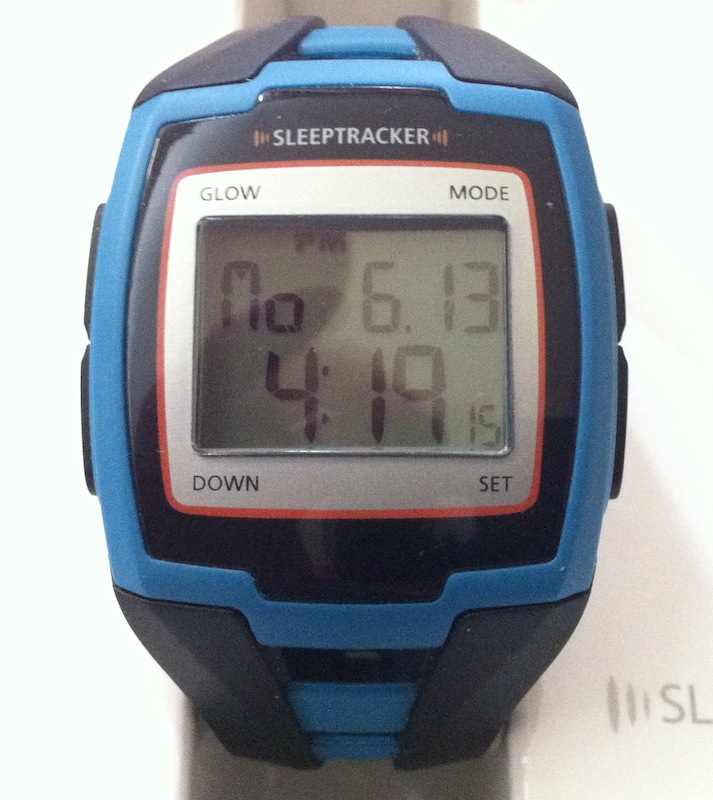 The manual is reasonably clear in its explanations of how to set the watch via the four buttons on its sides. However, although the manual does tell you how to shut off the watch’s alarm, it doesn’t conspicuously call out this important bit of information, so the first morning I spent a few minutes sleepily stabbing at buttons to shut the thing off while paging blearily through the manual to find the correct button to press.

The watch’s display itself uses large, clear characters and would be readable by someone with mild farsightedness; given that you probably don’t wear reading glasses when you sleep (I certainly don’t), the big display is a plus when you wake up at night and want to check the watch.

And wake up I did — quite a lot — the first night I wore the Sleeptracker. I experienced a sort of somnolent stage fright: I found it hard to fall asleep and stay asleep while wearing the lumpy metal and plastic device and, when I wasn’t wakeful, I was dreaming about wearing it. The next few nights, however, I slept better.

As far as recording my wakeful periods goes, the watch seemed to do it properly each of the four nights I wore it. I found that viewing my sleep record right on the watch each morning was easy enough to do with the watch button interface, and the averaged deep-sleep summary at the end of the night’s record was instructive.

However, on two of the four mornings the alarm failed to trigger at all. In one case, I almost missed a morning appointment because of it. The two days when the alarm did go off (within the window, as advertised), I wasn’t noticeably aware of being more or less groggy than usual.

I had planned to try using the Sleeptracker for at least a week, but I cut my experiments short when I began to develop a slight rash where the watch’s back touched my skin. Since I don’t normally sleep while wearing plastic and metal objects, I don’t know whether I am abnormally sensitive to the materials that compose this particular watch and strap, or if any watch might produce the same effect on me.

Using the Software and Cable — Sleeptracker has had a Windows version of its sleep database software for a while, but has only just introduced the Mac version. No software for either platform is included in the package, but either is a quick download from the company’s support page.

The Mac version of the software is minimalist. It does let you record, either manually or via import, your daily sleep records, and you can make notes about each night’s sleep. You can also include “sleep factor” information: sleep factors come in the form of questions, such as “Did you play video games within 1 hour of going to bed last night?” However, though daily answers to the sleep factor questions can be associated with each sleep record, the program provides no analytical tools for using them. You can easily export your sleep records, too, as CSV (comma-separated-value) text files, which you can readily import into Numbers or Excel. 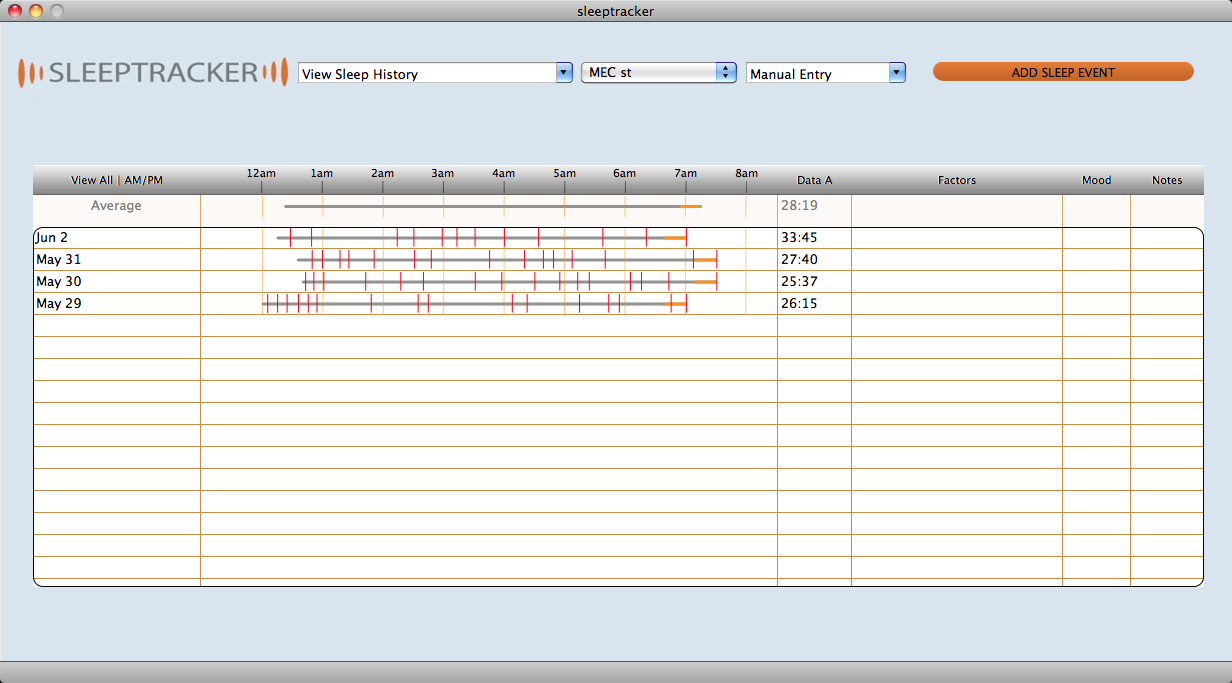 The most frustrating part of the software experience is when you attempt to transfer your latest sleep record information from the watch to the Mac. The watch has no mini-USB port on it; instead, it has a row of three contacts on its back. You use them with the provided USB cable. 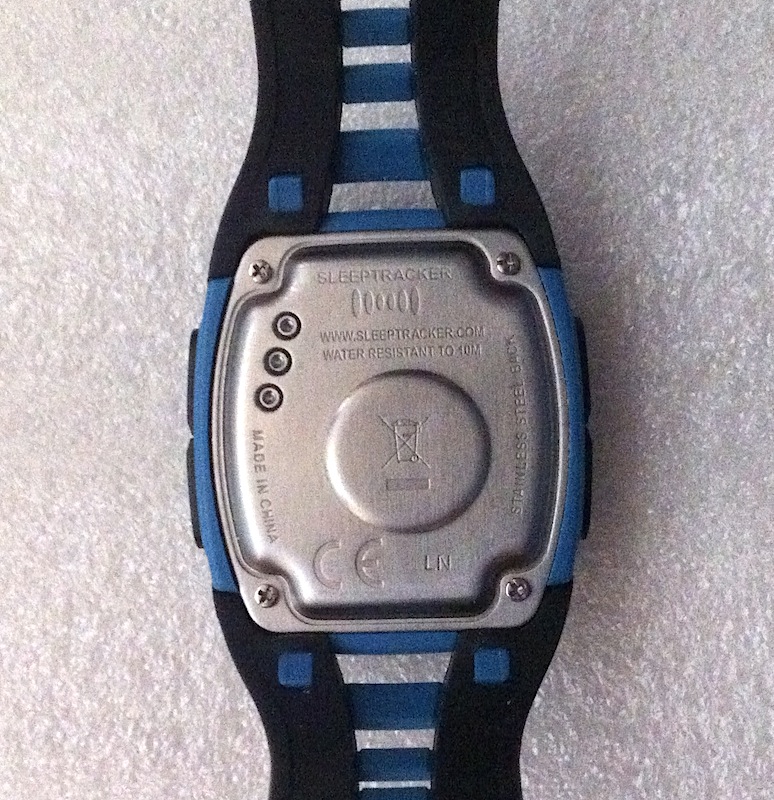 The USB cable has a normal USB plug on one end, and an alligator clip with three teeth on the other. These teeth are designed to line up with the metal contacts on the back of the watch when you clamp the clip to the watch. However, lining them up is tricky and takes a little practice. 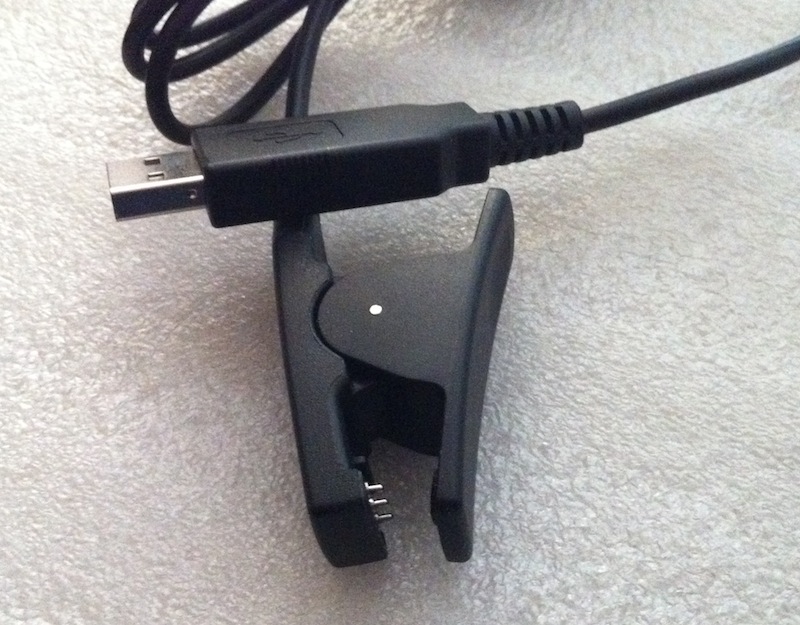 That wouldn’t be a huge problem, except that the software looks for a watch-USB connection only when it launches. Therefore, to offload the data you have to clamp the watch, then launch the software. If you haven’t lined up the pins properly, you must quit the software, retry the clamping, and then relaunch. This is not something you want to go through before your first cup of coffee.

I experienced one other minor glitch with the software: It consistently labeled each day’s record with a date that was off by one, so that, for example, my sleep record for the night of May 31-June 1 was labeled as June 2.

Conclusions — The Sleeptracker strikes me as a good idea indifferently executed. A slimmer, lighter, more comfortable watch would be a good start on improving the experience. So would better, more forgiving software. Most importantly, a much better method of offloading the watch’s data is needed: the alligator clamp cable is really a clunky kludge, and not what one expects from a watch that costs $179.

Much as I wanted to like the Sleeptracker, it seems that I’ll have to find a different set of needles to knit my ravel’d sleeve of care.

Comments About Sleeptracker: Sleeping with the Night Watch