On June 16, 1904, a young James Joyce went on his first date with Nora Barnacle, the woman who would eventually become his wife. Years later, Joyce set the action of his novel “Ulysses” on that date, and the day eventually became known as “Bloomsday” (named after the main character of the book, Leopold Bloom) to Joyce scholars and fans.

Eighty-six years later, on Bloomsday 1990, the Voyager Company, a small video and digital media company housed in a condemned building just north of Santa Monica Pier on Pacific Coast Highway, held a private meeting to which various scholars and academics were invited. Voyager had recently received a great deal of attention for developing one of the first commercial CD-ROM publications, a CD audio recording of Beethoven’s Symphony #9 and an accompanying HyperCard stack on floppy disk that synchronized the performance with a detailed and lively discussion of the work by UCLA professor Robert Winter. Now Bob Stein, the president of the
Voyager Company, wondered if it was possible to do for classic literature what Winter’s “CD Companion” had done for classical music.

Among those invited to the meeting was Professor Richard Lanham of UCLA’s English Department. A specialist in rhetoric, Lanham had become interested both in computer-assisted writing instruction and in the new kinds of expressivity that digital technology promised to create. I was a former student of Dick’s, and had helped him create some rudimentary interactive writing software. At the last minute, he asked me if I wanted to tag along to the meeting.

I remember that meeting only dimly, but I do recall that it was a wide-ranging, sometimes heated, discussion about whether or not anyone would ever want to read from a computer screen instead of from a printed page. The consensus finally reached was that the only way a computer-based reading experience would be even remotely attractive would be if the software compensated for the inconvenience and limitations of the then-current computer and display technologies by providing a lot of “extras” — deep and plentiful annotations, search capabilities, linked ancillary materials, animated illustrations, and so on.

(Coincidentally, at the same time that Voyager held its Bloomsday digital book meeting, halfway around the world, Tim Berners-Lee was busy crafting software that a year later would debut as HTML 1.0 and lead to the creation of something called the “World Wide Web” — chances are, you’re reading this on a screen using software that is a descendent of Berners-Lee’s invention.)

At the end of the meeting, Bob Stein pulled me aside and asked, jokingly (I thought), if I was interested in working for Voyager. He wasn’t joking: a few months later, I found myself working part-time at UCLA and part-time at Voyager, and, a few months after that, full-time at Voyager. My ostensible Voyager assignment: to come up with ideas and concepts that would lead to the creation of a CD-ROM-based interactive edition of Shakespeare’s “Macbeth.” I say “ostensible” because, in fact, I had to table that assignment almost immediately in order to participate in a different digital book project. (“Macbeth” was not tabled forever, though: the CD-ROM was
released a few years later.)

What changed? Between the Bloomsday 1990 meeting and the time I began working at Voyager, Apple had begun to develop its first PowerBooks. Unlike today, back then Apple often seeded promising developers with prototypes of new hardware. Voyager was seeded with an early PowerBook 100, and figurative light-bulbs went off over the heads of various Voyager employees. Here was a machine that could possibly be used as a digital book reader: it had a clear, readable screen (640 by 400 pixels, much more spacious than the more common 512 by 342 compact Macintosh screens of that era), it didn’t tether the user to a wall-socket for power, and was lightweight enough to be carried around
rather like one would carry a book — albeit a large, fragile, and expensive book.

Bob Stein marshaled as many Voyager resources as possible, including me, for this new book project. Using HyperCard, Voyager’s programming platform of choice, we developed prototype after prototype of something that we would eventually come to call (after much vociferous debate) Expanded Books. Everything was up for discussion: would an Expanded Book have pages? If so, how would they turn? Would there be page numbers? Would there be any way to write notes? Share notes? What reading tools would be provided? Everyone who happened by was invited to participate: programmers, producers, graphic artists, even the bookkeeper and receptionist. Eventually, we came up with the set of features that we thought a basic Expanded Book should have
(though even those were subject to change until just hours before we released our first ones). 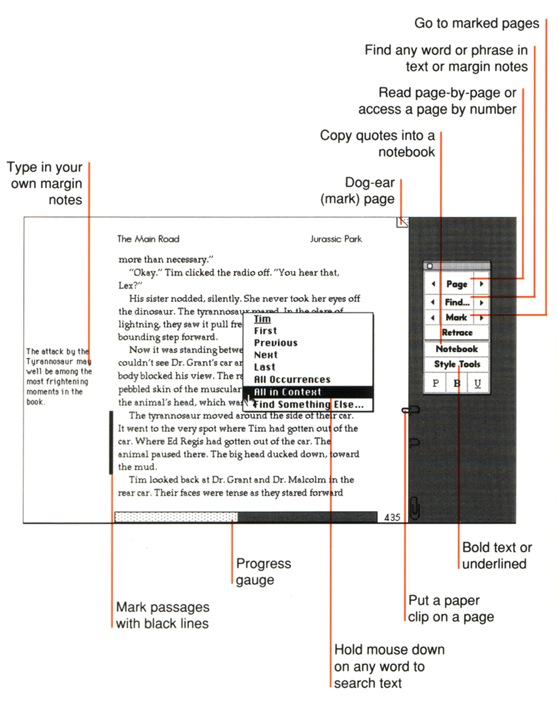 As the prototypes became more polished and consistent, we also debated what we would publish, and eventually decided upon three titles. One would be a simple, purely textual novel: Douglas Adams’s “Complete Hitchhiker’s Guide to the Galaxy”. 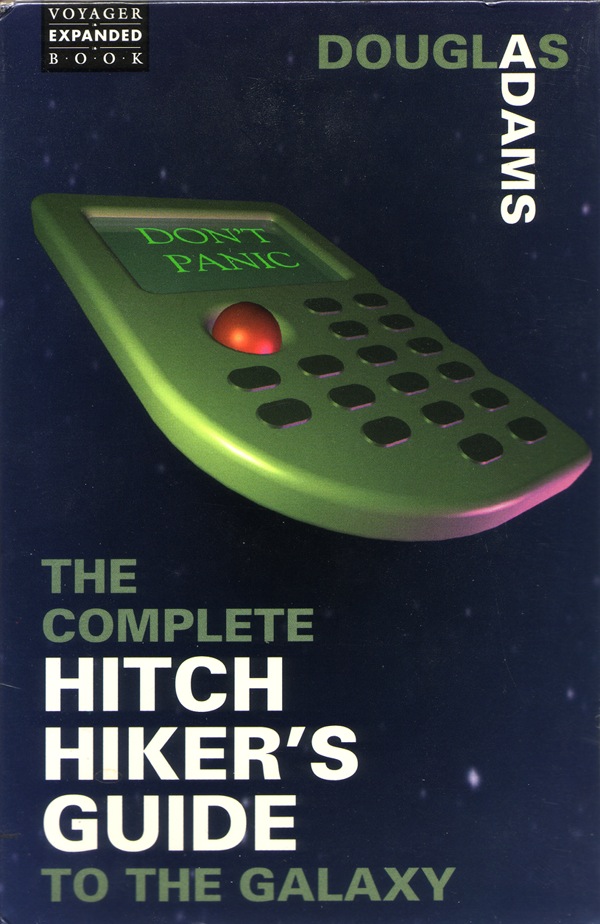 One would be a popular novel to which we could add certain special features. We chose Michael Crichton’s newly published “Jurassic Park” for that, and the special features would include illustrations of dinosaurs, sound effects based upon the dinosaur calls Crichton described in the text, and animated fractal chapter openers taken from the fractal graphics that were printed in the hardcover edition.

The final book was a genuine literary classic, full of footnotes and all sorts of opportunities for special features: a book that combined Martin Gardner’s two editions of Lewis Carroll’s “Alice” books, “Annotated Alice” and “More Annotated Alice,” into one digital volume.

Even as we worked on refining the feature set of the Expanded Books, my job was to painstakingly copy the text of each of these books into a HyperCard stack, a process we called “flowing the text.” This included hand-adjusting the spacing between words, adding in clickable notes (an epic endeavor in the case of Martin’s books), and even producing some of the special effects. I remember spending a day or two writing the HyperCard scripts that would make John Tenniel’s Cheshire Cat illustration in “Through the Looking Glass” dissolve in and out
on the digital page and another day recording dinosaur sounds with an audio engineer (the tyrannosaurus in “Jurassic Park” was a lion’s roar mixed with an industrial vacuum cleaner).

In January, 1992, the first three Expanded Books were introduced at Macworld Expo in San Francisco. Each book was packaged in a slim, shrink-wrapped, custom-designed stiff-paper folder, with pockets containing a feature guide, installation instructions, and a floppy disk on which the HyperCard stacks and fonts that made up the digital books resided (interestingly, the standard font we chose for the Expanded Books was a version of Palatino, which today is the default font used for Apple’s iBooks app). The Expanded Books met with great success and even won a coveted MacUser’s Editors’ Choice Award (for Best Information Product) at the Expo.

Voyager went on to strike publishing deals with a number of authors over the next several years, and produced dozens of Expanded Books, including selected books from the acclaimed Random House Modern Library series. It also produced an Expanded Book Toolkit so people could build their own Expanded Books. My work on the Expanded Books led me to rethink completely the tabled “Macbeth” project, and that project eventually became what we thought at the time would be an example of the next stage of the Expanded Book.

Unfortunately, a combination of partnership disagreements and the rise of the World Wide Web, with its concomitant devastation of the “New Media” CD-ROM market, led to the eventual break-up of the Voyager Company and the demise of the Expanded Books project. However, two decades after the project’s inception, and over a century after James Joyce’s momentous date with Nora Barnacle, the ebook has become an overnight sensation. Although the Expanded Books are now only a footnote in ebook history, many of the interface ideas that we developed are still in use — Bob Stein never considered patenting any part of the Expanded Books interface: he wanted to publish books, not platforms, and felt that digital books would succeed only if
there was a basic set of features that every publisher could freely adopt and use.

So the next time you dog-ear a digital page’s corner, or drag a page indicator at the bottom of an ebook page, think of James, and Nora, and the crazy people in the condemned building on the beach in Santa Monica, all of whom, in their own ways, helped make the miracle of modern ebooks possible.

Comments About Nora Barnacle and the Birth of the Ebook