When iMovie for iOS 1.2 was announced earlier this year, I was told by an Apple representative that iMovie ’11 would be able to import movies created in iMovie for iOS, the app that runs on the iPad, iPhone, or iPod touch. However, that information turned out to be incorrect: GarageBand was able to import projects created in GarageBand for iOS, but the same was not true of iMovie. (See “New iOS Versions of iMovie and GarageBand,” 2 March 2011.)

It turns out the Apple rep wasn’t wrong, just premature. Today’s release of iMovie 9.0.4 brings the capability to import projects created in the iOS app into the Mac app. That means you can start a project on your iOS device (when the video or your ideas are still fresh, or you just need to kill some time) and bring it into iMovie ’11 for finishing.

In a quick test, I assembled a movie on my iPad 2 and then imported it into iMovie ’11. All the elements in my movie (including background music, sound effects, Ken Burns Effect settings, and themes) came across fine. In fact, iMovie ’11 recognizes that my project used the Neon theme, which is available only in the iOS version, and includes other theme elements not used in the project, such as alternate title styles. Changing the project’s theme to one of the iMovie ’11 themes removes the capability to go back to the iOS theme, however. 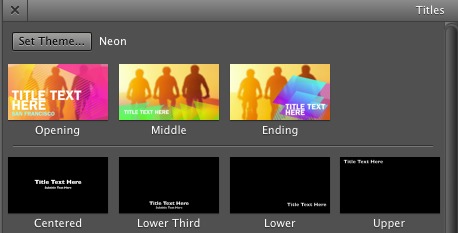 Unfortunately, the process of getting a project out of iMovie for iOS and into iMovie ’11 is still as cumbersome as ever. (I’d love to see the capability to sync projects via iCloud the way we’ll be able to sync documents, but I’m guessing the large size of iMovie projects would make the feature difficult to work with.) The steps go like this, if you want a handy reference:

Alas, it’s not possible to make edits in iMovie ’11 and ship them back to iMovie for iOS for later editing on the road. Perhaps in a future update.

In addition to being able to import iMovie for iOS projects, iMovie 9.0.4 fixes issues where some audio adjustments didn’t stick, improves performance when working with large quantities of video clips with keywords and with large iPhoto libraries, and adds support for full screen mode in Lion.

The iMovie 9.0.4 update is a 76.2 MB download, available via Software Update, as a direct download, or as an update in the Mac App Store if you purchased the application there.