I’m generally pretty fortunate when upgrading to new versions of Mac OS X. While I often see people lamenting in forums how this or that feature doesn’t work, how a certain program is broken, or how they have hardware problems following an upgrade, that’s never happened to me. Until now.

I have a new 27-inch iMac, purchased in June 2011. It worked perfectly with Mac OS X 10.6 Snow Leopard, but when I upgraded to 10.7 Lion, I started having problems with the computer freezing when I viewed videos. This occurs with all kinds of videos: Flash, H.264, and QuickTime formats, as well as AVIs and MKVs. And we’re talking about a serious freeze: the entire screen freezes, except for the cursor. Music may continue playing if iTunes is running, but the only way to resolve the problem is to force a shutdown by pressing and holding the power button. Interestingly, these video-related problems occur only after the Mac has been put to sleep. If I restart the iMac, the freeze won’t happen until it’s put to sleep, then
awakened.

There is information in the kernel.log that strongly suggests that this is a problem with either the video card (GPU) or its drivers:

This problem seems to have hit thousands of Mac users, and while Apple is trying to find a solution, they haven’t yet, leading to an increasing level of ire among some of those affected. There is, as of this writing, a 50-page thread on the Apple Discussions forum lamenting this issue, and I’ve been chronicling it on my blog, where I also posted a screenshot of a Quick Look window showing the video problem just seconds before a freeze. 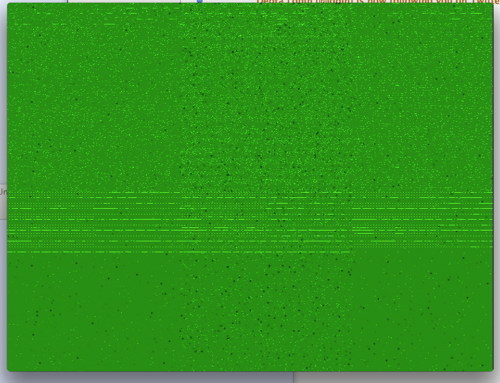 How It Began — I first noticed this problem shortly after the Lion GM (golden master) was released. I have a developer account, and had been running developer preview releases of Lion on my secondary Mac, a 2010 MacBook Air, with no major issues. When the GM was released to developers, I decided to install it on my iMac as well. I experienced several freezes early on, but since Lion was still not officially released, it wasn’t easy to find other users with the problem to know if it was common. I did find one, however, in fellow TidBITS and Take Control author Michael Cohen, who had also recently bought a new iMac. On the super-secret mailing list for Take Control
authors, he mentioned the problem, and I said that I was having it as well. A quick email conversation confirmed that it was exactly the same.

Trying to Fix the Problem — Even though I have a new iMac, and had already purchased AppleCare, I knew I couldn’t contact Apple about this; they would say that I was running pre-release software and there was nothing they could do. I avoided watching any videos, and, finally, on 23 July 2011, after Lion was released, called Apple Support.

I explained the problem, and got a very understanding support technician, who did not waste my time asking me to reset the PRAM and SMC (which I had already done), or reinstall Lion. I made it clear that there had been no problems with Snow Leopard, and it was unlikely that it was the iMac that was at cause. He took notes and said he’d get back to me.

A few days later, to my surprise, I got a call from a senior tech support engineer. My case had quickly been escalated, because the support staff clearly realized that this was a serious issue. I explained what had happened and what I had done to try and resolve it, and he offered several possible solutions. I deleted certain cache folders, and sent him some logs; he called back again, asking me to try disconnecting peripherals (check), removing third-party RAM (check), and, finally, to do a clean installation on a different disk (check). The problem still occurred, though it took me a while to reproduce it following the clean installation.

What’s Next? — As of now, there is no solution. I know Apple is working hard to find the cause, as I’ve been in regular contact with support engineers by email and telephone. While the sprawling Apple forum thread is difficult to navigate, and many people think they have found solutions (which turn out to be transitory), here’s the lowdown.

Viewing videos of any kind on new iMacs, both the 21.5-inch and 27-inch models, can cause freezes. This doesn’t happen every time one views a video, and happens only after an iMac has been put to sleep at least once. These videos can be Flash, H.264, or QuickTime formats, and viewing may occur in Safari, Firefox, QuickTime Player, iTunes or any other program.

The usual troubleshooting steps, such as resetting the PRAM and SMC, are ineffective. Similarly, a clean installation of Lion, with no third-party software installed, does not solve the problem. Deleting and/or reinstalling Flash and Java, both suggestions floated in the Apple forum, has no effect. Fiddling with RAM or other hardware makes no difference, though it may turn out that this is a hardware problem with video cards. (A specific video card bug seems unlikely, though, because many people with this problem, including myself, bought their iMacs with Snow Leopard, and did not have freezes until upgrading to Lion — the problem seems to be a conflict between the iMac’s video card and Lion.) In short, none of the “solutions”
offered on the Apple forums resolve the issue.

If you have this problem, there are only two ways to avoid it:

Also, please, if you have this problem, contact Apple Support, so they know how many people are affected. Tell them what you’ve read, here and on the Apple forums, and try not to waste your time if they ask you to do anything complicated that has been proven to be ineffective, such as reinstalling Lion.

I’d like to give Apple a bye on this problem, but it’s disappointing to think that in their testing of Lion, they didn’t spot it, particularly with the newest iMacs. I know that if they had found a solution, I would have heard from the support technicians I’ve been in contact with, and I’m hopeful that they find the cause soon and issue a fix.

Operating systems are complex, and the types of problems that can occur are many. At least, in cases like this, there are relatively few hardware variables, as there would be with Windows PCs; new iMacs have one of only three different video cards.

But a lot of iMac users — and, judging from the Apple forum thread, many of whom are new to Macs — are very angry that this is happening with brand new Macs. As for me, I take it as just another bump in the road. I don’t watch a lot of videos on my iMac, but if I needed to for my work, I would probably be somewhat less stoic.

Finally, if you have a new iMac that’s still running Snow Leopard, and you watch videos of any sort, I recommend holding off on a Lion upgrade until Apple addresses this conflict.

[Kirk McElhearn is a Senior Contributor to Macworld and an occasional contributor to TidBITS, and he writes about more than just Macs on his blog Kirkville. Kirk’s latest book is “Take Control of Scrivener 2.” Follow him on Twitter at @mcelhearn.]