We’re pleased to welcome as our latest long-term TidBITS sponsor a small company you may not have heard of before — Noteboom Productions. Founded by Dan Wassink, Noteboom produces video tutorials for Mac and iPad apps, sold exclusively through the Mac App Store and iOS App Store.

Dan Wassink, who has been reading TidBITS for years, told me that he came up with the idea for his video tutorials while working as an Apple Genius; he found himself answering the same questions, over and over again. The same thing happened when he was helping friends and family, as we’ve all done.

Dan’s teaching experience comes through in the videos I’ve watched — you really get the feeling that he’s sitting next to you, telling you about the software in question. The audio and video quality of the tutorials is high, but Dan very much comes off as a guy who’s interested in explaining things to you, rather than a slick professional working from a carefully crafted script. On the content side, Noteboom’s tutorials are aimed at beginners; they’re designed to get new users up and running, not to teach experienced users new tricks. Those I’ve watched have been extremely solid, presenting good advice clearly and carefully. That’s borne out in their App Store reviews, over 80 percent of which are 4 or 5 stars (and
most of those are 5 star reviews).

The user experience is good — each tutorial is a standalone Mac or iPad app, with a list of 20 to 30 topics in a left-hand sidebar and the rest of the window or screen devoted to the video. Each topic plays a 2 to 5 minute video, and while you certainly can move through them sequentially, nothing prevents you from jumping around as well. The iPad app is of course always full-screen; the Mac app can run in a window or be zoomed to full screen. 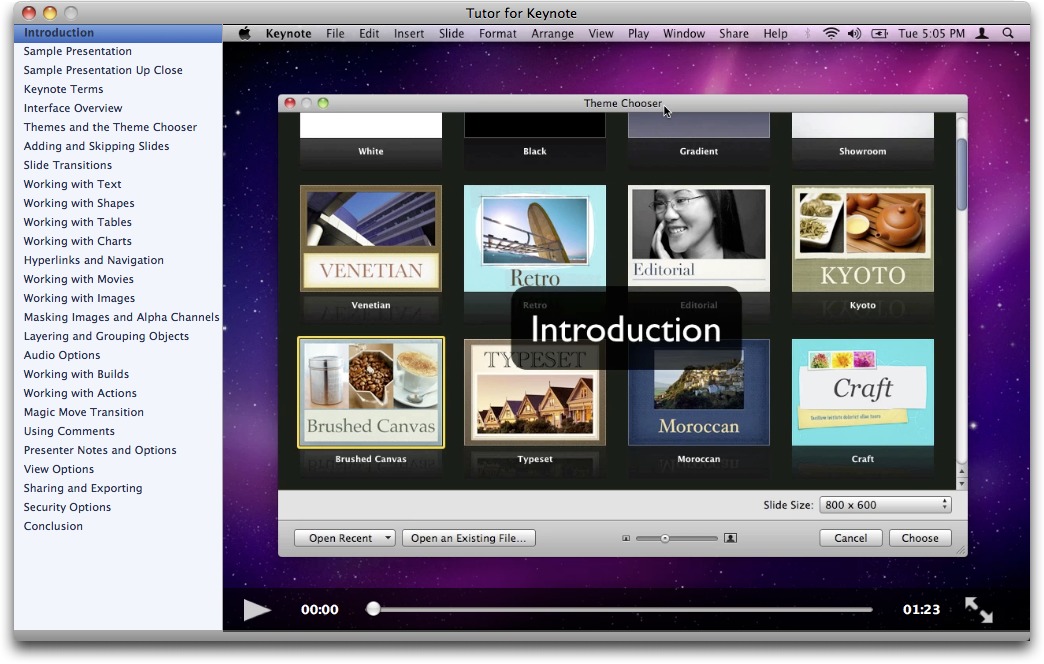 Overall, I was impressed by Noteboom’s “Tutor for” products, and Dan is hard at work adding more titles to the current collection, which covers common apps like Keynote, iPhoto, iMovie, iWeb, and Bento, with some general titles explaining Lion, Snow Leopard, and the iPad. If you’re looking to get started with an app that Noteboom covers, or you know someone who is, their video tutorials are well worth a look. That’s especially true given how inexpensive they are, with prices ranging from $1.99 to $4.99.

Thanks to Noteboom Productions for their support of TidBITS and the Apple community!