I bought a Fujitsu ScanSnap S1300 because I want to have less paper piling up in my house and more access to documents when I’m not at my desk, whether I’m in Staples working through the list of required school supplies for my 7th grader, being the secretary at a PTA meeting, or putting in work hours while traveling away from home.

The ScanSnap is addictive, and I’ve hardly begun to learn how to use it. Here’s how cool it is: My son comes home from the first day of school with a fistful of forms and handouts. I open the scanner, stick them in, choose an option from the ScanSnap icon in the Dock, and push the big blue button on the scanner. Within moments (or minutes if I chose to run OCR) the entire pile is onscreen, even the double-sided forms and the pages that emerge from the backpack slightly crumpled.

(OCR stands for “optical character recognition,” a fact that I mention here only because at least one smart person at my recent PTA meeting didn’t know it, so obviously it’s a geek term that’s not as widespread as I had thought. When you run OCR on something, you convert its scanned image into actual text that you can edit, copy and paste, and search.)

For forms that obviously need to be filled out again and again, I fill in the bits that won’t change and then print them as needed. These include medical permission forms that come home a half-dozen times each year, and the school district’s repeated requests for permission to put my son’s photo on the Web. Yes. It’s fine. But if you ask one more time, I’m gonna say no for variety’s sake.

(I haven’t yet worked up the courage to ask if I could, you know, return these forms via email. Our school district is big on “preparing students for the 21st century,” which is a buzzphrase for “helping them graduate with real-world technology skills,” so I think we adults could set an example here, since we’re already well into the 21st century.)

I then tag each file with a handful of tags using Tagit, a free utility from Ironic Software, to make it even easier to find them later, and then I stick the files in a shared Dropbox folder that my husband can access from any computer or from his iPhone or iPad. If a document seems like something my son might want, I stick a copy in his Dropbox folder. Some of these paper documents now land in the recycling box, but others go back to my son, who will likely crumple them up and store them in his backpack for the rest of the school year. 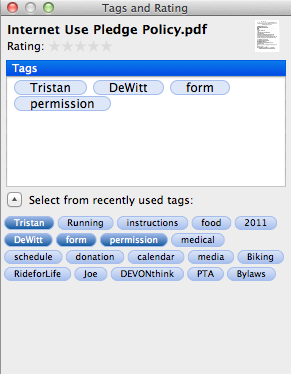 (Something that’s new this year is that my son may be allowed use a portable digital device in school, but only for a specific approved educational purpose, such as sharing a favorite song from his iPod touch during music class. It would be neat if he could load some of the documents into his iPod touch and generally carry it around — or even load them onto an iPad or one of the old Kindles kicking around the house, but the school hasn’t reached the point of generally allowing a piece of hardware to
replace a paper notebook. But, it feels funny turning papers into digital objects and then giving them back to my son to carry around in perpetuity in his backpack — like many students, my son is locker-adverse, because, apparently, you never know when a teacher will want you to produce a protractor or a purple pen.)

To do all the above with flair, it helps that I know how to use Smile’s PDFpen, which makes it easy to combine PDFs and to move individual pages out of PDFs. I chose the $295 ScanSnap S1300 because I read Joe Kissell’s “Take Control of Your Paperless Office,” and his descriptions of various scanners made me think that it would be a good choice for my modest needs and small desk. If I had a bigger desk, larger budget, and more papers to scan, the $495 ScanSnap S1500M would be a better choice, since
it appears more robust overall for handling a lot of paper. Also, the ScanSnap’s Amazon reviews are excellent, and the unit was available via Amazon Prime. (Disclaimer: I didn’t just read “Take Control of Your Paperless Office,” I edited it. Twice.)

You may be wondering why I chose Dropbox and the Finder as my filing repository for scanned documents. After all, there are many alternatives. You can put your scanned files into all sorts of software, including favorites like EagleFiler, Yojimbo, and DEVONthink (about which Joe Kissell has also written a book — “Take Control of Getting Started with DEVONthink 2”), and that list only skims the surface of the possibilities. In fact, you could spend months
evaluating the options and learning how to use your eventual choice. And, in a case like mine, you could spend even more time discussing options with your spouse and teaching your homework-laden 12-year-old how to use it. That’s just not happening. In our household, we all know how to use the Finder, we have modest needs, and the extra boost of tagging that I’m adding with Tagit should help us find stuff if the simple folder hierarchy that I’m using proves insufficient (another ebook that I edited recently, “Take Control of Spotlight for Finding Anything on Your Mac,” taught me how to type queries like the one in the screenshot below). If we find that we need a
more sophisticated tool, we can always switch later. 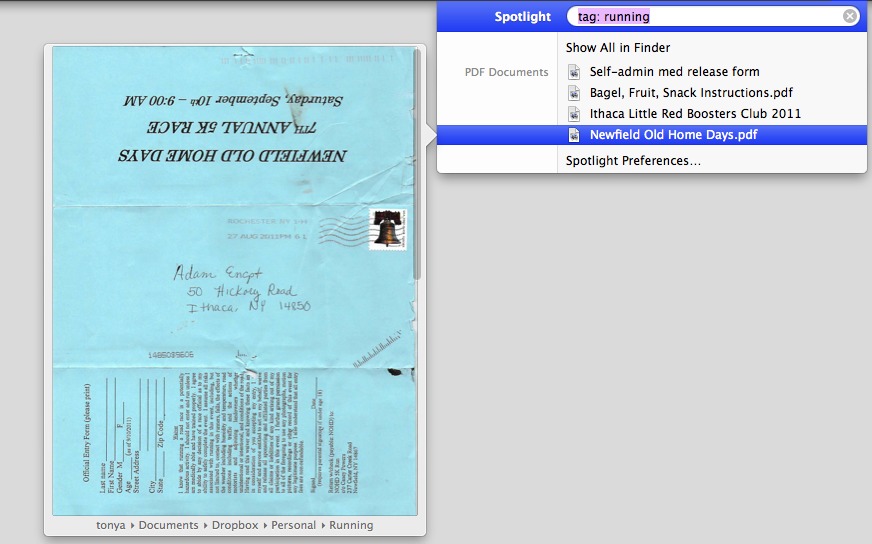 A downside of the Dropbox iOS app is that it doesn’t load all your files onto the device all the time, so the app can be slow to access a file over a cellular data network. Also, the iOS app can’t find a file based on the tags that I apply with Tagit. Two of the programs that I mentioned above, Yojimbo and DEVONthink, have mobile apps that can sync stored documents on a Mac to an iOS device, so it’s possible that we’ll want to move to one of those in the future; however, I worry that three people attempting to
share a single data repository will complicate matters. Also, Code 42 Software just announced a CrashPlan iOS app that offers remote access to files in CrashPlan Central backups, and although it currently won’t help us (since we back up to a friend’s computer, not to CrashPlan Central), it’s possible a future version will provide access to our backed-up data.

Meanwhile, the only thing that would be better than the ScanSnap is to not have to use it at all because the information was all online and presented in a lovely way. Maybe that’ll happen in the real world outside the technology industry by the 22nd century.