In a day and age where many companies seem to consider release notes a sign of weakness (“Improves stability and security”), it’s nice to sit down and read through the extensive release notes from a BBEdit release. Bare Bones Software just put out BBEdit 10.1, and true to form, the new version features well over 100 changes. It’s impossible to generalize, of course, but I expect most software releases have plenty of changes — the companies just don’t want to admit to many of them. But how else can you know if some confusion you’ve had in using a program was really just a bug that has now been fixed?

With BBEdit 10.1, Bare Bones has added a few welcome features to the already beefy upgrade of 10.0 (see “BBEdit 10 Improves UI, HTML Markup, and EPUB Editing,” 19 July 2011). Most notable is an enhancement to BBEdit projects — the File > Open File by Name command now displays a modeless window that lets you search for the names of files in the frontmost project or active Xcode project and then open the found documents. A search history is retained too. This feature is probably most useful for developers, but anyone who works with projects containing many files will appreciate it. One neat extra: you can drag the favicon of a Web page to the Open File by Name window’s text field to
open a copy of that document’s HTML source. 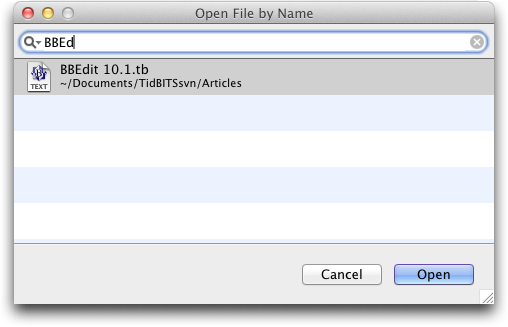 Also new are improvements to the Preview in BBEdit feature so you can now preview documents that aren’t in HTML or in a language like Markdown that’s designed to generate HTML. So if you preview a document containing code, it will be rendered nicely for display, which could be useful for publishing code listings. Plus, you can create a CSS file that will determine how a particular language should look when previewed.

Other minor new features include a Tile Two Front Windows command that appears in place of Window > Arrange when you hold down the Option key; an option in the Multi-File Search window to target searches to the frontmost project; and three new expert preferences to tweak HTML image tags, control the default language for new documents, and report on how long a Replace All operation took.

Speaking of Replace All, BBEdit 10.1 has improved the performance of single-file Replace All actions by four to five times, or even more on Macs with more than two cores. Other changes to existing features include the preservation of document widths when entering full-screen mode in Mac OS X 10.7 Lion (reverse this behavior by Command-clicking the full-screen button or by setting an expert preference), the elimination of full-screen as an option for FTP browser windows because it’s just silly, the removal of the unnecessary horizontal scroll bars in difference windows, and ergonomic improvements to the HTML markup panel.

Turning to the bugs fixed, if you’re a serious BBEdit user, I particularly recommend that you scan through the full release notes on the Bare Bones Web site to see if you might have been running afoul of anything that is now fixed.

Fixes range from stuff that no one should ever have seen (delays when working with projects that contained close to a million files) to things that might have been maddening to particular users (a problem with saving Zip archives that caused Adobe Digital Editions to “freak out”). Most amusing among the release notes this time is:

BBEdit 10.1 is a free update for all owners of BBEdit 10.0; it’s accessible via BBEdit > Check for Updates, via the App Store application for those who purchased via the Mac App Store, or directly from the Bare Bones Web site as a 13.7 MB download. New copies and upgrades cost $39.99 direct from Bare Bones or via the Mac App Store through 19 October 2011, after which the price for new copies will jump to $49.99.