Whenever a major new version of Apple software is released, the high-profile features get a lot of attention — but of course plenty of other changes are also worked into the update. Now that iOS 5 is out, we can focus our spotlight on stuff that we feel is cool, overlooked, or both.

iPad Split Keyboard — If you type with your thumbs while holding an iPad in both hands, or if you want to move the onscreen keyboard, check out the new Split Keyboard feature.

To begin parting this pixelated Red Sea, drag the Show/Hide button at the lower right of the keyboard up the screen. As you do, the keyboard splits into two sections, making the keys smaller but closer to the screen edges. Continue to drag the button to reposition the keyboard vertically on the screen.

However, you don’t need to use the Show/Hide button to make the split: Using your thumbs, drag outward from the middle of the keyboard. To put the keyboard together again, put a thumb on each section and push them together.

If you prefer the non-split keyboard, but want to move it onscreen, touch and hold the Show/Hide button to reveal a popover with commands to Undock or Split the keyboard. Tap Undock and then drag the keyboard up or down.

When the keyboard is split and repositioned, the popover changes to read Dock and Merge, dropping the joined keyboard to the bottom of the screen.

As before, tapping the Show/Hide button makes the keyboard disappear and takes you out of text-entry mode.

(If things don’t seem to be working, enable the split keyboard in Settings > General > Keyboard.)

Shortcuts — Much as we like Smile’s TextExpander touch and the apps in which it works, it’s not available everywhere in iOS, but the new Shortcuts feature is. While you’re in Settings > General > Keyboard, you can create shortcuts and expansions, making it easy, for instance, to type “eml” and have iOS 5 automatically expand to your email address. It’s not as full-featured as TextExpander touch — for example, long snippets don’t retain line breaks — but for short common phrases or frequently made typos, the text shortcuts help.

Calendar Week View on the iPhone — Here’s a long-awaited feature: On the iPhone, open the Calendar app and rotate the phone to its landscape orientation to reveal a scrolling week view. 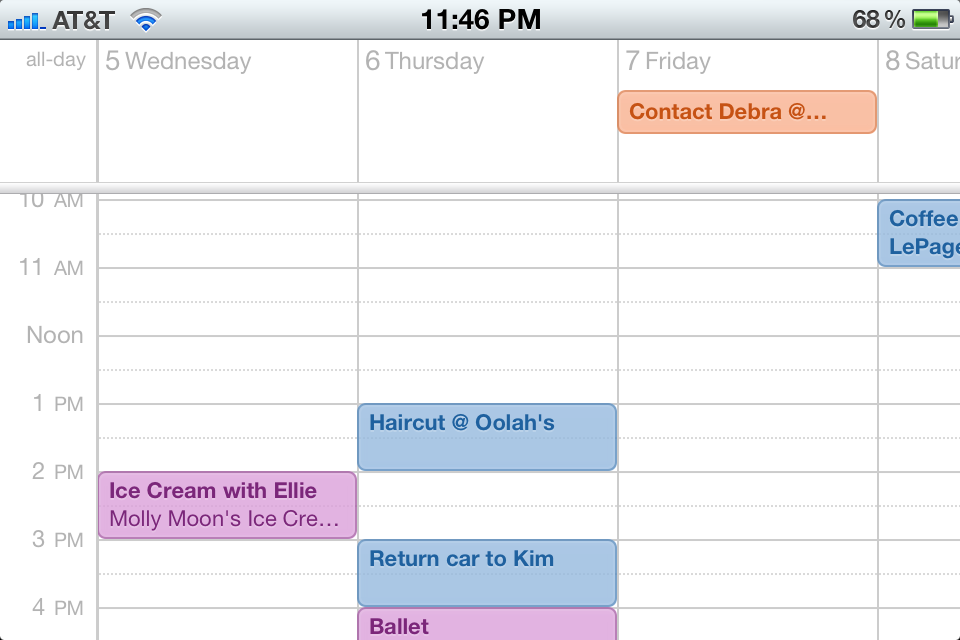 This is a more convenient way to move through events on such a small screen, and it’s a welcome addition.

A New iPad Mailboxes View — In Mail on the iPad, in portrait view, swipe left to right with two fingers to display the mailbox list, which slides as a panel from the side of the screen. 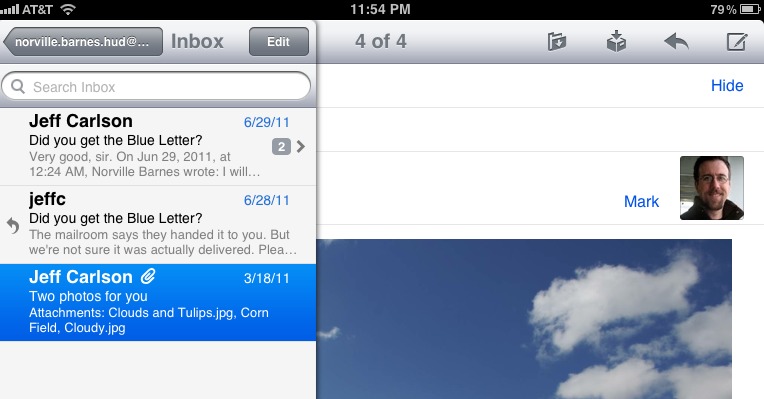 I don’t know why the list doesn’t appear as a popover, as it used to — perhaps Mail will become the iTunes of the iPad: the place where Apple experiments with interface.

Location-Based Reminders Missing on iPad — On an iPhone running iOS 5, you can create a task in the Reminders app that produces an alert based on location. For example, you can specify not only that you need to call someone, but the reminder alert will pop up when you reach your office. To do so, create a new reminder, tap it to view details, tap the Remind Me button, and then tap the At a Location button.

Unfortunately, that feature seems to be limited to the iPhone. When I do the same thing on my iPad 2, there’s no At a Location option, even though it’s an iPad 2 with 3G and a GPS chip built in. Fortunately, reminders with location alerts that I create on the iPhone don’t lose that information when synced to the iPad via iCloud.

Swipe to Advance in the iPad Calendar — The lack of this feature was a pet peeve of mine in previous versions of iOS on the iPad. Although the Calendar app was designed to look like a real desk calendar, even including bits of torn paper at the top of the “sheets,” it wasn’t possible to swipe to turn the virtual pages. Instead, you had to tap the linear navigation controls that appear below the calendar.

Now, finally, you can swipe to advance the pages of the calendar views. In fact, you can drag a finger slowly from an edge or corner to turn the pages gradually, as introduced in the iBooks app.

Wireless Sync without Power — One of my favorite iOS 5 features is syncing devices over a wireless network. With the Wi-Fi Sync option enabled, the iPad, iPhone, and iPod touch initiate a sync when plugged into a power source. So, for example, you can plug a charging cable into an iPhone and sync, even if the computer it belongs to is running in another room.

It turns out that even the charging cable isn’t required — it’s just a convenient way to start an automatic sync. To initiate a manual sync with a device that’s been set up with Wi-Fi syncing, go to Settings > General > iTunes Wi-Fi Sync > Sync Now. Or, in iTunes, select the device in the sidebar and click the Sync button.

Enable AirPlay Mirroring on iPad 2 and iPhone 4S — I include this tidbit because the control wasn’t easy to find. The iPad 2 and iPhone 4S (but not the iPhone 4) can mirror their screens on an HDTV through an Apple TV running the latest version of its software, wirelessly, using AirPlay. 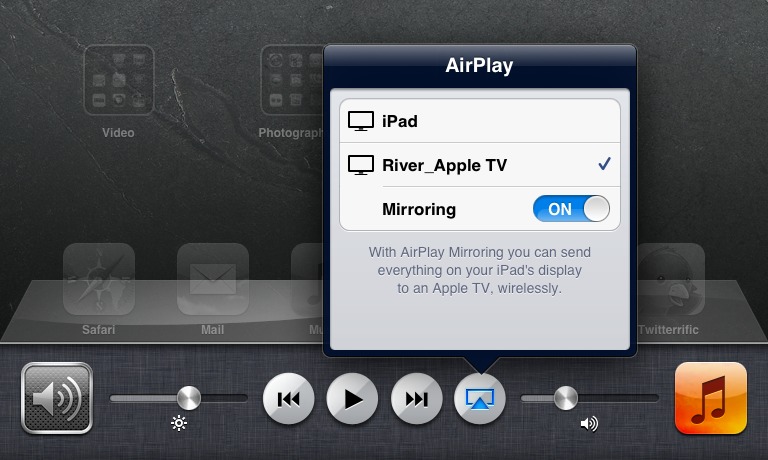 This feature is great for giving presentations, although it would be even better if there was an option to also show finger taps (without jailbreaking the device) to enable viewers to better follow along when you’re doing live how-to demonstrations. But there’s also an added benefit: Using mirroring, you can watch video content that is otherwise blocked from normal AirPlay playback, such as the ABC app.

Open the Camera App Quickly — A helpful new photo feature is the ability to tap a Camera button on the iPhone’s lock screen to jump directly to the Camera app. However, pressing the Sleep/Wake or Home buttons doesn’t reveal this handy new control. I kept searching for a preference to enable the feature, but it was actually under my thumb all the time: double-press the Home button when the screen is locked. This action also reveals the music playback controls (the normal behavior for a double Home press in iOS 4). Surprisingly, the camera-enabled iPad 2 does not gain this feature — perhaps because the camera isn’t really good enough for taking photos?

Invoke Siri without the Home Button — On the iPhone 4S, pressing and holding the Home button activates the new Siri voice-activated assistant. If you’re not comfortable dictating commands like Scotty talking to a mouse in “Star Trek IV,” simply bring the phone up to your ear. The proximity sensor activates Siri, letting you talk as if you were making a call. The only catch is that you must first wake/unlock the phone to make the feature work. You can disable this option by going to Settings > General > Siri and turning off Raise to Speak.

Change the Order of Apps in the Notification Center — Swiping with one finger down from the top of the screen displays the helpful new Notification Center. You can change the order that apps appear — for example, suppose you want Calendar events to appear at the top of the screen instead of the current weather. Go to Settings > Notifications and tap the Edit button. You can then drag an item using its move icon (three gray stacked bars); tap Done to apply the change.

Others? — These are just a few cool features of iOS 5. As you run into others, I encourage you to share them in this article’s comments section.

Comments About Secrets of iOS 5