New with the iPhone 4S release is something Apple is calling AppleCare+, which turns the standard AppleCare extended warranty into an insurance policy of sorts. Whereas traditional AppleCare only protects against manufacturing defects and extends the tech support call window from 90 days to 2 years, AppleCare+ also covers up to two incidents of accidental damage. AppleCare used to cost $69; AppleCare+ retails for $99, and each incident of accidental damage may have a $49 service fee.

Previously, if you damaged your iPhone, you could attempt to throw yourself on the mercy of the people at an Apple Genius Bar for a free repair or replacement, but failing that, it could cost $200 or more. AppleCare+ replaces AppleCare for the iPhone in general, and it’s available for any new iPhone 4S, iPhone 4, or iPhone 3GS. Whether AppleCare+ is a good deal for you depends on how careful — and lucky — you are with your portable electronics; I generally like such insurance policies for devices that are easily dropped.

Apple said initially that AppleCare+ had to be purchased at the same time as the iPhone 4S, and that’s now possible, but we didn’t remember any indication of AppleCare+ appearing during the pre-order process. And when Tonya activated the iPhone 4S while talking with an AT&T tech support rep who was helping get all of our numbers associated with the proper devices, she didn’t remember seeing anything about AppleCare+ then either, though she was moving quickly. So the question is, if, like us, you somehow ended up with an iPhone 4S but not AppleCare+, how do you add it after the fact?

When asked, the AT&T reps at our local AT&T store found some indication in their information that AppleCare+ could be added only within the first 24 hours after activation, although they hadn’t yet tried to add it to any account either during or after the first 24 hours. Unfortunately, since Tonya activated the iPhone 4S on Saturday morning, we were outside the 24 hour window by the time we learned this information. So they recommended calling Apple at 800-MY-IPHON (800-694-7466), which we did. The Apple rep on the other end had no information about how long after purchase or activation AppleCare+ could be ordered, but his computer system allowed him to add it to our account. Phew!

When I started researching the situation online for this article, I found this note on the AppleCare+ page in the Apple Store. It clarifies the situation, noting that anyone who pre-ordered an iPhone 4S or 8 GB iPhone 4, or who purchased any model of iPhone after 14 October 2011, is eligible to purchase AppleCare+ through 14 November 2011. 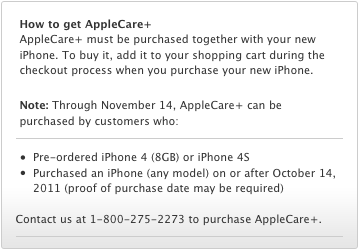 So there you have it. If you want AppleCare+ for a just-purchased iPhone 4S, you have a month to add it. But after that point, you’ll need to purchase AppleCare+ with the phone, or perhaps within that 24 hour period after activation that AT&T told me about.

Comments About Add AppleCare+ Through 14 November 2011