It wasn’t quite as dramatic as Aslan accepting his fate — spoiler: a temporary one — by lying down submissively on the stone tablet in C.S. Lewis’s “The Lion, The Witch, and The Wardrobe.” But getting Mac OS X 10.7 Lion to install on my Mac Pro did involve a resurrection, submission, and a benediction.

I had managed since Lion was released to install the Mac OS X update on three of my four regularly used machines: a new MacBook Air, a 2009 MacBook Pro, and a 2009 Mac mini. None of them required any extra effort to move from 10.6 Snow Leopard, although I had carefully made full clones of each boot drive in case I had to perform a restore.

The Mac Pro, a 2008 model, was much more persnickety. It had arrived with 10.5 Leopard installed, and never balked at running Snow Leopard. But it and Lion had a disagreement. Lion insisted my Mac Pro was running Mac OS X Server, although the installer didn’t initially come out and tell me that.

My first attempt to install Lion — again, after a full clone of the boot drive — led to a strange startup from the installer in which it was claimed the “server software” was missing. Try as I might, I couldn’t bypass that. Worse, Startup Disk wouldn’t let me start from any other volume, including a Lion installer on a USB thumb drive created using Dan Frakes’s instructions from Macworld.

After hours of gnashing teeth and invoking various gods of old, I dug up the Snow Leopard installer DVD I had tucked away, started with the C key held down, and performed a full system install over the existing Snow Leopard configuration. This took many hours, including all the interim updates, as I had a 10.6.0 disc. But it worked, and I was back to status quo ante.

After I complained about this on Twitter, an Apple public relations person got in touch via email. She requested logs and other information, and suggested a few changes from Apple engineers. The focus appeared to be on why Lion took my Mac Pro between its teeth, and refused to believe it wasn’t a server as it thrashed it about. I did have Apple’s Server Admin tools installed in /Applications/Server (I used them to administer remote copies of Mac OS X Server). And it’s possible I once had the file /System/Library/CoreServices/ServerVersion.plist in place on this system when I attempted to create a virtual machine from the Snow Leopard client. (That’s
technically not allowed under Snow Leopard’s licensing terms, but a fellow has to experiment. I wound up installing Snow Leopard Server into a virtual machine instead, which is allowed.)

I deleted the Server folder and confirmed that the ServerVersion.plist file didn’t exist, and tried again with a USB thumb drive made from the 10.7.2 release downloaded from the Mac App Store. The first time around, I received additional strange errors that I can’t even recall at this point — frustration will do that to you.

I poked around the Internet for ideas and found one that suggested zapping the parameter RAM (PRAM) which stores information in a quasi-permanent state. PRAM corruption can affect startup disk selection and cause various odd Mac behavior. The advice suggested not just one zap but two; since I’d already tried one, that sounded like good advice. (An AppleCare support person had suggested two zaps years ago, and I laughed, never having heard this before, but in that case it worked! Adam says that two or three zaps has been advised for decades.)

Restarting the machine and holding down Command and Option as well as the P and R keys all at once, I let the machine make a startup chime to indicate the PRAM had been zapped. I watched it cycle through to start again with the keys held down, and let another chime rip. Releasing the previous keys and holding down the Option key, to select the hard drive to start up from, the Mac Pro finally allowed me to select the Lion installer.

The Lion Installer booted and I was starting to cheer. I selected the option to reinstall Lion, and scrolled through the available disks. That’s when I saw I hadn’t actually gotten any further, but I did, at least, get a concise and straightforward error message. 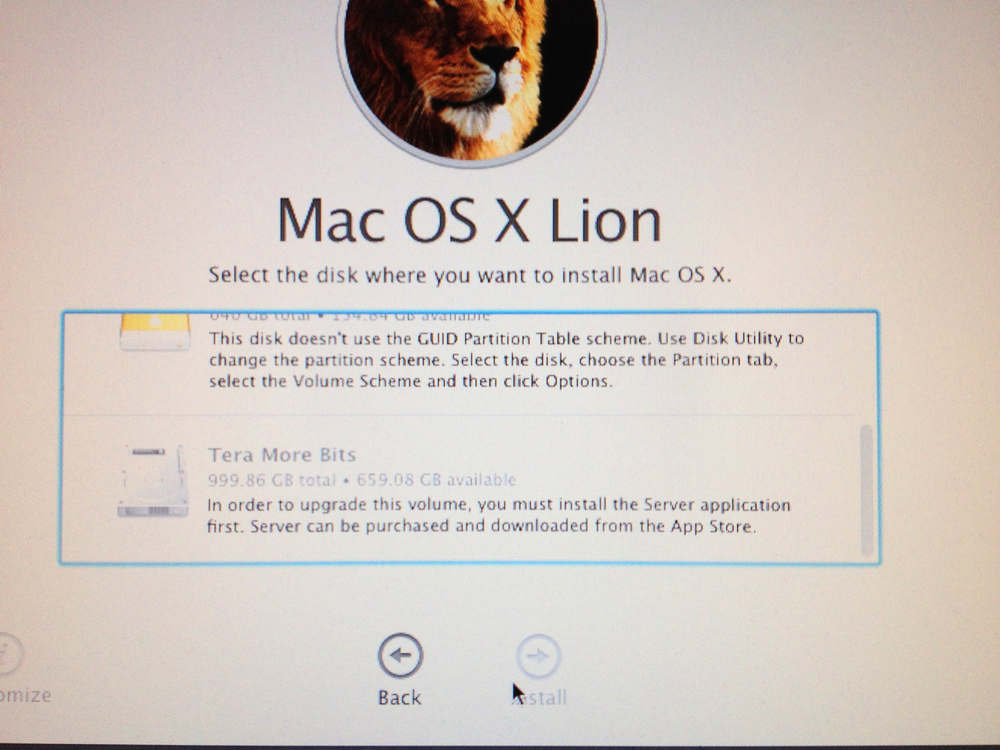 I gave up. Apple offered me, as a journalist, an out-of-warranty visit to the Apple Store Genius Bar, but I declined. Despite not working on a particular story — this one is an outgrowth — I accept free services from companies that I write about only if the service is directly related to something that I am testing specifically for an article or book and wouldn’t otherwise be purchasing for my own behalf. Otherwise, I pay from my own purse or do without.

In the end, I followed Joe Kissell’s always-sage advice in “Take Control of Upgrading to Lion.” I cloned my Mac Pro’s internal hard drive to an external hard drive, booted with the Lion USB thumb drive installer, erased the internal drive, installed Lion from scratch, and then used Apple’s Migration Assistant to bring in users, data, applications, and settings from the cloned volume. This worked like a charm, although it took several hours.

[During the Lion Developer Preview, I ran into a similar situation, where Lion refused to install over a cloned volume on an external hard drive, claiming erroneously the disk was a Time Machine backup. Erasing and cloning the drive again toggled whatever bit was blocking Lion. When in doubt with a recalcitrant Lion install, start from scratch. -Adam]

I’m sure I’m an outlier: something flipped a switch in my Snow Leopard installation that Lion refused to cope with. But it would have been nice if Lion included better troubleshooting to identify what it thought would be a problem in the system upgrade. I could have spent $49.99 to purchase Lion Server, but I wanted neither the server software nor the unnecessary expense.

No animals were sacrificed in this upgrade to Lion, which involved Snow Leopard resurrection and retirement, but it was awfully tempting to finger a knife blade meaningfully during parts of my ordeal.

Comments About Lion Struggles but Finally Submits to Install