Apple has released AirPort Base Station and Time Capsule Firmware Update 7.6, which fixes only three problems for the 802.11n-based AirPort Extreme, AirPort Express, and Time Capsule. Nevertheless, it proved to be a bit more interesting than I initially anticipated. Apple says that the update fixes:

I can’t say that I’ve run into any of these specifically, though I’ve certainly experienced problems with AirPlay in the past, and AirPort Utility said that my AirPort Express was reporting problems once the firmware update appeared. Even though my AirPort Extreme also needed the firmware update, its issues apparently weren’t considered serious enough for it to label them as problems. Updating was simply a matter of running AirPort Utility, selecting my AirPort Express on the left, and then clicking the Update Firmware button and waiting for it to download, install, and restart. 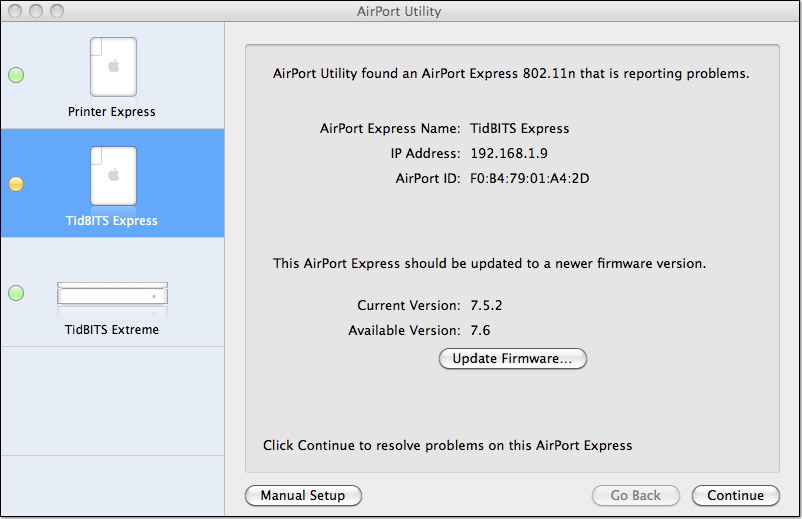 What I found more interesting was that Apple’s iOS version of AirPort Utility provides just as good an experience, and a more attractive one. I tapped the AirPort Extreme icon in the diagram, and then tapped Version > Download and Install to update my AirPort Extreme too. 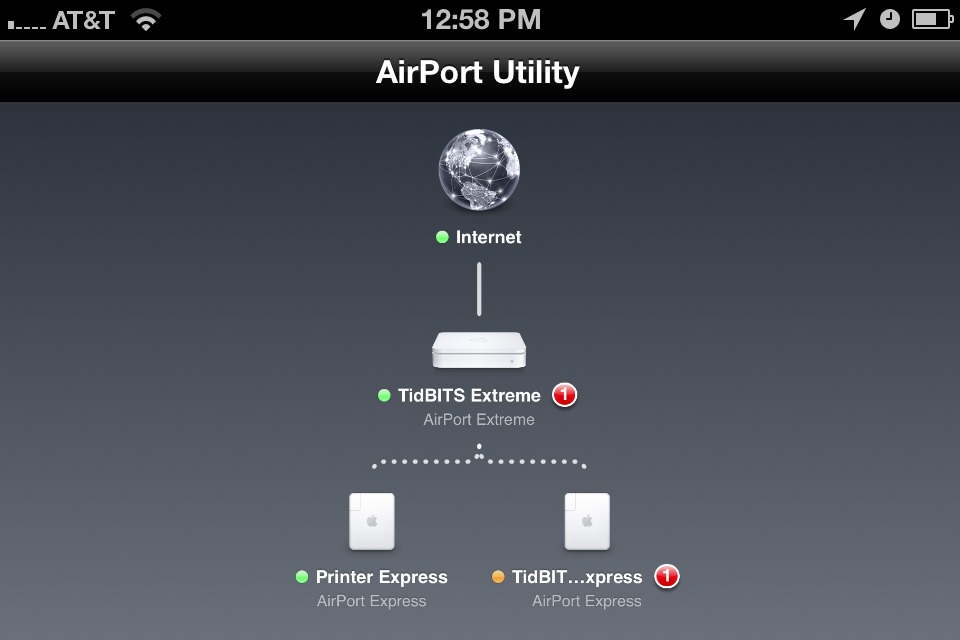 Notably missing from this update is iCloud support for remote access to files on AirPort disks and Time Capsules via Back to My Mac, which worked (and presumably still does) via MobileMe. AirPort Utility on the Mac, which hasn’t been updated recently, still has a MobileMe pane under the Advanced preferences, and no similar controls exist at all in the iOS version of AirPort Utility.

Somewhat surprisingly, given how smoothly my upgrades went, a number of commenters on the TidBITS site have reported problems with the firmware update. In most cases, the updated base station fails to appear in AirPort Utility after the update. Solutions range from cycling the base station’s power all the way to needing to perform a factory reset, after which the base station must be reconfigured from scratch. Because of this, it would be prudent to run AirPort Utility on the Mac, and choose File > Export Configuration File. Then, if something goes wrong and you need to reset the base station, you can use File > Import Configuration File to return it to its previous configuration set (this doesn’t change the firmware, just the
settings).

Comments About Firmware Update for Apple’s 802.11n Base Stations