In June 2012, when MobileMe draws its last virtual breath, among the data that Apple will consign to rubbish heap of history are all the photos you’ve stored in MobileMe Gallery. A number of alternatives are obvious — you can move photos to Flickr or to Facebook relatively easily from within iPhoto, and there are of course numerous other photo sharing sites.

However, another alternative has just appeared — the group photo sharing site ZangZing, which I’ve used heavily the last few months to allow parents of Tristan’s Ithaca cross country teammates to upload photos of all the races (see “Group Photo Sharing Grows Up with ZangZing,” 3 October 2011). Although ZangZing’s differentiating feature is the way it enables multiple people to share photos of the same event, its HTML5 underpinnings, modern design sensibility, and integration with numerous photo sources make it a fine personal photo sharing site as well.

And that’s where ZangZing has just stepped up to the plate to help MobileMe Gallery users looking for a new home for their photos. As I noted about ZangZing when I was first writing about it, it’s unusual in being able to read photos from other photo sharing services, including Picasa, Facebook, Flickr, Shutterfly, and so on. The newest addition is MobileMe, enabling you to transfer all your photos from MobileMe Gallery directly to ZangZing, even if you don’t have them in iPhoto (others could upload to your MobileMe Gallery albums too, though I don’t get the sense that many people took advantage of that feature). 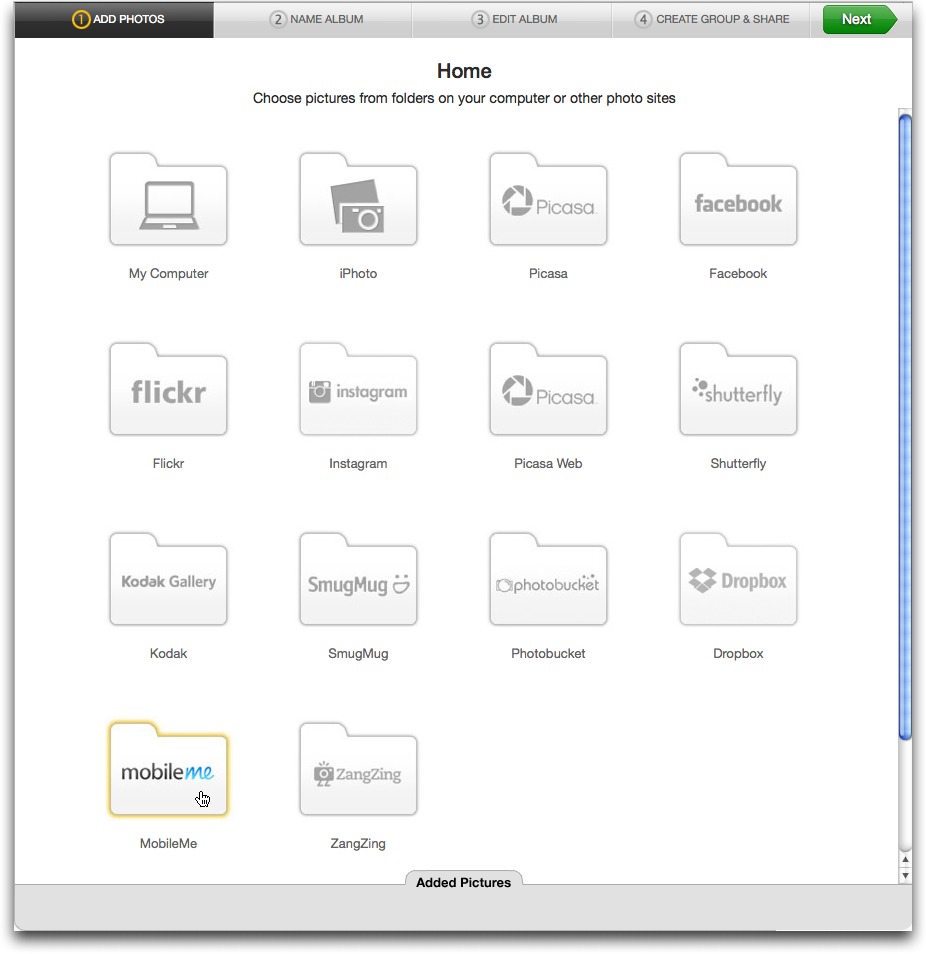 All you have to do is click MobileMe when creating a new album, confirm that you want to connect to MobileMe, enter your MobileMe login credentials so ZangZing can log in to your account, and select a MobileMe album to import. 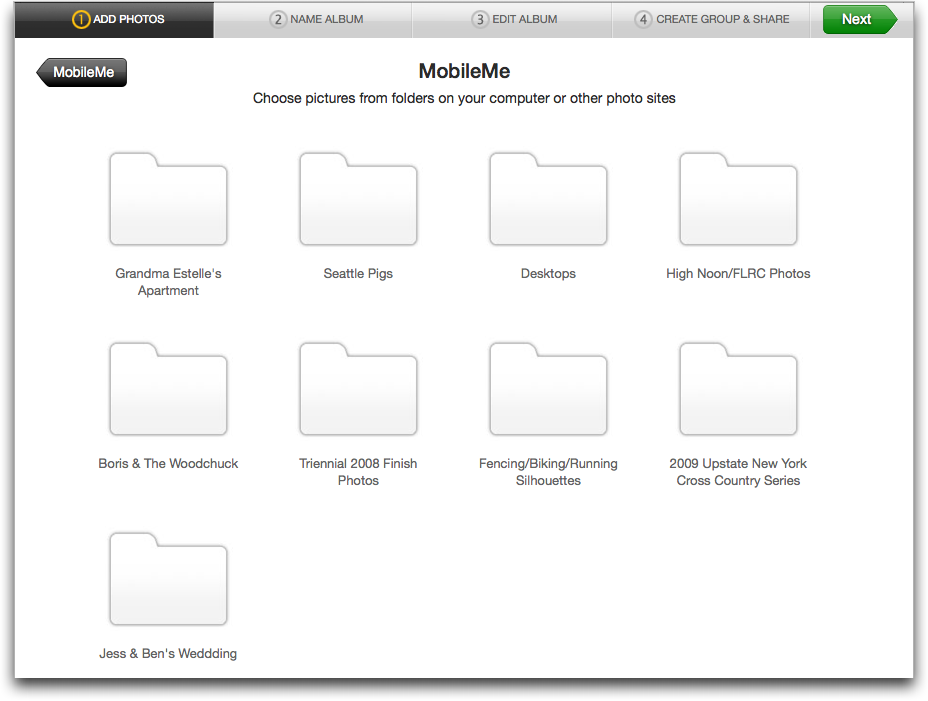 In my tests, the import process worked perfectly, and once the photos are in ZangZing, you can share the link to the album as you would anything else in ZangZing, opening it up to others to upload photos or keeping it locked down as you desire. Sharing future photo albums from iPhoto
is trivially easy with ZangZing, perhaps even easier than working with Flickr and Facebook within iPhoto’s interface because you manage the entire process from ZangZing’s Web site, which is where the final album ends up.

ZangZing remains free for now, though it’s likely that a premium account option in the future will provide additional storage space or other features. The company has started down the path toward financial stability by enabling users to purchase prints of photos in a variety of finishes and formats. 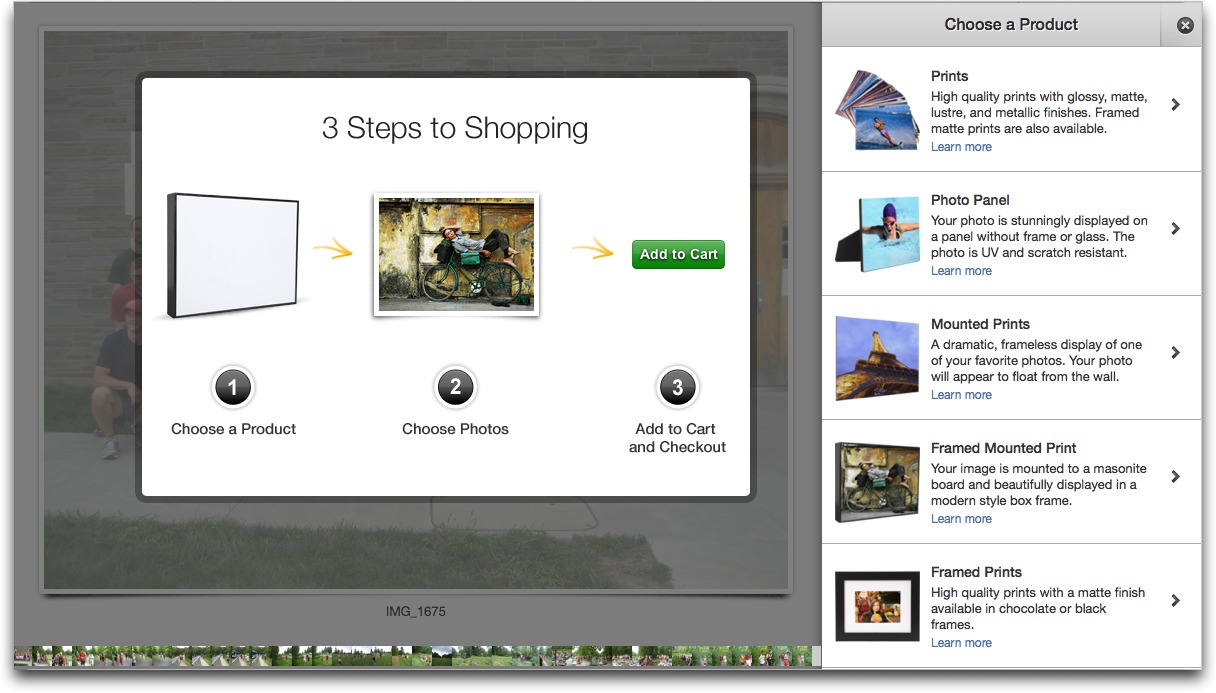 Now that ZangZing has rolled out the print products, other enhancements are appearing as well. For instance, I had requested the capability to download an entire album of photos at once, so as to be able to archive the complete cross country season’s worth of photos for the coaches and school library. That feature was on ZangZing’s list of things to implement, and shortly after the print products appeared, they contacted me to tell me that album downloading was available. So, if there’s something you’d like to
see ZangZing do differently, be sure to submit feedback, since they’re listening and reacting.