[Update: As I was putting the finishing touches on this article, Apple woke up and pulled iTether from the App Store, citing load on the carrier network. That’s a truly lame excuse, since carriers are happy to charge customers for the extra usage; worse, the iTether developers claim that their average user consumes less than 200 MB per month. The developers also say that they were entirely upfront with Apple about the purpose of the app, even providing Apple a video of how it worked. Nevertheless, I downloaded and tested the app, and wrote the article, so you can read what would have been true if Apple hadn’t gotten all protectionist on us. Those who bought the app before it was
pulled can continue using it.]

For many of us, being able to tether a Mac or iPad to an iPhone to share the iPhone’s 3G-based Internet connection would be compelling, if only we needed it regularly. For the occasional quick use, paying for the necessary data tethering plan is simply overkill.

In the United States, AT&T charges $45 per month for the DataPro 4GB plan, which provides 4 GB of data with tethering (additional gigabytes are $10 each). On Verizon Wireless, tethering (the Mobile Hotspot feature) costs $20 on top of an existing data plan (the cheapest is $30 per month for 2 GB) and includes an additional 2 GB. So we’re talking an additional $20 to $30 per month, just to share your Internet connection, regardless of whether you even need the extra few gigabytes that come with the tethering connection.

If you’re as offended as we are by these unnecessary charges — why can’t we just be charged for how much data we use, regardless of how we use it? — there’s a new option, iTether.

iTether, an iOS app that works hand-in-hand with special Mac or Windows software, enables tethering for a single $14.99 fee. What’s surprising about iTether is not that it works, though it does, but that it was approved for sale in the App Store, given Apple’s protectionist policies toward apps that compete with built-in features. Nevertheless, the company behind iTether, called Tether, has been selling BlackBerry and Android versions of the software for several years, so it seems unlikely that Apple could have failed to realize what the app does.

That said, iTether isn’t quite what you might expect. It works only over a USB connection, so you can’t use it directly with an iPad. The Android version of Tether has the same limitation, though the BlackBerry version can also work via Bluetooth.

The free Mac OS X software is tiny — only about 1.5 MB — but Tether’s Web site was so overwhelmed with traffic that I had to ask a friend for a copy. It installs several kernel extensions in /System/Extensions, along with the Tether application in /Applications. It also creates an Ethernet (en4) adapter in the Network preference pane (you may get a different number).

Once it’s installed, using iTether was easy. I made sure my MacBook was disconnected from my Ethernet network and I turned off Wi-Fi on both the MacBook and the iPhone, to ensure I was getting the correct results. Then I launched the Tether application on my MacBook and tapped the iTether app on my iPhone. The two look quite similar, showing some basic data transfer states and connection status. The Tether application automatically enabled the Ethernet (en4) network adapter, and the iTether app on the iPhone made the connection to the Internet via 3G. 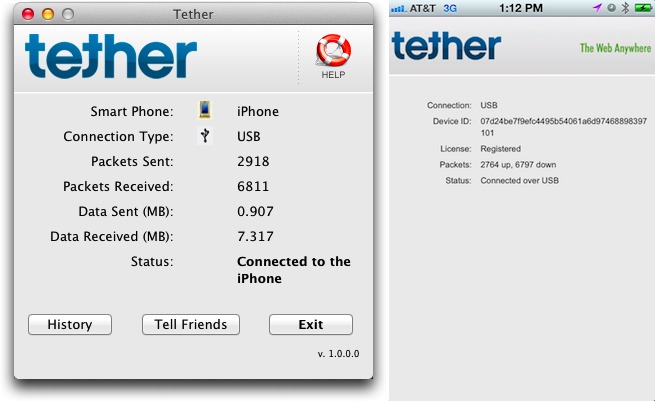 I didn’t perform extensive testing, since I pay for only 200 MB of data per month, but I had no trouble using Safari to load Web pages. I even did a speed test and found that I was getting about 1.5 Mbps down and 600 Kbps up, which isn’t bad.

But what about my Wi-Fi iPad? Harking back to the days when networking was far funkier, I gleefully opened the Sharing preference pane and turned on Internet Sharing to share the Internet connection coming in on Ethernet (en4) out via Wi-Fi. Then I forced both my iPad and my Mac Pro to connect to this new network, and lo and behold, it all worked.

(To be fair, this is a slightly abbreviated version of actual events, since I had to restart my MacBook to get past Mac OS X 10.7 Lion being slow, and I had to remember that I wanted Internet Sharing instead of a computer-to-computer network, and I had to try Internet Sharing twice to get the Mac Pro and iPad to pick up IP addresses properly, and so on. It was fiddly, but funky networking always is.)

The big unknown is if carriers will notice that their customers are using it to avoid paying for tethering. I don’t have a sense of whether or not they can unpack the network traffic sufficiently to determine that, but it might be possible. I’ve seen carriers threaten to switch customers to tethering plans automatically in the past. Or, it may be one of those situations where they are unlikely to notice if you use iTether sparingly enough to avoid setting off warning bells.

Comments About iTether Approved, then Pulled