I often listen to music on my iPad, but I forget that the iPad can listen as well. I discovered this recently when my brother-in-law recommended a TV show called “From the Edge with Peter Lik.”

The show is about Lik, an accomplished landscape photographer, and how he gets his amazing shots. To be honest, it’s less about the particulars of photography and almost entirely focused on how the adventuresome Australian goes out to scenic locations and, sometimes, the difficulties he runs into, such as waiting all night in freezing Arctic weather for auroras that never appear. (Also, no disservice to Lik, but the real star of the show is the breathtaking video his crew produces of each location.) It’s fun, and makes you want to explore beautiful remote areas of the world.

Watching my first episode, I noticed that a free companion iPad app was available, offering the photos that Lik ends up with, behind the scenes material, and the like. Being a photographer, I couldn’t resist downloading it.

What I didn’t expect is that the app is meant to be used while you watch the show. And it does so in a novel way: Using the iPad’s microphone, the app listens for the show in the room’s audio and synchronizes its content with what’s happening on screen. As you watch, you can flip through images taken from the shoot, and see which one Lik chose as his favorite. 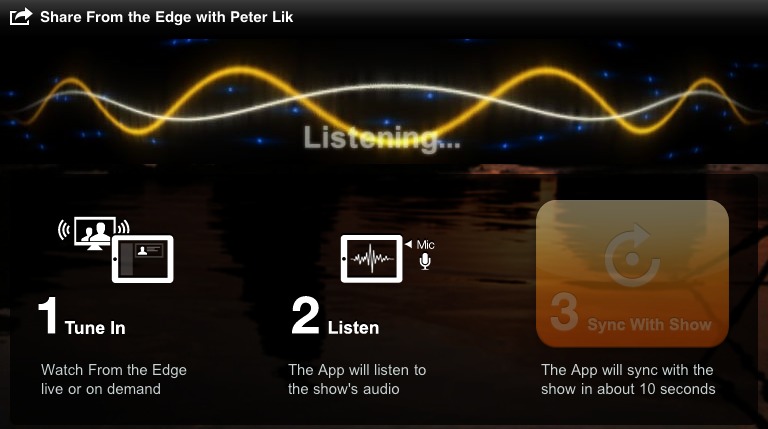 Unfortunately, the app now includes a note that “This app will not be supported after Dec. 31,” suggesting that the show has already been cancelled.

I’m surprised (or perhaps just unaware) that more TV shows or other media don’t take advantage of this technique.

Something similar is IntoNow, a Yahoo app that isn’t restricted to a single show. Like music-discovery apps such as Shazam and SoundHound, IntoNow can identify nearly any television show from its audio. It works whether you’re watching live television or something streamed or stored, such as using Hulu or iTunes.

Tapping a large green button makes IntoNow start listening, and in less than a minute it returns a result if it finds a match. From there you can view related Twitter messages, see who else has watched the show recently, and otherwise connect with people you know who enjoy television. Since I don’t watch much TV, the app is purely a novelty, but the technology is certainly interesting. 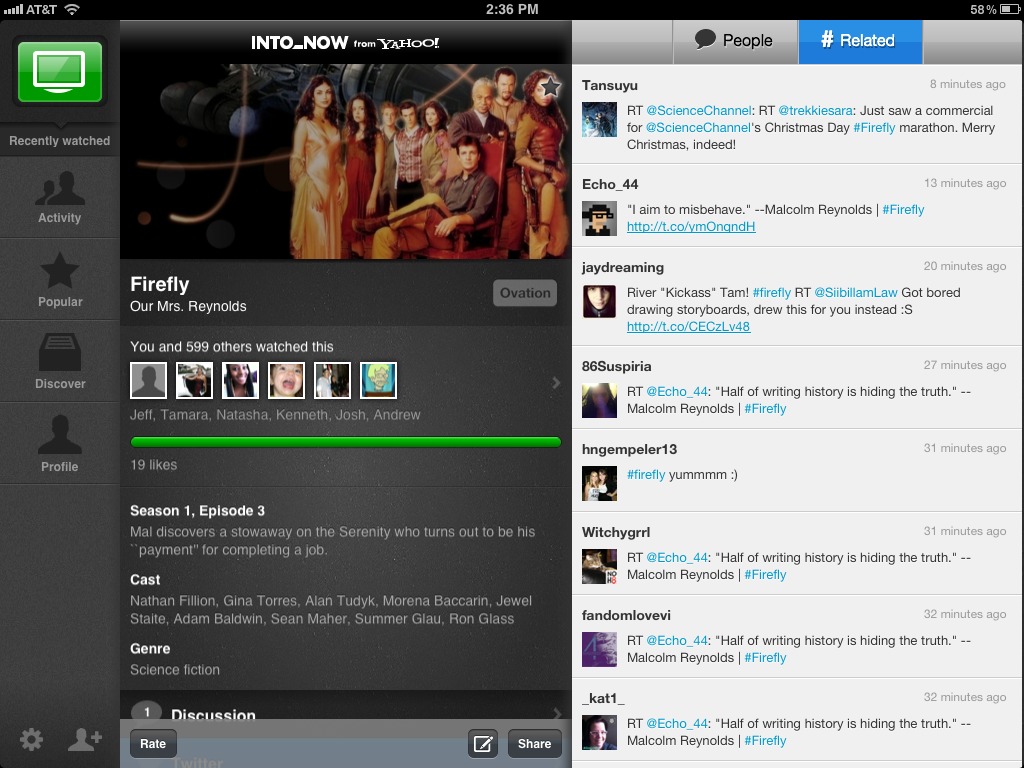 In looking for other listener apps, I did find one that sounds interesting, peculiar, and extremely specific: the $1.99 Melon Meter. You place your iOS device on a watermelon with the microphone touching the outside rind, and then rap on the melon. The app allegedly tells you whether the melon is fresh based on the thumping sound. (I admit I didn’t buy and test the app — I was a little worried that the grocery store’s produce department might not appreciate my test
matrix.)

It’s easy to pay attention to an iPad’s large colorful screen, but seeing is just one of our senses that an iOS device can enhance. I don’t look forward to any odor-related apps or accessories, but I do like the fact that the iPad can listen intelligently and improve an experience such as watching TV. If you can recommend other apps that perform similar feats, please share them in this article’s comments on the Web.