I’ve used Rogue Amoeba’s Audio Hijack Pro for years to record the audio versions of TidBITS articles (you did know you can listen to all our articles, both on the TidBITS Web site — look for the Listen link in the article’s metadata — and as a podcast, right?). But as much as I appreciate what Audio Hijack Pro does now that I have it set up, I have to admit that its myriad settings, formats, effects, and options rather flummox me, as someone who doesn’t know much about audio.

So when Rogue Amoeba’s Paul Kafasis pinged me to tell me how easy it is to record audio from any source with their latest app, called Piezo, I was curious to see if even I would be able to use it successfully from the very first launch. In short, Piezo lives up to Rogue Amoeba’s claims — it really is dead simple to use regardless of how much you know about audio. Of course, there are some tradeoffs made in the name of simplicity — and in meeting Apple’s requirements for being in the Mac App Store — but for anyone who can’t live with those tradeoffs, there’s always Audio Hijack Pro.

When you launch Piezo, the first thing you’ll notice is its interface, which is simultaneously intensely familiar and totally unusual. It’s unusual because it looks nothing like a standard Mac application, but that’s not upsetting because of how faithfully it echoes the look of a recording device from the early 1980s, complete with a pair of VU meters that accurately present the volume on the left and right channels in decibels — when their needles are moving, you know you’re getting audio. Even more achingly correct is the rolling timer that advances just like the counters on the cassette deck I long ago used to record LPs for playing in the car; it’s the indication that you’re actually recording. While young people may
not appreciate the black plastic and fake woodtone look as much as those of us who remember using analog stereo equipment, the interface is both gorgeous and extremely usable. 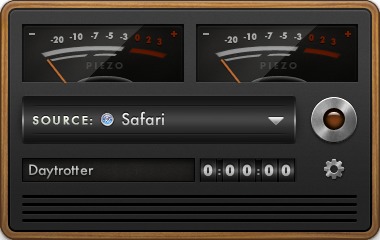 To underline how easy it is to record with Piezo, on first launch, the Piezo Help window outlines the three steps necessary for recording:

Choosing the source for your audio is merely a matter of picking from the Source pop-up menu. You can choose among various applications, choose applications that aren’t listed, and also record from devices that bring sound into your Mac. If you’ve launched Piezo after the app you select, Piezo has to quit the app and relaunch it to be able to capture audio it plays. That’s one of Piezo’s tradeoffs for not relying on software components that Apple doesn’t allow in the Mac App Store, so you’ll want to make sure you start Skype and iChat conversations that you plan to record after you launch Piezo. 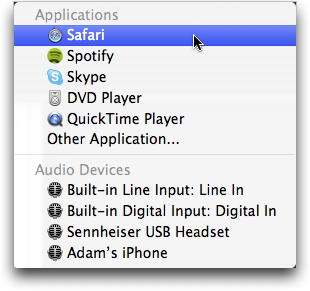 If you want to get fancy, you can click a gear icon to reveal a popover that lets you enter a name for your recording, add a comment, and choose from five quality pre-sets (there is no way to customize the formats further — that’s another tradeoff, but one I appreciate, since there are so many options in Audio Hijack Pro): 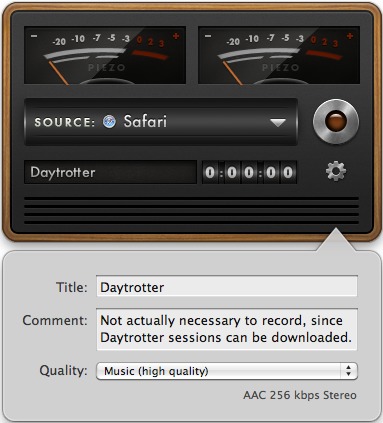 The final part of Piezo’s minimalist interface is a Preferences window where you can set where recordings should be saved and if the file should be displayed automatically after recording (thus eliminating the need for the third step mentioned previously).

And, well, that’s it. Select the source, pick the right format, push the Record button, and start playing your audio. In my testing so far, it has worked well with apps that are simply playing audio, Safari, Spotify, iTunes (playing Internet streaming radio), and more.

I did experience issues recording conversations in Skype and iChat, where the current version of Piezo has two problems. The first is that Piezo causes you to hear what you say in the conversation as well, which is disconcerting at best, and nearly impossible to handle as the audio delay increases (Skype had a much longer delay than iChat in my testing). Rogue Amoeba knows about this bug and will be fixing it in an upcoming release. The second problem is that Piezo plays all the audio in a Skype or iChat conversation through the device selected in the Sound preference pane’s Output screen, rather than through the device selected in Skype or iChat. For me, then, the call audio came out my speakers, rather than through my headset.
Changing that setting in the Sound preference pane works around the issue, but I hope Rogue Amoeba will be able to honor the per-application sound output settings in a future update as well.

Not surprisingly, given its tight focus on making recording as simple as possible, Piezo has no editing capabilities at all. If you want to split recordings into pieces, or trim out unnecessary bits, you’re best off opening the file in Fission, Rogue Amoeba’s audio editor, or a similar program.

Piezo costs $10 and is available either directly from Rogue Amoeba or through the Mac App Store. It requires Mac OS X 10.6 Snow Leopard or 10.7 Lion, and it’s a 2.8 MB download.