The extent to which Apple is pushing Mac users to Mac OS X 10.7 Lion continues to befuddle many people for whom upgrading to Lion from 10.6 Snow Leopard is impossible, not feasible, or simply undesirable at this particular juncture. Certainly, if there’s a new technology that simply can’t be applied retroactively to Snow Leopard, that would make sense, but in the case of calendar sharing in iCloud, Apple’s compatibility intransigence seems almost capricious, given the standards involved.

I wrote last week about how BusyMac’s BusyCal can be used to work around iCloud’s Lion requirements, since BusyCal works perfectly with iCloud under Lion, Snow Leopard, and even 10.5 Leopard (see “BusyCal Brings iCloud Calendars to Snow Leopard,” 5 December 2011). That particular magic comes in part from the cleverness of BusyCal’s creators, for sure, but also in part because BusyCal supports the CalDAV standard for calendaring, and iCloud (as was the “new” MobileMe before it) is a CalDAV server.

Hang on a second, isn’t Apple’s own iCal in Snow Leopard a CalDAV client? If iCal could connect to the CalDAV-based MobileMe, why can’t it connect to iCloud? The short answer is, it can; Apple just doesn’t make it easy (thanks to alert reader Thomas Armbrüster, whose comment on my BusyCal article got me looking into this topic).

The hard part of configuring iCal under Snow Leopard to work with iCloud is that you have to know certain server configuration settings. Maggie McFee has a blog post that provides instructions on setting up Snow Leopard’s iCal to talk with iCloud, and Macworld’s Mac OS X Hints also has some instructions. However, I’m not certain either of them still work, since the tricks they suggest for finding the name of your particular iCloud server don’t seem to reveal the necessary details anymore.

Luckily, if you also have access to iCal on a Mac running Lion, there’s an easier approach. First, for safety’s sake, back up your iCal data on the Mac running Snow Leopard by choosing File > Export > iCal Archive. Keep that file handy in case you want to revert to your old settings and calendars, since you’ll be overwriting everything with these steps. 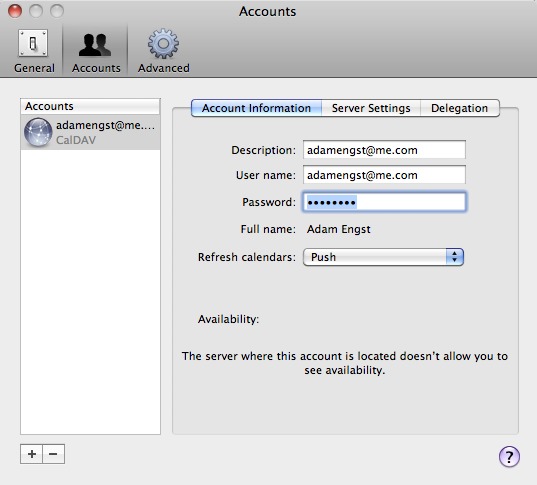 Just for giggles, click Server Settings to see the server address and path that are otherwise difficult or even impossible to come by. 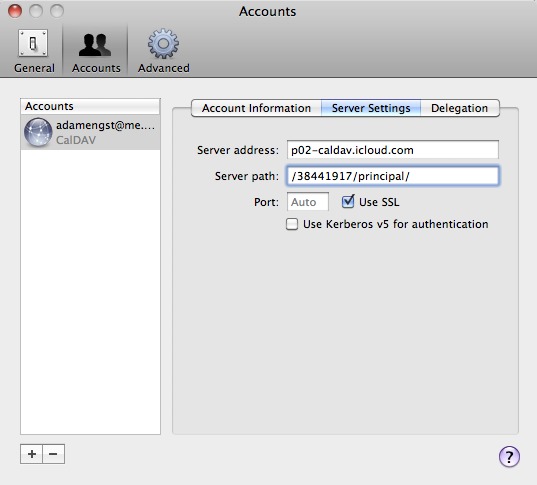 Once I did this export and import, and re-entered my iCloud password, iCal in Snow Leopard worked perfectly with iCloud, both sending and receiving events. Since using iCal makes my teeth hurt, no matter what the operating system, I’ll be sticking with BusyCal, but hopefully this will help people who would prefer to get a Snow Leopard Mac’s calendars on iCloud for free.

“So,” I can hear you saying, “what about Address Book in Snow Leopard? It’s a CardDAV client, isn’t it?” You had to ask, didn’t you? The short answer is that this export-from-Lion/import-into-Snow-Leopard approach doesn’t work for Address Book; certain server settings still don’t come over properly. However, it may be possible to edit those settings — like the ones I showed above — into the relevant Configuration.plist file manually, as roughly outlined on this blog post at Hsiaoi Collection (you don’t need to use the command line; any text editor will do). I followed the directions and got my copy of Address Book
to read data from iCloud once, but it won’t bring in or send out changes, rendering it rather useless. Others have gotten this hack to work; this MacRumors discussion offers more detail, but I’m not sure what’s different on my Mac. If I can figure out a reproducible set of steps, I’ll write more.

Comments About iCal in Snow Leopard Can Participate in iCloud