With the release of version 1.5 of the iOS reading app iBooks, Apple has made a few welcome changes aimed at enhancing your reading experience. None are earthshaking (unless you need the white-text-on-black, as people with certain vision problems do), but if you are an iBooks user, the release is a good excuse to take a moment to learn more about iBooks. Let’s look at what’s new in iBooks 1.5, and make sure you know the nuances and special tricks.

Previously, you could tweak iBooks for reading in different lighting situations by changing the overall screen brightness or (for EPUBs only) by switching the background page color to sepia. In a PDF, the Brightness button is near the upper right, while in an EPUB, the Brightness setting was previously tucked away in the Table of Contents view. (To switch between PDFs and EPUBs, on the iPad, tap the Collections button. On the iPhone or iPod touch, tap the Books — or whatever the label may be — button at the top of the main view. In the iPhone screenshot below, I’m in the PDFs view, so I need to tap the PDFs button to switch to a different collection.) 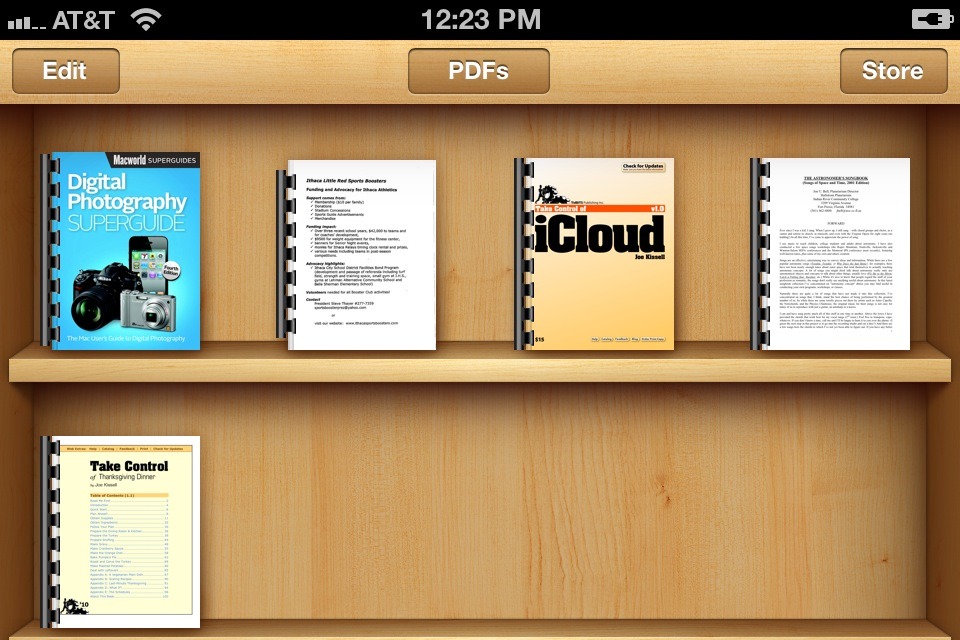 In iBooks 1.5, Apple has enhanced the display options for EPUB viewing and grouped them in the Fonts menu, so the Brightness control has moved there. The Sepia switch used to be immediately available on the Fonts menu, but now it’s a button nested under a new Themes button, along with the new Night option. The Night option shows the ebook with white text on a black background — a setting that will work better for some people’s eyes and which will cause your iPad to emit less light, something that anyone trying
to sleep nearby will appreciate. 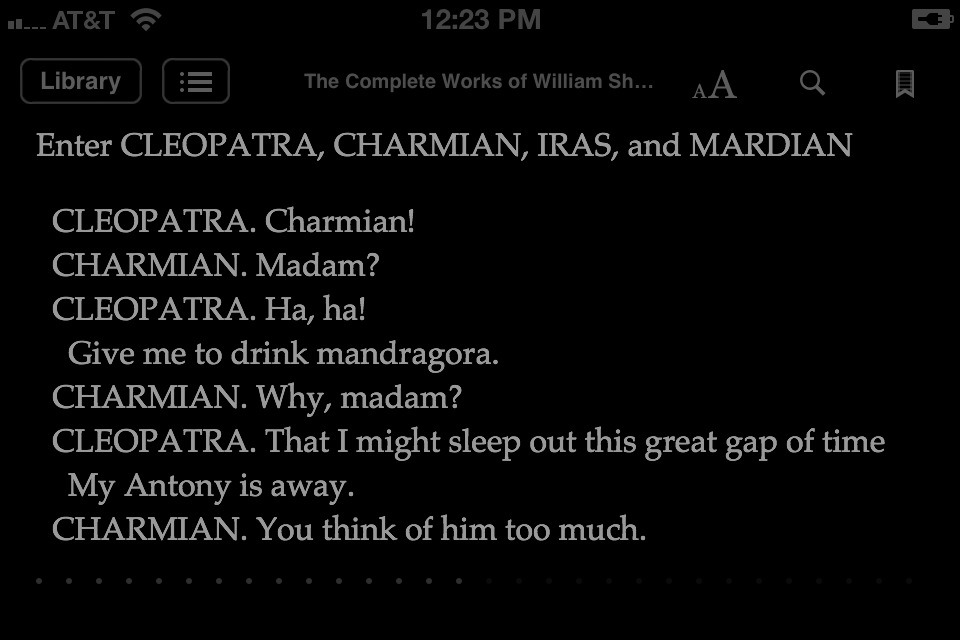 On the iPad only, there’s also a new Full Screen toggle switch nested under Theme; turn it on to make your EPUB look less like a book in favor of showing a bit more text at once — EPUB expert Liz Castro calculates the increase in text shown at about 15 percent. For example, with Full Screen on while in the landscape orientation with two “pages” showing side-by-side, the image that looks like the inside of a book spine
disappears, making the two “pages” look like two columns on a single page.

Apple has also revamped the lineup of fonts that readers can choose from. In the serif camp, Baskerville and Cochin have been replaced with three new fonts: Athelas, Charter, and Iowan. On the sans-serif side, Verdana is out, but Seravek is in. Georgia, Palatino, and Times New Roman remain as before. Apple gives no reason for the switch to these little-known fonts, but our own Glenn Fleishman suggests, at BoingBoing, that the new fonts are simply better for on-screen reading. As always, it’s worthwhile trying a few different fonts and sizes to see what you like in the context of a particular publication.

One small touch added in version 1.5 is that the generic covers of ebooks that lack designed covers, such as many public domain texts, now have a leather-bound look. In the screenshot below, the “New” ebook called “No Special Cover” is one that I created myself to test whether an ebook had to be some sort of anointed classic to get the fancy cover or just be one that didn’t get a cover specified for it by the publisher. So any EPUBs you create yourself using Pages (or even Automator!) will get these new covers if you don’t specify your own. iBooks seems to assign the color and style of the covers randomly, which makes for nice variety. 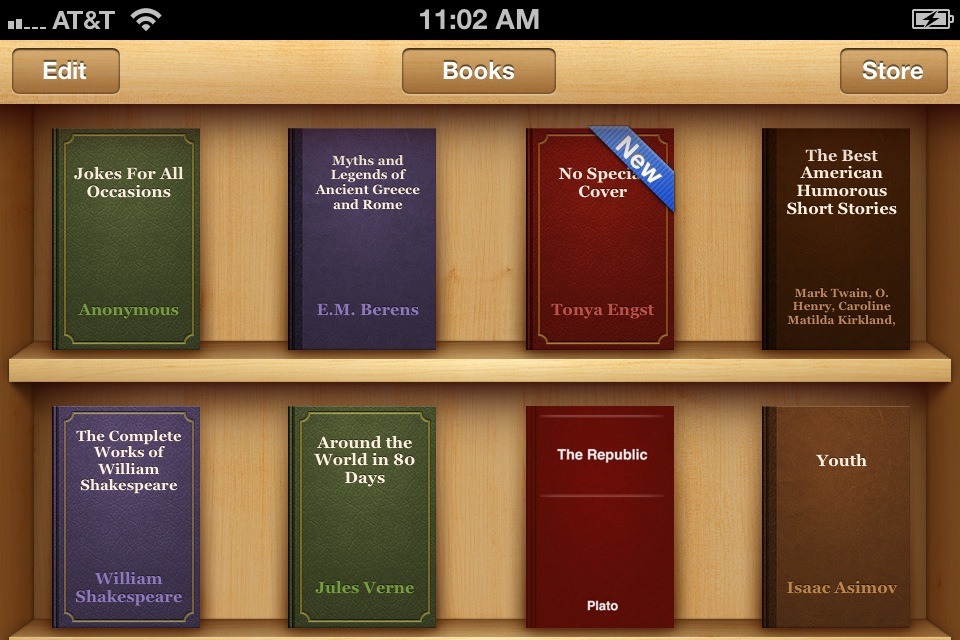 Much like jotting your thoughts in the margin of a print book, you can attach notes within the text of EPUBs in iBooks, and the basic procedure has not changed in iBooks 1.5: double-tap a word, drag the blue selection dots if desired to expand the selection, and then tap Note. As you type, the note has a popover-style triangle pointing to the selection (previously, the note looked like a sticky note). Tap the Hide Keyboard button to complete and save your note. To change the color associated with a note or to
delete a note, after you’ve created it, tap its associated text and then tap either the color of your choice or the red-slashed delete button. 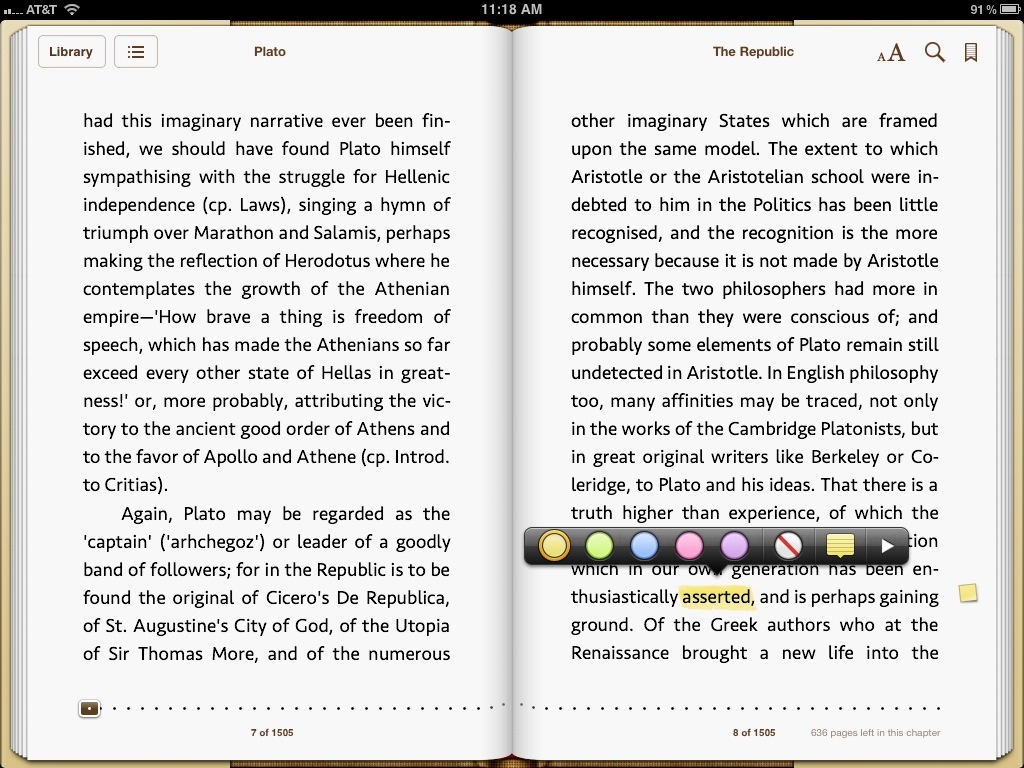 In the previous version of iBooks, the completed note displayed a small icon in the margin that you could tap to view the note in context, and that icon had the note’s date on it. In iBooks 1.5, you get a smaller and more refined icon, but no date. You can view all your notes at once in the Table of Contents view; previously, notes and bookmarks were combined under the Bookmarks button, but now they appear when you tap a separate Notes button. A note’s date appears in the list, so it’s not a big deal that the margin icons no
longer include it.

A helpful iBooks feature that remains unchanged in iBooks 1.5 is that if you own more than one iOS device, your notes (and highlights and bookmarks) can appear in copies of the same ebook on all your devices, so long as you are logged in to the iBookstore with the same Apple ID (in Settings > Store). To turn this option on, tap Settings > iBooks and then turn on the Sync Bookmarks switch. Be sure to turn it on for all devices that you want linked! 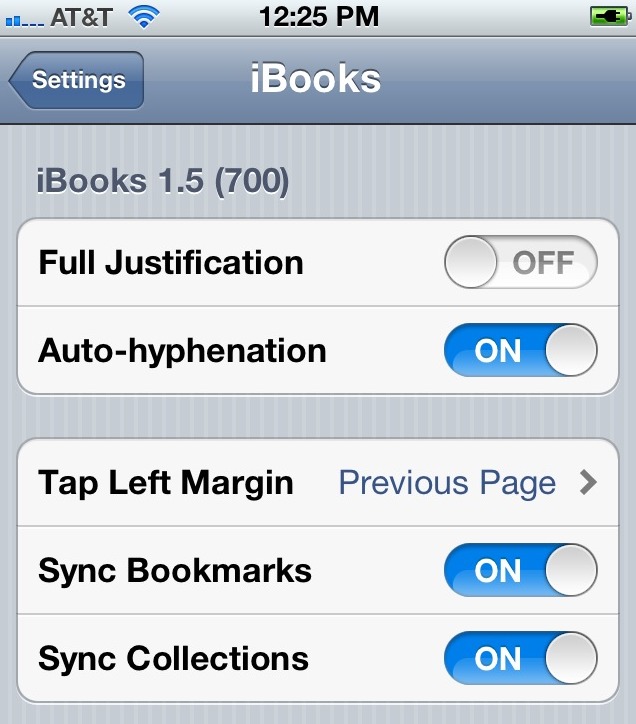 That’s the end of today’s iBooks lesson. I hope you’ve found a few useful tips, and feel free to share more iBooks tips in the comments below.