My eyes aren’t terrible, at least if I’m wearing the corrective lenses that fix my massive myopia. But there are plenty of times when I need to read something that’s too small to make out in the current lighting conditions — a serial number on the back of a device, a restaurant menu in dim lighting, the details on some piece under the car dashboard. I’ve become fond of my Petzl Tikka 2 head lamp for throwing bright light on whatever I’m working on, but I can’t go out in public with LEDs glaring from my forehead, and even then, it doesn’t help with things that are too small to see well.

The deceptively simple solution for such situations is Mahboud Zabetian’s $1.99 iOS app Lumin. It performs two basic tasks: magnification and illumination, but when you combine them on an iPhone, you end up with a device that can help anyone whose eyes aren’t what they used to be.

Lumin uses your iOS device’s camera to display a magnified image of whatever you point it at. Most of the time you’ll want to use the higher-resolution rear-facing camera, but you can switch to the front-facing camera (to make sure you don’t have lettuce in your teeth). Lumin’s magnification goes beyond what the Camera app allows, perhaps because Lumin’s goal is just to let you read something, rather than stressing about whether or not it would be a good photo. And if you want to magnify even further, the normal pinch-to-zoom feature of the iPhone works fine. 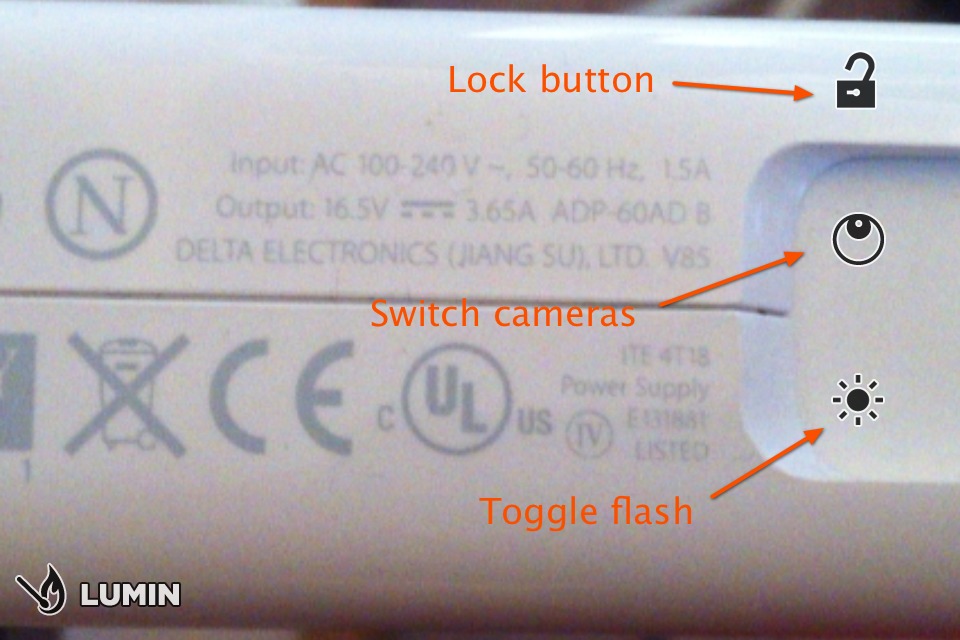 If you’re using an iPhone 4 or 4S, a tap on an onscreen button turns the flash into a little LED flashlight, illuminating whatever you’re looking at. There’s nothing new here — Apple is rejecting flashlight apps because there are too many in the App Store already — but being able to shine a constant light on small print in a dark area is way easier than using the flash normally, when it’s on only for the instant the picture is being taken. 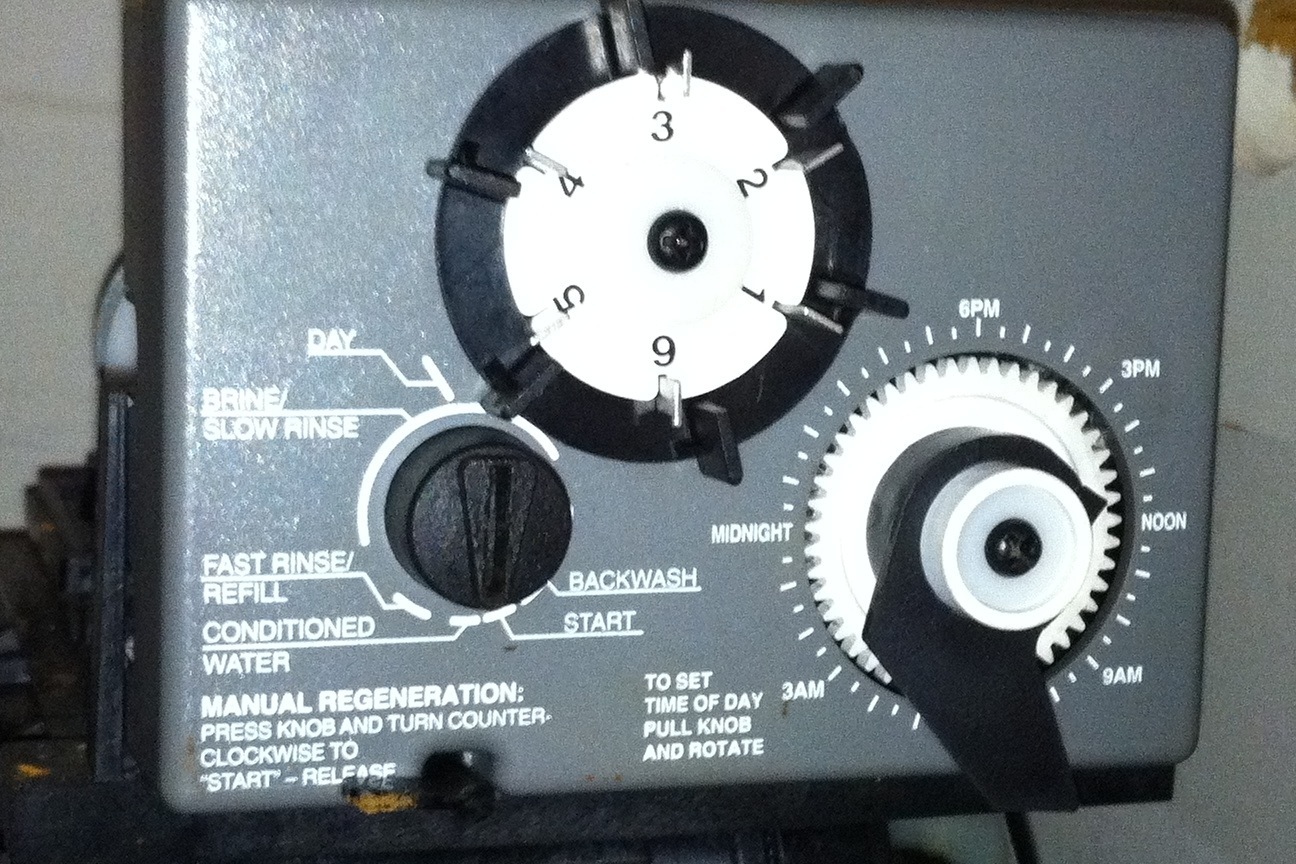 In most situations, you’ll use Lumin in real time as a live magnifying glass. But when you want to transcribe a serial number or look at something carefully, a tap on Lumin’s lock button freezes the image. You can even pinch to zoom further, if the magnification level of the frozen image isn’t sufficient. The image sticks around until you tap the lock button again, unless you instead use the share button to save it to the Camera Roll, share it via email, or post it to Twitter. And when you’re saving a picture to
the Camera Roll, Lumin gives you the option of saving the magnified image, the original unmagnified photo, or both. 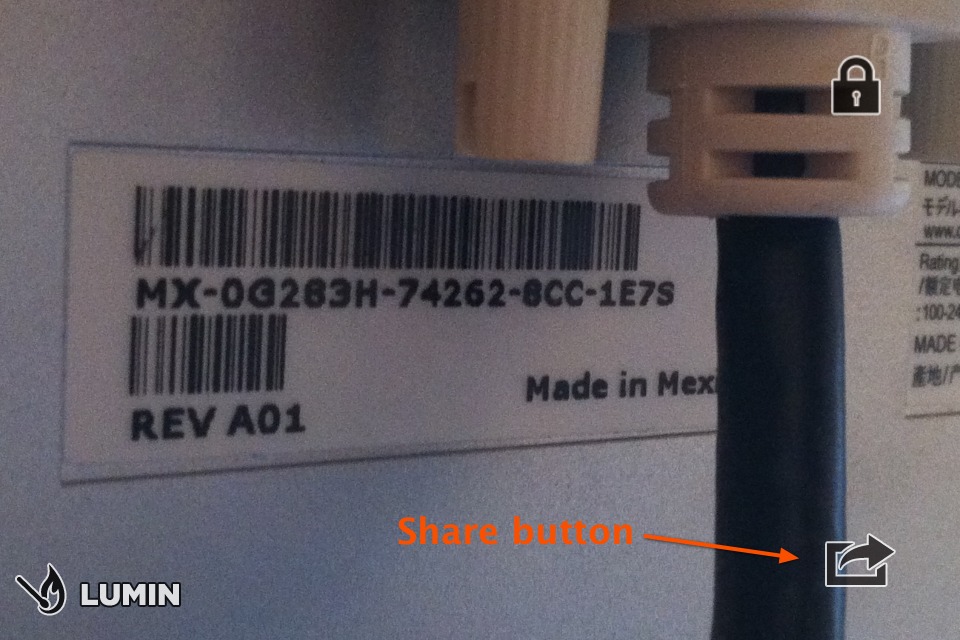 The only problem I had with Lumin is that because of the extreme magnification level in the camera, holding the iPhone steady long enough for Lumin to focus sometimes proved tricky. You won’t want to use it for reading a bunch of stock prices from the newspaper, for instance, unless you could make a little stand that would hold it steady at the right distance from the page. Having to tap the on-screen lock button was also difficult in some situations; it would be great if Lumin could freeze the image when the volume up
button was pressed, as the Camera app can do in iOS 5.

You’d be hard pressed to find a normal illuminated magnifying glass for less than $5 (most I found were in the $20-and-up range), much less one that can take photos and is always in your pocket or purse. So if you find yourself wishing small things weren’t so hard to see, give Lumin a try.

Comments About Lumin Turns Your iPhone into an Illuminated Magnifier