The award for greatest public embarrassment experienced in 2012 so far must go to the New York Philharmonic season-ticket holder sitting in the front row of Avery Fisher Hall in Lincoln Center whose iPhone produced a continuous marimba sound because of an alarm going off — until the conductor stopped the orchestra and the patron managed to turn it off.

The concertgoer had just been issued the iPhone by his company the day before, swapping out a BlackBerry, and he had no idea an alarm was set, according to a New York Times account. But is it his fault? I examined this issue, talking with usable design guru Donald Norman (once a key figure at Apple before Jobs’s return), for an item in the Economist.

Is it the phone owner’s fault? By his telling, he dutifully flipped the mute switch on the iPhone to the silent position. But alarm sounds override mute. This makes some sense: you don’t set an alarm to forget it. John Gruber comes out in favor of the current mute behavior at Daring Fireball. Andy Ihnatko suggests that everyone’s expectation of muting is different, and thus no particular behavior can ever be correct except the one you want. He also points out that there is a completely silent setting: it’s called “turning the phone off.”

Andy notes that Apple’s insistence on simplicity, and usually rightly so, means that we can’t customize our phone to match our expectations. It would require a bunch of switches, and everyone’s would be slightly different. Google might offer this with Android, or allow developers to control muting behavior, but Apple prefers less complication, even if that’s less ideal for everyone.

There’s a simple way out that wouldn’t involve more complexity, just one more switch in the Settings app: Performance Mode, just below Airplane Mode. Airplane Mode disables all radios on an iPhone: cellular, Wi-Fi, Bluetooth, and even the passive GPS receiver. (You can re-enable Wi-Fi and Bluetooth separately, however.)

Performance Mode would let you tap, set a duration or a range (conceivably being tied in to the Calendar app, even), and disable all audio of any kind during that period. It could also dim the backlighting so that if you fire up the phone, it’s minimally disturbing to others, and set vibration to the least buzzy setting.

One can see other technological solutions as well. While GPS doesn’t work well indoors, a combination of weak GPS signals and interior Wi-Fi networks allows placement close enough to know if someone is inside or at least near a performance venue or a movie theater. A mobile phone could even give you a popup warning when you enter a true silence zone: “While in this location, all alarms and sounds are muted unless you tap Override for 1 Hour now.”

None of this is perfect. But isn’t it worth trying to preserve a little silence in places where such quiet is golden? The industry could step up to the plate, with Google and Apple leading the batting order.

Further Thoughts — Comments came fast and furious on this article both here and on Twitter. I wanted to address some of them for further discussion. 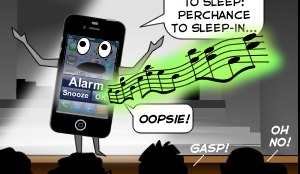 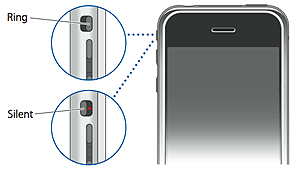