Over spring break in 2011, we spent some time in Denver and Boulder, and since I was using my iPhone heavily for GPS navigation while driving, I was extremely pleased with the Mophie Juice Pack Air battery-powered iPhone case for extending the iPhone’s battery life (see “Mophie Juice Pack Air Powers Longer iPhone GPS Use,” 23 April 2011). Since then I’ve continued using the Juice Pack Air when I’m not certain if my iPhone 4’s slowly declining battery will be able to withstand being out and about for an entire day.

But I’ve recently been testing an alternative battery-powered case — the $89.99 Slim Case System from Third Rail Mobility — because it offers an interesting design that could make it more attractive than the Juice Pack Air or similar cases in certain situations.

On its own, the Slim Case is a fine, if uninspired, black plastic snap-on case in two parts, just like the Juice Pack Air. (The dual-part construction is necessary so the iPhone can slide into the dock connector on the bottom part.) The case adds only .46 inches (11.7 mm) to the height of the iPhone, mostly due to the dock connector, and just a bit to the width and depth. It also weighs in at only .85 ounces (24.1 g). It has the usual cut-outs to provide access to the volume buttons, the power button, the headphone jack, and the camera lens. 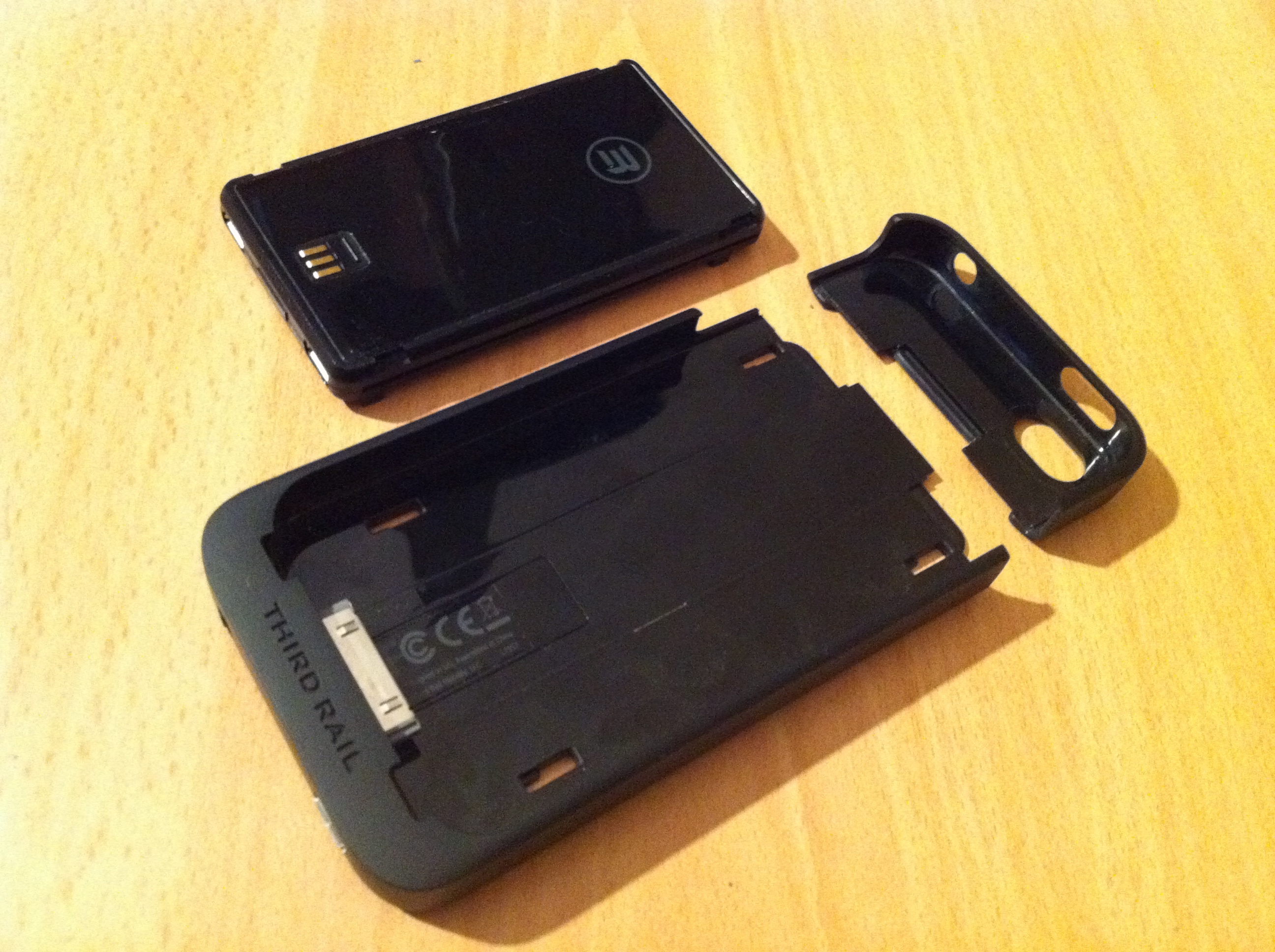 If those measurements sound nearly impossible for a battery-powered case, you’re right — they don’t include the removable Smart Battery, which adds another 1.4 ounces (39.7 g) and .27 inches (6.9 mm) of depth. The Smart Battery slides into four notches on the back of the Slim Case and connects to three gold-plated contacts to share its power with the phone. 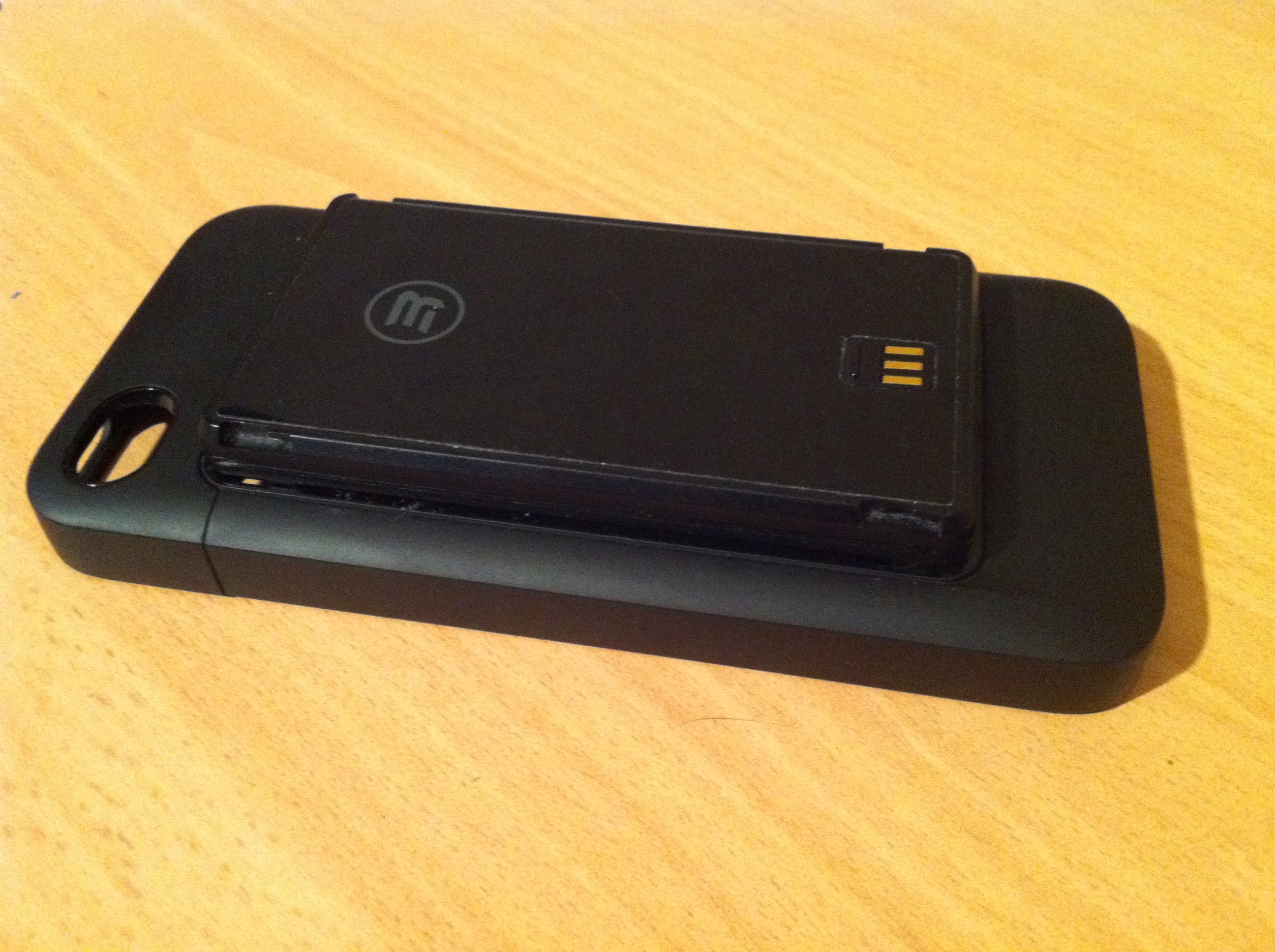 That’s clever in its own right, because it means you can carry multiple batteries and swap a new one in when the first one is drained. Extra batteries cost $59.99, and if you need another Slim Case but not more batteries, it’s $39.99.

But there’s more. Not only can the batteries be swapped in and out easily, they can be piggybacked on top of one another, since each battery has the same notches and contacts as the Slim Case itself. The utility of this is that you can charge multiple stacked batteries all at once. That’s great, since otherwise you’d need a separate micro-USB cable and free USB port for each battery.

The Smart Battery’s final trick is that it has not one, but two micro-USB ports, an IN port for charging the battery and an OUT port for using the battery to charge other USB devices like a Kindle or Garmin Forerunner 305 GPS watch via the included USB adapter cable. Obviously, the Smart Battery has only so much power — it’s a 1250 mAh battery — but one or more of them could be sufficient to get the Forerunner 305 back on the road. The Smart Battery also has a button on the bottom to check battery life and charging status via five LEDs.

So that’s all good, and if you need to extend the battery life of your iPhone and other devices without a truly bulky external battery, the Slim Case with multiple Smart Batteries might be just the ticket.

On the downside, as much as Third Rail gets major points for functional design, the Slim Case System has two form-related problems that I found annoying in regular use. First is simply that the edges are rather sharp, particularly on the Smart Battery, which is off-putting given the carefully smoothed edges that Apple has given the iPhone 4 and 4S.

Second, and more troubling, is how the Slim Case System interacts with how I use my iPhone. I always carry my iPhone in my right-front trouser pocket, top down and screen facing in. That way, when I put my hand in my pocket and pull out the iPhone, it’s in the correct orientation for instant use. If I do this while my iPhone is in the Slim Case and with the Smart Battery piggybacked on, my palm inevitably pushes the Smart Battery out of its connection notches, forcing me to click it back in before I pull the iPhone out of my pocket. I know it’s a small detail, but it bugs the heck out of me. If you’re carrying your iPhone in a different pocket or a purse, it wouldn’t be nearly as much of an issue.

In the end, I won’t miss the Third Rail Slim Case System after I return it. Although its clever approach would undoubtedly be useful for those who would need to swap in fresh batteries multiple times before charging, or who need to charge other devices on the go, neither of those is true of me. I’ll stick with the Mophie Juice Pack Air, whose 1500 mAh battery gives me sufficient battery life and whose smooth edges make it more comfortable in my pocket.