In a special event in New York City, Apple’s Senior Vice President of Worldwide Marketing Phil Schiller and VP for Productivity Software Roger Rosner unveiled a pair of free apps aimed at reinventing the textbook market: iBooks 2 and iBooks Author for the Mac. Not content to stop there, Senior VP of Internet Software and Services Eddy Cue and VP of iTunes Jeff Robbin then introduced the free iTunes U app for iOS.

iBooks 2 — iBooks 2 is an update to Apple’s free ebook reading app for the iPad, enabling users to read specially created enhanced ebooks containing rich multimedia elements and interactivity, along with gorgeous layouts. Apple is focusing the new capabilities of iBooks on the textbook world, where videos, interactive images, 3-D graphics, and embedded review questions can significantly enhance the learning experience.

These features enable zooming into the image of a chromosome to get a better look, for instance, or rotating a 3-D model of a molecule. Or, an interactive graphic might enable you to tap the parts of an insect’s body, highlighting them in other photos elsewhere on the screen. Switching orientations changes the display from a scrolling approach (portrait) to a page-based design (landscape) with multiple columns and in-text graphics. 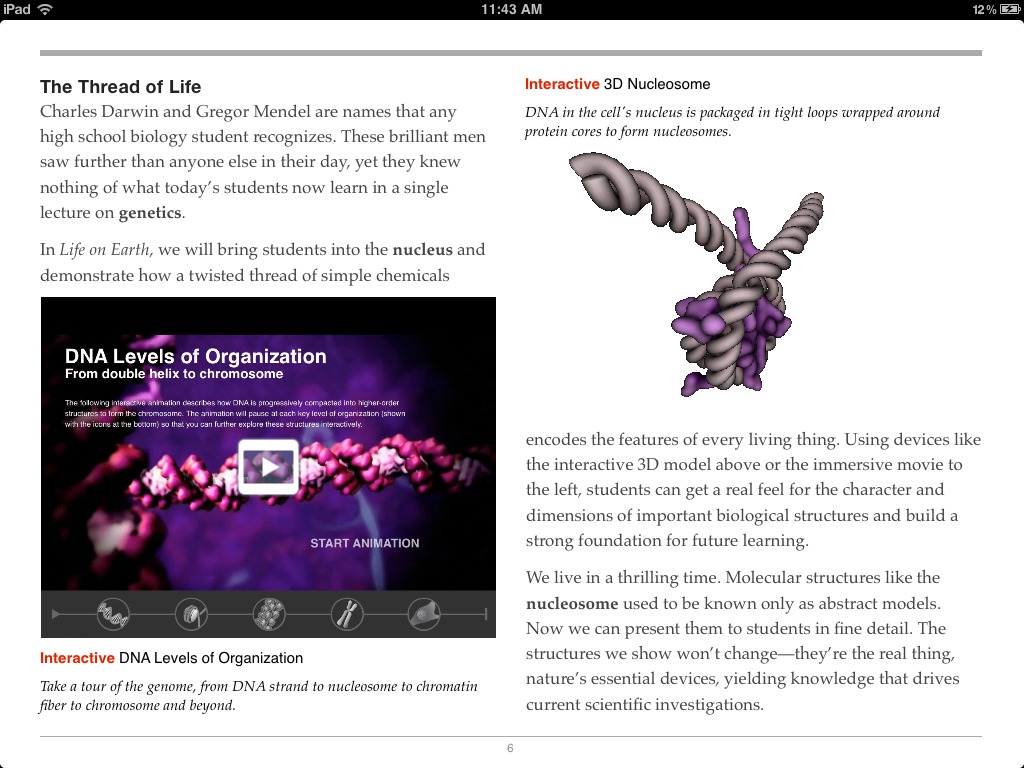 The iBooks textbooks that Apple showed off included a built-in glossary; you can browse through it or tap bolded words to look up their definitions in the glossary (which can even include images) or in a dictionary. Searching remains, of course, and is improved — when you tap a word, you can search for it in the textbook, in both text and media (presumably mediated by a search index), or extend the search to Wikipedia or the Web. If the textbook’s glossary includes the word, the glossary entry will also come up as a search
result. 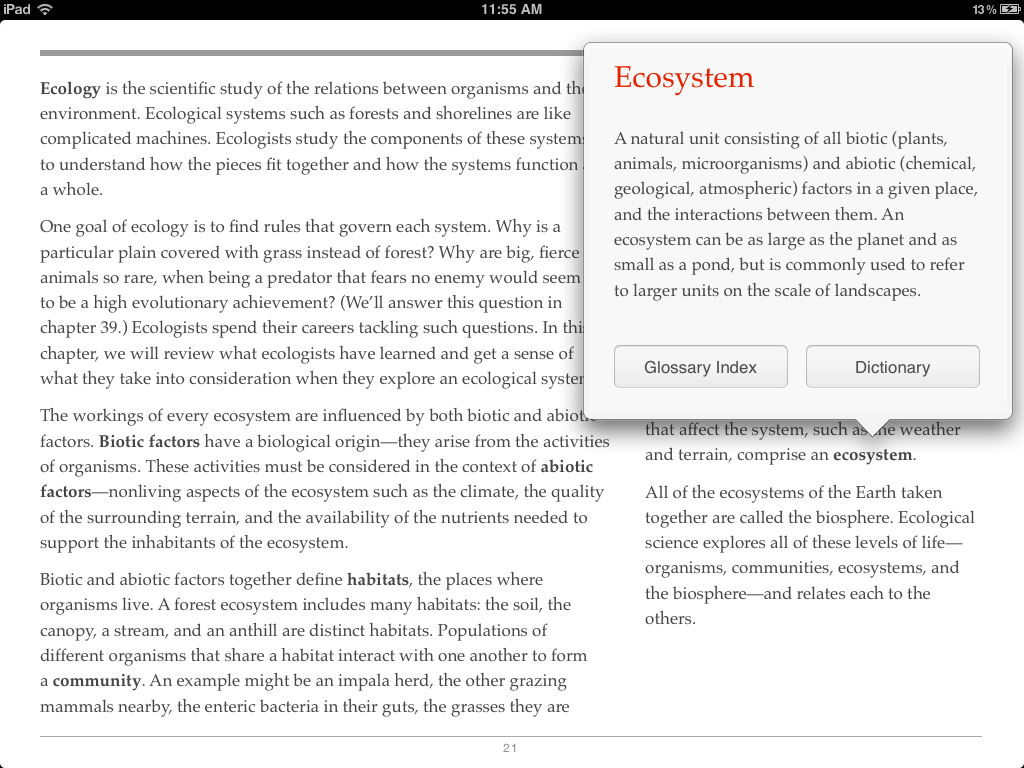 Another nut that Apple has apparently cracked is that of pagination — it’s important in a class for everyone to be literally on the same page, and these books have fixed pagination in landscape mode. You can’t change fonts or sizes in landscape mode, but those standard iBooks controls appear once again in portrait mode.

More interesting are iBooks 2’s new note-reviewing capabilities, which work only in iBooks textbooks. Just as with iBooks previously, you can tap and hold or swipe to highlight text, and then tap the highlighted text to add a note. But with an iBooks textbook, notes can be used in a study card format where you see the highlighted text on the “front” of a virtual index card and your note on the “back,” which you reach by tapping it. The stack of cards can even be shuffled to aid in studying for tests. 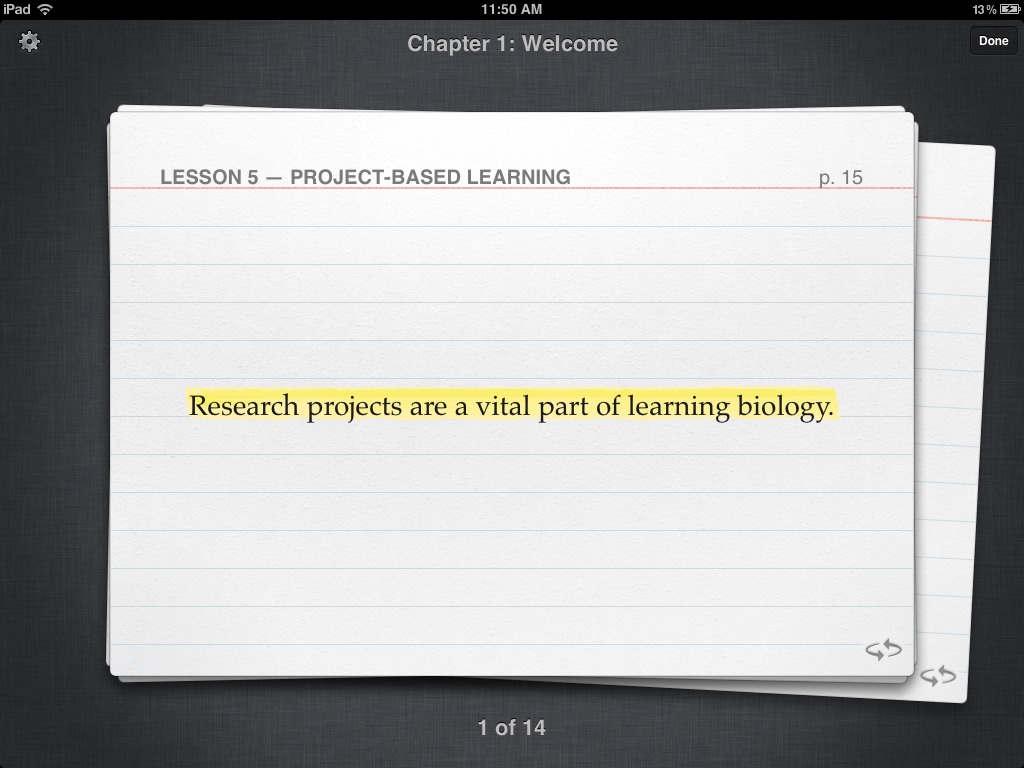 Although iBooks 2 remains a universal app that runs on all iOS devices, the iPhone and iPod touch versions cannot display these new iBooks textbooks (they don’t even appear, which is good, since they’re huge). Plus, several times when I tried to view the “Life on Earth” textbook in iBooks 2 on my original iPad, all I got was the introductory audio on a gray screen — I had to shut my iPad down and restart it before iBooks 2 would show the book properly. (“Life on Earth”
is currently available for free; it’s a nearly 1 GB download.)

iBooks Author — Previously, iBooks was relatively limited in what it could display, and adding audio and video to an EPUB was difficult at best. Creating iBooks textbooks is where the second new app — iBooks Author — comes in. It’s a Mac application, available for free from the Mac App Store as a 136 MB download, and compatible only with Mac OS X 10.7 Lion. (It turns out that iBooks Author can be run in 10.6 Snow Leopard, but doing so requires some trickery. Digital Tweaker has the details.)

Not surprisingly, iBooks Author is reminiscent of Apple’s iWork applications, providing a number of templates to start. As in Keynote, you add pages to your book, putting text, graphics, and multimedia elements on each. You can import text from Pages or Word, and iBooks Author honors a set of styles for creating items such as headings, sections, and so on. You can even import Keynote presentations as interactive elements. 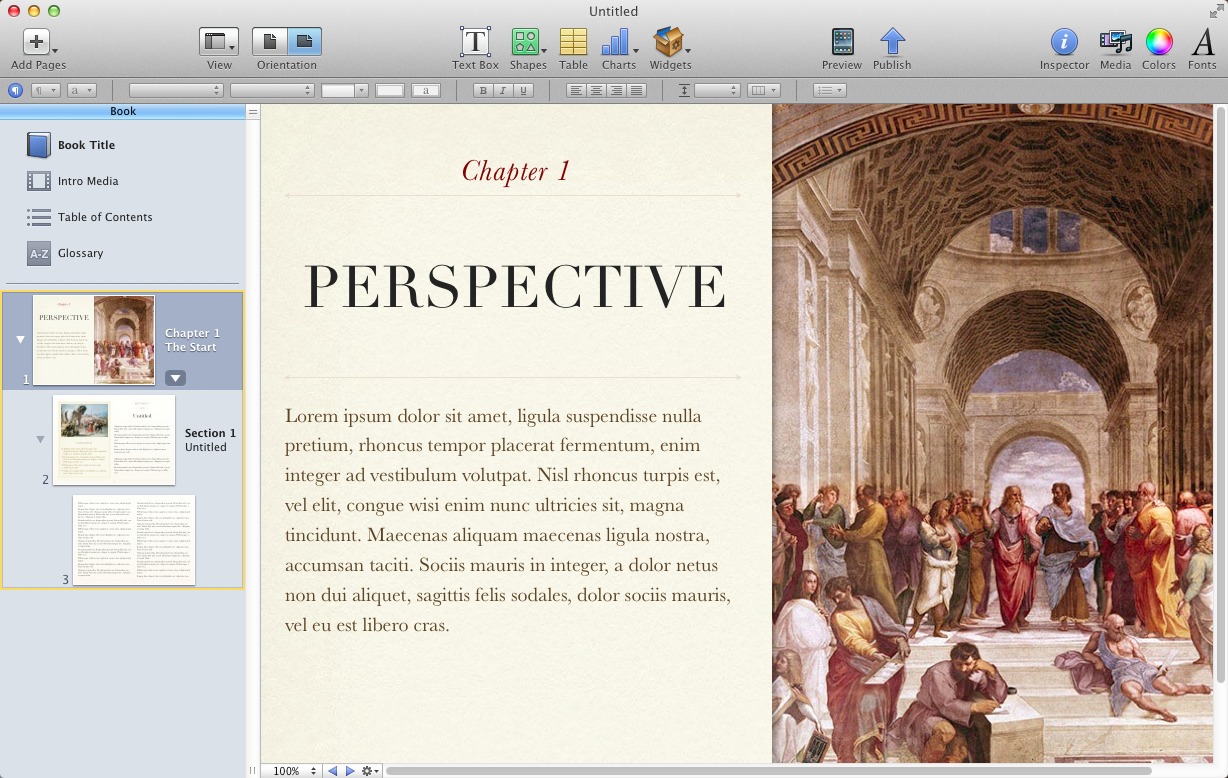 Like Pages, iBooks Author can build the table of contents automatically, based on styles that you use for headings in the manuscript, and you can create glossary entries from the Glossary toolbar or by Control-clicking a term and choosing from the contextual menu. Then you bounce over to the Glossary interface to enter a definition.

Unfortunately, iBooks Author doesn’t appear to have the change tracking and commenting tools that are necessary in any professional publishing situation, which means that text will have be pretty much final when it is flowed into iBooks Author, and any collaboration on layout and object placement will have to be done manually.

iBooks Author can export three types of files: text, PDF, and iBooks. The text export is likely good only for extracting text from an existing file, the PDF export appears to be useful only for a certain level of proofing, and the iBooks format is apparently slightly mangled EPUB, with a different MIME type (drop one on BBEdit if you want to look inside). You can export directly to a connected iPad for testing, which is far easier than the normal convoluted process for syncing ebooks to the iPad.

However, don’t get your hopes up for being able to use iBooks Author for EPUB in general — the license agreement states that files created with iBooks Author must either be made available for free or sold only through the iBookstore, and they will likely display only in iBooks on the iPad without some hacking. In short, if TidBITS wanted to create an enhanced Take Control ebook using iBooks Author, the only way for readers to purchase it would be through the iBookstore, which makes it much harder for us to communicate with readers and provide outside-the-book features as we do now. It would also make it harder for us to provide a similar ebook in other formats, such as one that can be read directly on the Mac or on the Kindle. I’m
not saying we won’t try iBooks Author, but it won’t be a sea change for our publishing model.

iTunes U — Apple’s third app — which requires iOS 5 and is available for not only the iPad but also the iPhone and iPod touch — does for online course content what iBooks 2 does for textbooks. Apple has long provided lectures from numerous colleges and universities in audio and video format via iTunes U, and with over 700 million downloads, it has been successful. The iTunes U app can play the simple audio and video for existing courses, but it gets far more interesting when used with a newly enhanced course (it also gets flakier — as with iBooks 2, I experienced a number of crashes; you can
expect minor updates to both apps as Apple works out the bugs). If you want a sample, check out Duke’s Core Concepts in Chemistry.

The iTunes U app breaks an enhanced course into four sections: Info, Posts, Notes, and Materials, and you switch between them using tabs on the right side of the screen (iPad) or bottom of the screen (iPhone/iPod touch). The Info tab provides subsections for things like a course overview, an instructor bio, and the outline of the course. 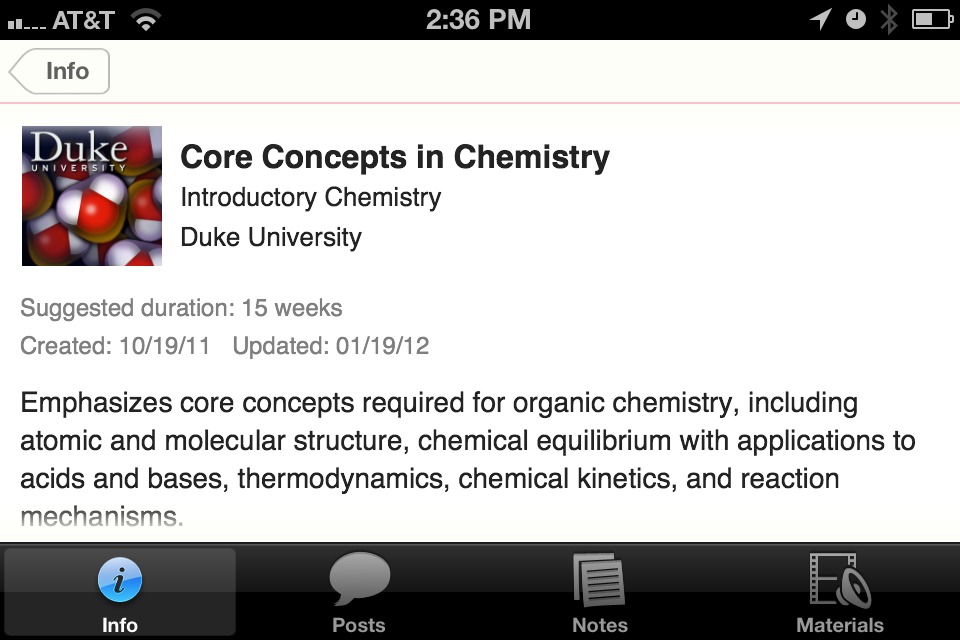 The heart of the course lies in the Posts tab, which brings together text, audio, and video lectures and assignments, along with the new iBooks textbooks created with iBooks Author (which can be read only on an iPad, remember). Although the Core Concepts in Chemistry course I looked at seemed fully fleshed out, for courses that are in progress, new posts alert you to their presence via notifications. You can even play an audio or video lecture and listen in the background while in a different part of the interface, such as the
Notes tab. When you complete an assignment, you can check it off. 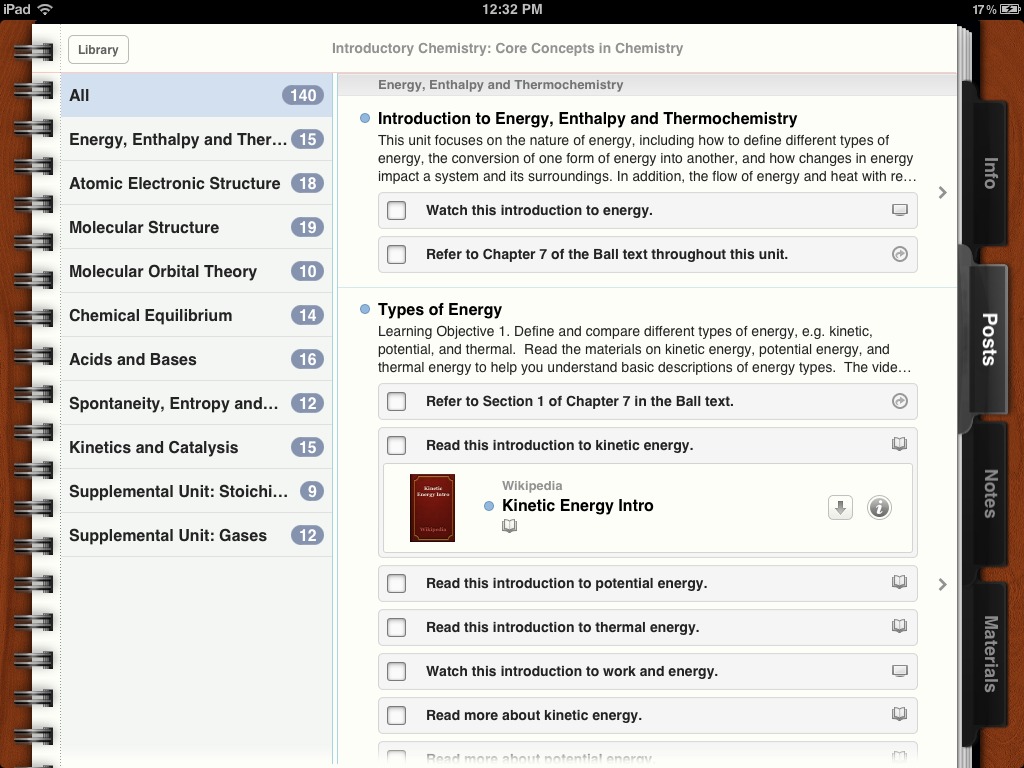 In the Notes tab, you can create general course-level notes, and any notes from iBooks that are part of the class will appear as well. (But remember, you can make notes only on EPUB-based ebooks; although iBooks can display PDFs, which will be common in courses, you can’t make notes on those.) Those books may appear within the assignments, and they’re all collected in the Materials tab as well. The course includes (or will download) all the core materials, but some supplemental materials, including books and apps, may require
additional purchases. 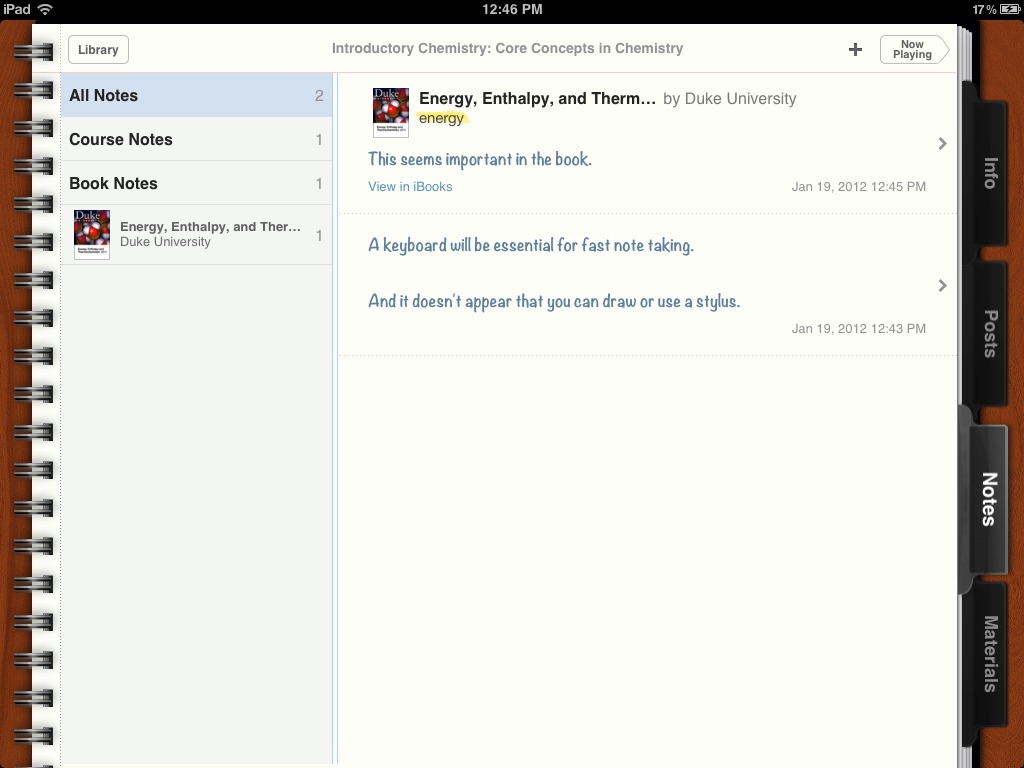 How one creates an iTunes U course was not shared, although Apple said that six schools have had access to the new tools and have created over 100 new online courses. We’d like to see Apple open up the tools necessary to create an iTunes U course, just like iBooks Author, such that it would be possible to create — and sell — training courses via iTunes, although that gets back into the single-store debate.

Ironically, the presence of all this information online may reduce attendance in classes even further, something we’ve heard professors in iTunes U lectures complain about with the ready availability of recorded lectures.

A more speculative question is what will happen — particularly in certain subjects where collaborative scenarios or access to specialized equipment aren’t important — to higher education in general if it becomes possible to take most courses online in this fashion. Will the intangibles of a college education — maturation, networking, exposure to opportunities — and the eventual diploma be seen as worth the skyrocketing tuition costs?

An Apple a Day for Education — I’ll give Apple this — they don’t think small. These apps set a new bar for electronic books and online courses, and the apps are all available for free. The problem is that Apple also wants to own the entire pie, and in the process say exactly what is and is not possible. That’s not particularly different from Amazon, which tries to lock works into the Kindle ecosystem by refusing to support EPUB. But at least the far-less-ambitious Kindle format can be converted to from other formats.

Debates are already raging on Twitter about how iBooks Author doesn’t allow works created with it to be sold anywhere but the iBookstore, and we publisher types are already trying to imagine how we can justify the extra effort and expense of creating iBooks textbooks for a single retail outlet. Plus, Apple is talking about these textbooks being inexpensive — on the order of $14.99 — which may play havoc with publisher business models that rely on high prices for books that are reused for multiple years. How it will shake out in the publishing world remains to be seen.

On the other side of the equation are the schools — where will the budget come from to outfit students with iPads and to buy these iBooks textbooks? It’s not impossible — we know of some local school districts that have had great success with pilot programs for tablets (Android, in this case), both in terms of student achievement and cost savings. But many schools can purchase only state- or district-approved textbooks, and that’s where Apple’s connection with publishers may be key — it should be much easier for a government entity to approve an electronic textbook if it is simply the electronic version of an approved traditional textbook.

Comments About Apple Goes Back to School with iBooks 2, iBooks Author, and iTunes U