Writing about booth babes, the skimpily or tightly dressed hired models (almost always women) who try to lure in trade-show attendees to learn more about a firm’s products and services, puts one into contortions. Can we write about the seemingly unnecessary titillation that such babes add to an event without also falling into the trap of promoting some kind of tease? Probably not. Note this photo by Jeff Carlson, for instance, which displays attractive women in close-fitting (and uncomfortable, one of them reported in the ladies’ room with Tonya Engst nearby) shiny purple jumpsuits, but also illustrates the extremely unpleasant marketing tactic of having a 2D bar code attached to these women’s backsides, and the company’s logo
appearing at their waists. Not subtle, that, but are we engaging in the same approach we’re deploring? 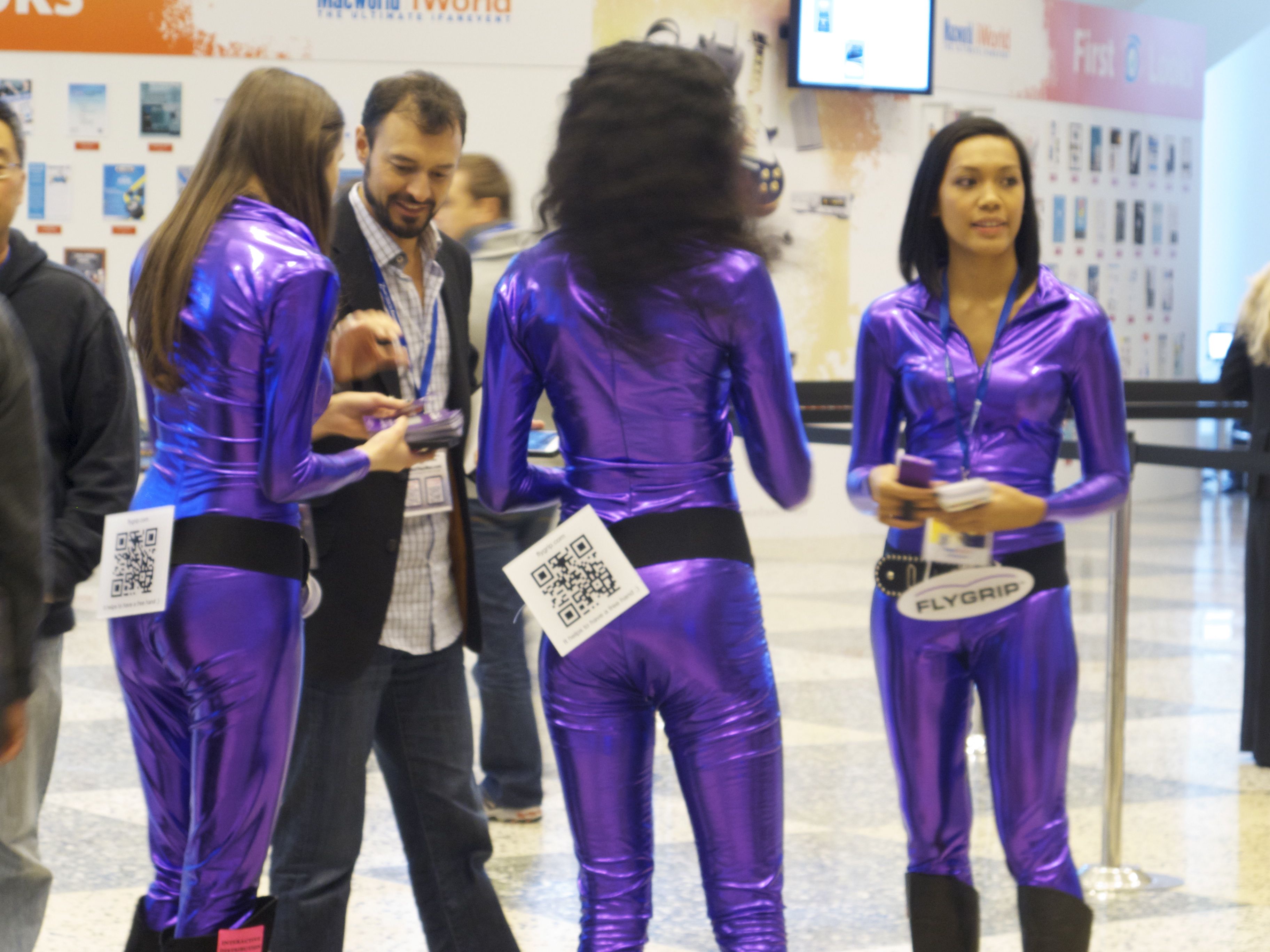 My intent here is to inform with a little provocation, and to create the same kind of cognitive dissonance many of us experienced in person as you see the pictures and then read the words. At the Economist’s Babbage blog, I wrote an account (“Silicon Implants”) of the bizarreness of seeing so much skin and tight clothing this year at Macworld | iWorld, which traditionally attracts a more even male/female ratio, and
not the sort of men who might consider CES or a boat show akin to a boys’ night on the town. This year was no different. As I counted informally, I saw a trade-show audience of roughly 60-40 in the favor of men, but more 50-50 across booth staff, excluding the leggy models.

Comments on my Economist piece are all over the place and instructive, whether they agree or not. My complaint isn’t that attractive people are trying to get me to pay attention to their products. Rather, my point is that companies that rely on models whose various assets are stress-testing spandex or exposed to air are trying so hard that they fail. Not all attention is good, since it highlights to women attending the show that these products are not for them, as well as driving off men who find being so blatantly manipulated distasteful.

Let’s be blunt. Dressing up women in such artificially sexy outfits sends the message that these women are available for sex. They are not. Nearly all men know this, although that apparently doesn’t stop some of the less socialized from asking. But for nearly all men, this is where the cognitive dissonance comes in, as the male hind brain (“Sex!”) fights it out with more-evolved neural pathways (“Cool industrial design!”). There were plenty of booths with good-looking, well-dressed women (and men!) that employed traditional marketing tactics of being appealing and inviting, listening to and answering questions knowledgeably, and behaving in a positive and upbeat manner. I gravitated there.

Traci Dauphin at Cult of Mac wrote an article in which she interviewed some of the models at the show and explained what it’s like to be living in their skins. It’s revealing, and useful insight. As I suspected, the booth babes (who naturally hate that term, forcing me to question whether I’m intentionally denigrating them by using it) are typically well compensated and treat a trade show gig like any other professional work. They know their job is to bring in attendees who might otherwise miss the product, to the benefit of the company that’s paying to use their faces and bodies. It is also no surprise that Traci’s
article about the models is chock full of tasteful photos of them, which will attract traffic to the piece.

It’s difficult to tease out the problem here. I’m not offended by the models making a living, nor am I suggesting that the IDG World Expo show management take action — setting a dress code that enforces how tight a dress can be worn (or how short skirts can be) would be pointless and provocative. It seems to me a matter of the vendors taking stock of whether or not the tactic is sufficiently effective to cancel out the negatives, and especially to determine if the attractive women serve as a repulsive force. Adam Engst told me that he steered clear of booths surrounded by these models purely on the basis of being made to feel uncomfortable and knowing they wouldn’t be able to answer his detailed questions.

I also present for your consideration the excellent work done by About-Face, a California-based non-profit whose goal is to teach girls and women how to resist the constant barrage of media messages that batter self esteem and body image. The group is run by Jennifer Berger, a long-time friend of TidBITS and a former Macworld editor.

[Update: I would also point to this post by Jessie Char, who staffed the Delicious Monster booth at Macworld Expo in 2009. She and two colleagues, all of them regular employees of the firm (which makes personal library management software), came up with and executed on the idea of the booth. They dressed attractively, showing a moderate amount of skin. They were also product experts. Jessie writes of the treatment they received at the show, where many assumed they were hired models. Jessie writes that she’s had to work to get out of the shadow of that booth ever since, which shows how using booth babes sets the wrong expectation for other
women at the show — however they dress. I’ve been citing Jessie et al. all week: it’s no crime to dress in an intentionally sexy fashion if that’s your choice and you’re part of the action. I would also point to the gymnasts and athletes at PolkAudio’s booth demonstrating sports earpieces on a trampoline. They had admirable physiques, but weren’t there for the ogling.]

As a man, at least at this point in our society’s development, I can never fully appreciate how women are continuously presented with images of perfection that they are covertly and overtly pressured to emulate. The models at Macworld | iWorld are just another component of that, presenting a contrast to the vendor’s professional staff and possibly driving away the women who attend the show. It’s distressing that we’ve gone backward in this respect from Macworld Expos of 5 or 10 years ago, when such models were few and far between. Perhaps that’s part of the price of attracting a younger and less-professional audience with iOS, but that doesn’t make the show floor any more welcoming.