The whirlwind of activity has subsided, and we’ve all returned home from Macworld | iWorld in San Francisco — Tonya and I to the snowy fields of Ithaca, Glenn and Jeff to the rains of Seattle, Joe to Paris (where I can imagine only food, not weather), and Michael to sunny Santa Monica. It was great to see all these people, with whom we communicate daily in email, iChat, Skype, and Twitter, in person for a change, along with other TidBITS contributors like Jeff Porten and Marshall Clow, Take Control authors and editors like Karen Anderson and Dan Frakes, and Jon Hersh, who creates all the covers for our Take Control ebooks.

I list out these folks to be blunt — the show floor, conference sessions, Macworld Live stage talks, art exhibits, and musical events are great, but the primary reason we go to Macworld Expo (I can’t bring myself to write out the accurate but awkward new name repeatedly) every year is to see people. Between co-workers, colleagues in the Apple media world, Mac and iOS developers, and TidBITS readers, Macworld Expo is for us a non-stop conversation. You may have noticed that I didn’t post to Twitter much last week, nor did we publish any articles during the week. That’s because there wasn’t a moment of downtime — we were on the go the entire time, checking out booths on the show floor, giving talks, having business meetings
with developers, planning future directions with staff, chatting with readers, and more.

After the first day, I always ask how the show is going, and I’m also always trying to gain an overall impression based on the floor traffic and how attendees react to booths and conferences. I was particularly curious if I’d see any differences from the last two years, which were marked by the absence of Apple.

So I’m pleased to report that if I had to describe Macworld Expo in a single word, it would be “confident.” The last two years had a mixture of hesitance — “Will a conference without Apple succeed?” — and defiance — “We’ll show Apple that we can have a conference without them!” That mix was gone this year, and apart from people unrelated to the Apple world with whom we talked during the trip, no one who was actually attending Macworld Expo even mentioned the fact that Apple wasn’t present. As I’ve said repeatedly, Apple’s absence from Macworld Expo is largely irrelevant. I’d even argue that it’s better for exhibitors, since Apple’s announcements tended to overshadow everything else that was being
shown.

On the Floor — The show floor itself was full and vibrant, with the exhibitor count increasing slightly from roughly 250 in 2010 and 260 in 2011 to about 270 this year. More important was that the mixture of vendors was better than in previous years. In the past, it was all too common to walk the aisles and mutter, “Another iPhone case vendor, check. More iPad cases, check.” This year, I found myself drawn to many of the booths because of clever twists or product enhancements.

For instance, Adonit showed both their Writer keyboard for the iPad and their Jot styluses, neither of which is a new concept. But the Writer keyboard and cover use magnets to provide an infinitely variable angle for the iPad and power down the keyboard when the case is closed. And instead of a thick foam blob, the Jot styluses use a clear plastic disk at the tip so you can see what you’re doing.

Time and time again, I’d look at a booth to figure out what was being shown, and realize that I had to stop and talk to learn more. For those of us who consider ourselves plugged in, it’s exciting to discover new things at Macworld Expo, and you can read about many of them in “Cool Products at Macworld | iWorld 2012” (30 January 2012).

I also had to recalibrate my long-standing habit of breezing past the big booths at the front of the hall — traditionally, the large companies there weren’t terribly interesting — but with The Omni Group and HyperShop smack in front (along with HP and Sennheiser), even those booths required attention.

On the downside, although IDG World Expo did a good job with arranging the show floor this year, with a better layout for the tiny kiosks for iOS app developers in particular, the new OS X Zone that held slightly larger kiosks for Mac developers was shunted so far off the edge of the hall that it was almost hard to find. I didn’t attempt to compare the raw number of Mac- versus iOS-related booths, but I found that I didn’t care — not only was the new name of the show promising both, but Mac OS X and iOS are equally important in our lives now.

Attendance numbers haven’t yet been released by IDG World Expo, although I’m guessing they’ll be in the 25,000 to 30,000 range. There were almost no lulls in traffic that I saw, with the aisles nearly always crowded. Most notable was the registration line on Saturday, when people who can’t take time off from work during the week can come to the show. When I went to a lunch meeting at noon, the line stretched through the Moscone West lobby and out the door. It was great to see so much interest.

Real and Virtual Worlds Collide — Although I personally found no time to post to Twitter while at the show, I was still using my iPhone frequently to take photos of booths I wanted to remember, check the time (I don’t wear a watch, though I’d still like to see Apple do something with a wrist-mounted iPhone), coordinate meetings via Messages, check locations of friends with Apple’s free Find My Friends app, and more.

Find My Friends was a pleasant surprise, since we haven’t previously had a chance to use it in any interesting situations. I occasionally check it to see where Tonya is on long bike rides, for instance, but since I seldom check until I think she should be home, it normally tells me that she’ll be arriving soon. We shared locations temporarily with everyone on the TidBITS staff and other friends with whom we were meeting, so it was both fun and helpful to see where people were, at least roughly. (Once, when I checked to see where Take Control author Karen Anderson was when we were expecting her for breakfast, I was a little disturbed to see her purple dot apparently playing in traffic.) If you get a chance to use Find My Friends with
other iPhone or iPad users at a widely distributed event, give it a try. 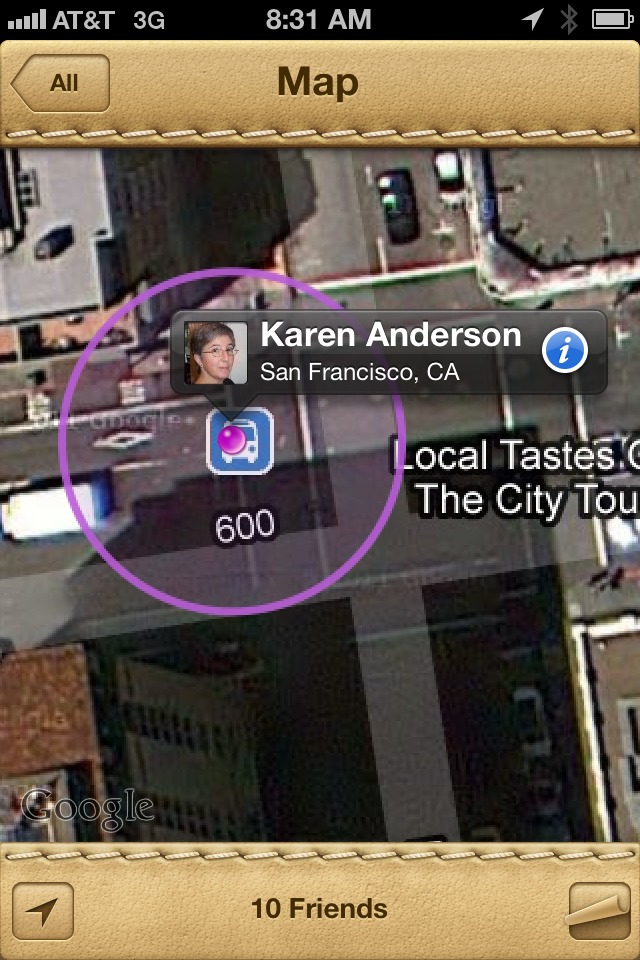 Less positive was the frequency with which iPhones drew people’s attention away from the event or people at hand. A number of times, I noticed people focusing so hard on their iPhones that I felt as though anything I said would be an intrusion. Just as with texting at family meals, I’m sure this is becoming increasingly common, and even accepted, among certain groups, but it’s a slippery slope that I don’t like. (And you kids should get off my lawn too!)

To be fair, I think this melding of the real and virtual worlds has been happening for some time, and with the iPhone, you’re seldom really offline. Couple that with the reduced friction to messaging offered by iOS 5’s new iMessage service and the notifications from apps like Boxcar, and it’s easy to see how the iPhone can become a murmuring devil in your pocket.

Although I tried to avoid being drawn away from whatever real-world group I was with during the show, there were certainly times when my iPhone would vibrate with a new incoming message about upcoming logistics and I was unable to check it as unobtrusively as I would have liked. It may be some years before it’s common, but I’m sure we’ll eventually have heads-up virtual displays built into glasses for reading incoming messages. How we’ll reply to those messages, I don’t know.

Now we’re home, where it makes sense to rely on our myriad virtual communication channels. That’s fine, but given how useful and enjoyable face-to-face meetings were, we’re already looking forward to the next Macworld | iWorld, scheduled for 31 January 2013 through 2 February 2013.

Inside TidBITS Opinion
Cookies & Privacy: We wish we were talking about chocolate-chip cookies here, but our Web site—like nearly all others—relies on a few minor digital cookies. Various laws around the world require us to tell you that fact, so consider yourself informed, if not nourished. By continuing to use this site, you agree to our use of these cookies. Cookie and Privacy Notice