Apple’s AirPort Utility is a hoary old beast, dating back to 1999 when it was called AirPort Admin Utility. In 2007, when Apple released its first 802.11n base stations, the “Admin” part of the name was retired, and a new, somewhat crisper, utility appeared. It still retained most of the characteristics of the original, though. The latest iteration, AirPort Utility 6.0 for Mac OS X Lion, is a distinct break from the past, picking up elements of the iOS version of the utility added in October 2011. (I wrote an exhaustive look at the iOS app for Macworld.)

The new AirPort Utility was released simultaneously with firmware upgrades for all 802.11n Wi-Fi base stations: the AirPort Extreme, Time Capsule, and AirPort Express. The firmware adds iCloud support, discussed below, and “fixes an issue with wireless performance.” But AirPort Utility 6.0 also cuts off the past. The new version works only in Mac OS X 10.7 Lion and cannot configure pre-2007 802.11g Wi-Fi hardware. However, Apple continues to make older versions of AirPort Utility available, as I explain below.

Instead of telling you how every last feature now works in version 6.0, let me walk you through things I know everyone will like, changes that some of you won’t (especially if you use a mix of 802.11g and 802.11n hardware), and some particular callouts for network administrators who are already turning amber in distress. I have not yet tried to set up a base station from scratch to see what the new assistants look like for walking you through the process, step by step, and that may offer more to like or dislike.

(And, yes, my “Take Control of Your 802.11n AirPort Network” book will need to be updated to include the iOS app and reflect what’s in AirPort Utility 6.0. However, because the 5.5.3 version of AirPort Utility remains available and still works fine, I recommend keeping a copy of that handy, both to use my tome and to access features that have disappeared in 6.0. See below for where to download previous releases.)

What You Will Like — AirPort Utility 6.0 for Lion opens with a graphical bang: a visual depiction of your network (its topology), including the hierarchical relationship among parts. If you have, as I do, a base station that’s plugged into a broadband modem and that then serves up NAT addresses via DHCP to other base stations on the network, those other base stations are shown below the main one. 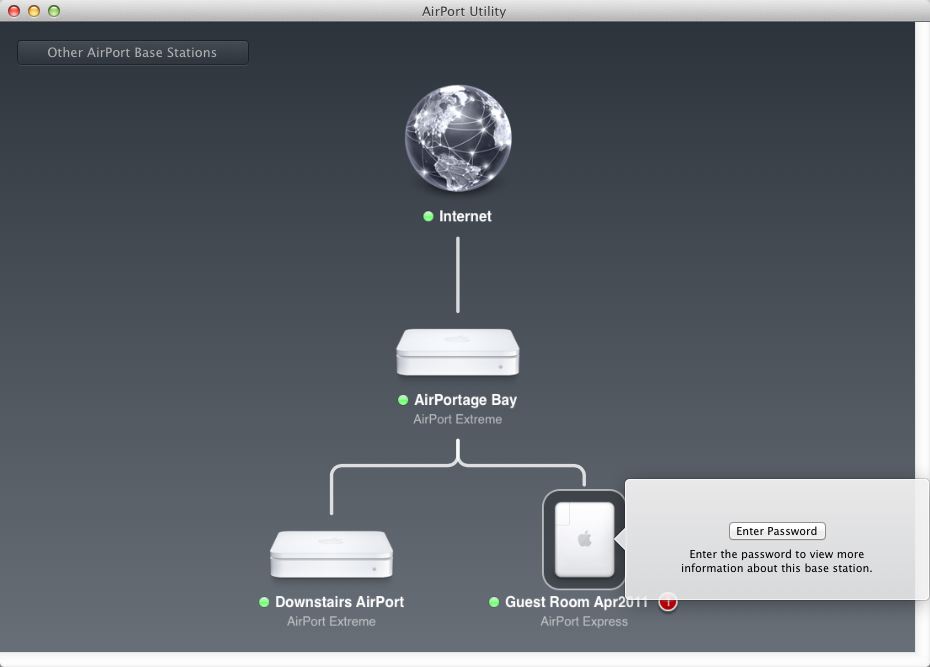 Some graphical details appear only after you select and log into base stations, and AirPort Utility reads configuration details that let it figure out how the various pieces are connected.

This visual layout is also functional: click any element and you get a popover (as shown in the figure) with details about the part. For the Internet, you see the router’s address, DNS server information, and the default domain name. The green, amber, or red status dots next to base stations or the Internet let you see any problems at a glance, too.

Base station information is much more accessible here, too. Click a base station, and AirPort Utility 6.0 shows the obligatory IP information, but also gives you the serial number, errors (including those you’ve opted to ignore), and a list of connected wireless clients showing their Bonjour names. Hover over the base station’s name and it reveals the MAC (Media Access Control) addresses for each of the wired and wireless interfaces. Hover over a client’s name, and all the current connection information (such as the
raw data rate) pops up.

Click Edit, and a multi-tabbed modal sheet appears that’s similar to the previous version of AirPort Utility. The tabs are somewhat reorganized. If you want the old style stand-alone window, Option-click the Edit button for a base station, and a non-modal dialog appears.

You may like, for most network purposes, the simplicity of version 6. It looks to me as though Apple has pruned at least half of the options available in nested dialog boxes and elsewhere. (You may also hate it for this reason.) For average users, having fewer choices with better presentation is a plus. For network admins and advanced users, you’ll be cursing Apple as you download the previous version. 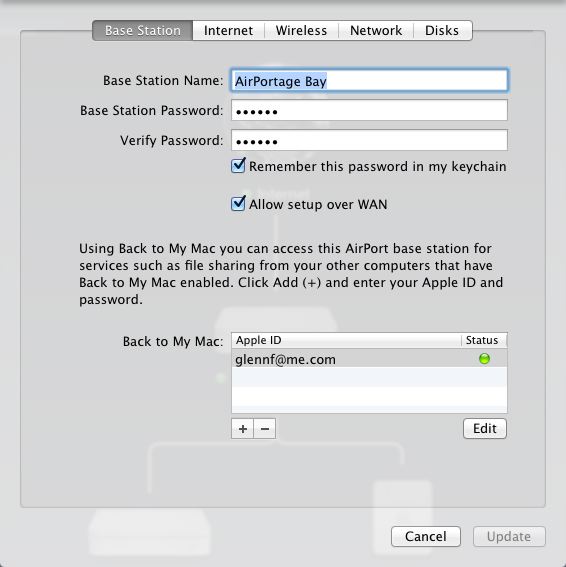 The change includes a Network tab that has all the various local networking elements formerly spread out on one page: DHCP and NAT settings, DHCP Reservations, NAT Port Mapping Protocol, and Port Mapping features, along with the options for Timed Access Control.

Apple has hidden little bits of information and functionality all over. Just when I think a feature is gone, it pops up elsewhere. For instance, an earlier version of this article stated that you could no longer roll back a base station to a previous firmware release. Not true! Option-click the firmware version number in the base station information pop-out, and the rollback choices are available. 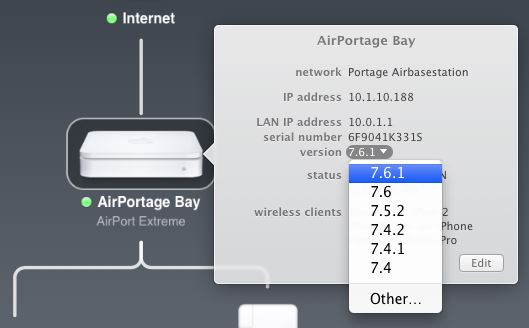 The new version finally adds support for remote access over Back to My Mac using Apple IDs created with or migrated to iCloud. This allows configuration of a base station tunneled through a secure connection between your computer and the base station, and likewise access to any attached hard drives or an internal Time Capsule drive. (To use MobileMe accounts, you must use the older 5.x software.)

Because you can still configure base stations with the latest firmware using older versions of AirPort Utility, the lack of older base station support in AirPort Utility 6.0 and its elimination of static WDS options affects you only if you’re trying to mix 802.11g and 802.11n base stations.

What Network Administrators Really Won’t Like — If you use any Apple Wi-Fi gear in a corporate, academic, or enterprise setup, you’re going to be mad. See the Apple Support Communities AirPort forum for how mad other admins are.

Remember, these features aren’t gone from the AirPort hardware, they just can’t be configured from AirPort Utility 6.0. You’ll want either version 5.5.3 or 5.6 to access such features.

What’s to Come? — These significant changes point to one of two conclusions. Apple is either entirely abandoning the managed network market, which already was dubious about how hard it was to manage and configure AirPort base stations from a central location, or it has an update coming for its AirPort Management Utility, which has been out of date for years. That utility, like the iPhone Configuration Utility (misnamed, as it works with all iOS devices), exposed otherwise unavailable settings and allowed many base stations to be configured from a single profile.

If Apple’s plan is to provide management tools, it’s an odd choice to not have the tool ready with this release of firmware and AirPort Utility 6.0. But keeping the old 5.x software available for the time being may indicate that AirPort Utility will eventually encompass everything that’s needed.