Starting 16 February 2012, Apple has made available a developer preview of OS X 10.8 Mountain Lion, announcing plans to release the new operating system version this summer (or winter, for our friends in the Southern hemisphere), and dropping the word “Mac” from the name in the process.

This upgrade from 10.7 Lion to 10.8 Mountain Lion isn’t meant to be a major overhaul like the one we saw moving from 10.6 Snow Leopard to 10.7 Lion. The core user experience remains largely the same, with a series of enhancements that build on the changes made in Lion. Since Mountain Lion is only in pre-release you shouldn’t take this article as a review. Not all of the features were enabled on the demonstration system provided to me by Apple, and much is likely to change before it’s released to the public.

Living in the iCloud — Mountain Lion unifies the experience between iOS and the Mac while still maintaining those differences that are important to each platform. Notably, iCloud becomes the glue of the Apple ecosystem, playing a stronger role than we’ve seen before. For example, the first time you set up a user account, Mountain Lion prompts you for iCloud credentials and loads all your information and even Mac App Store purchases (unless you use a different Apple ID for iCloud and the Mac App Store). In a nice return to the days of MobileMe, you can even synchronize your Mail, Contacts, and
Calendar accounts if they have been configured on another Mountain Lion-using Mac connected to your iCloud account. (Oh, and iCal and Address Book have been renamed to match iOS, so they’re now Calendars and Contacts.)

iCloud’s Documents in the Cloud service gains several enhancements. For example, in a demo by Apple, I saw that as you edit a document on an iOS device, the updates are pushed immediately to a Mac version of the document even if it’s open in the Mac application. And, Mountain Lion debuts a new Document Library where you can choose between iCloud documents and local files.

Mountain Lion also brings over more features from iOS, while tuning them to work better with a desktop operating system. While this includes some apps, the more-important changes are three new system-wide features: Notifications, Share Sheets, and Twitter. 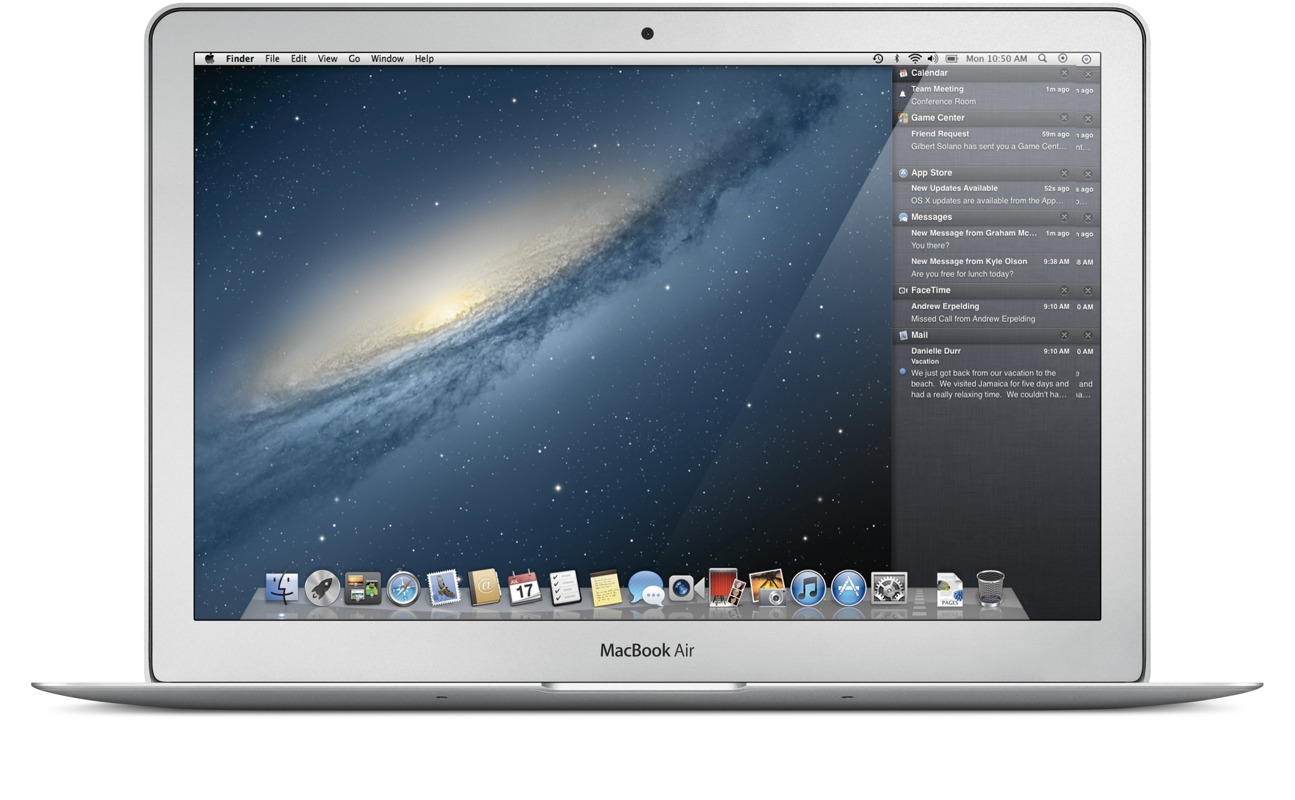 To see your notifications, you use a two-finger swipe from the edge of a trackpad or click the small notification icon located on the far right of the menu bar. Your Desktop slides a bit to the left to show a column of notifications in exactly the same style as the iOS Notification Center. It’s an extremely intuitive action and nice for glancing at things like new email messages or calendar appointments.

Since Apple Mail is likely to be a heavy pusher of notifications, it gains a new Favorites mark so you can pick which contacts’ messages trigger notifications. This is also used in Share Sheets, discussed below.

As with most of the features I discuss in this article, Apple is supporting notifications with a new API for developers, so that developers can integrate notifications into their own programs.

Share Sheets — Share Sheets adds a new button to supporting apps to “send” the current item to another application. This feature functions like the “Open In” feature in iOS, enabling you to share content directly between applications without cutting and pasting. (It’s kind of a simplified Services menu item, and will hopefully see more use than Services.)

Share Sheets focuses on photos, videos, links, and documents, and it enables you to share to other applications and online services, and even send files directly to AirDrop. Share Sheets are context-aware, so if you are sharing a note, you can send it to Mail or Messages, but not to iPhoto. For files in the Finder, you can share directly from Quick Look windows. And if you are on a Web page you can, with a few clicks, share the full page in an email message, or as a link in Twitter.

See a Web page you like? You no longer need to cut and paste into your favorite Twitter application, but can instead send it directly from Safari. There’s also integration with your contacts (though I have yet to figure out how that works). When you create a new tweet, an input window pops up in whatever application you are in (instead of switching to a Twitter app), and you can choose to reveal your location down to the city level. 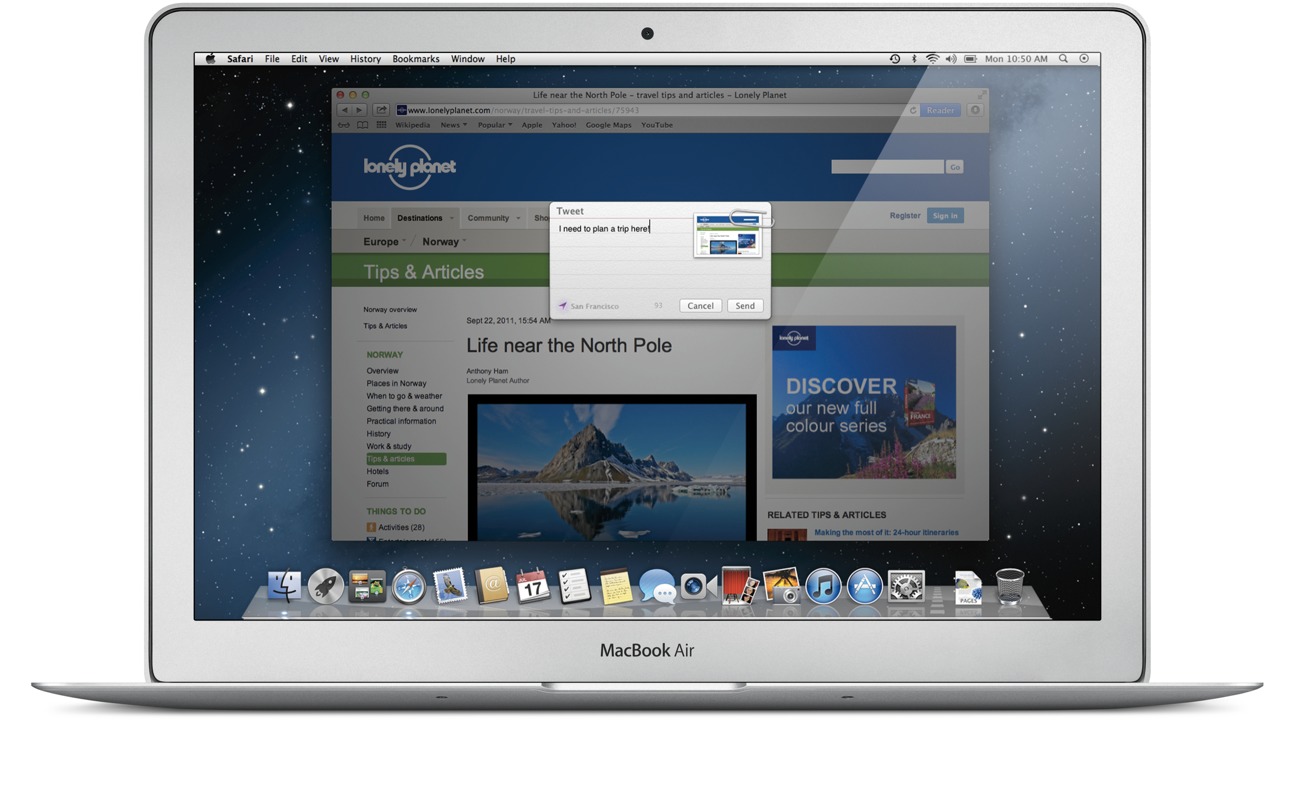 Safari steals a cue from Google Chrome and finally moves to a single address bar for search and Web addresses. Typing into the address bar will either take you to an address or run a search on the search engine of your choice. When I migrated my user account from my regular Mac, it retained Bing as my preferred engine.

Notes and Reminders — Two iOS apps, Notes and Reminders, make their Mac debut. Notes replaces Stickies and is fully iCloud-compatible. Aside from keeping your notes in sync across different devices, Notes on the Mac supports more formatting, embedded images, and even file attachments. Since Stickies is gone, you can now “pin” a note to the Desktop. And yes, you can choose any font you want. 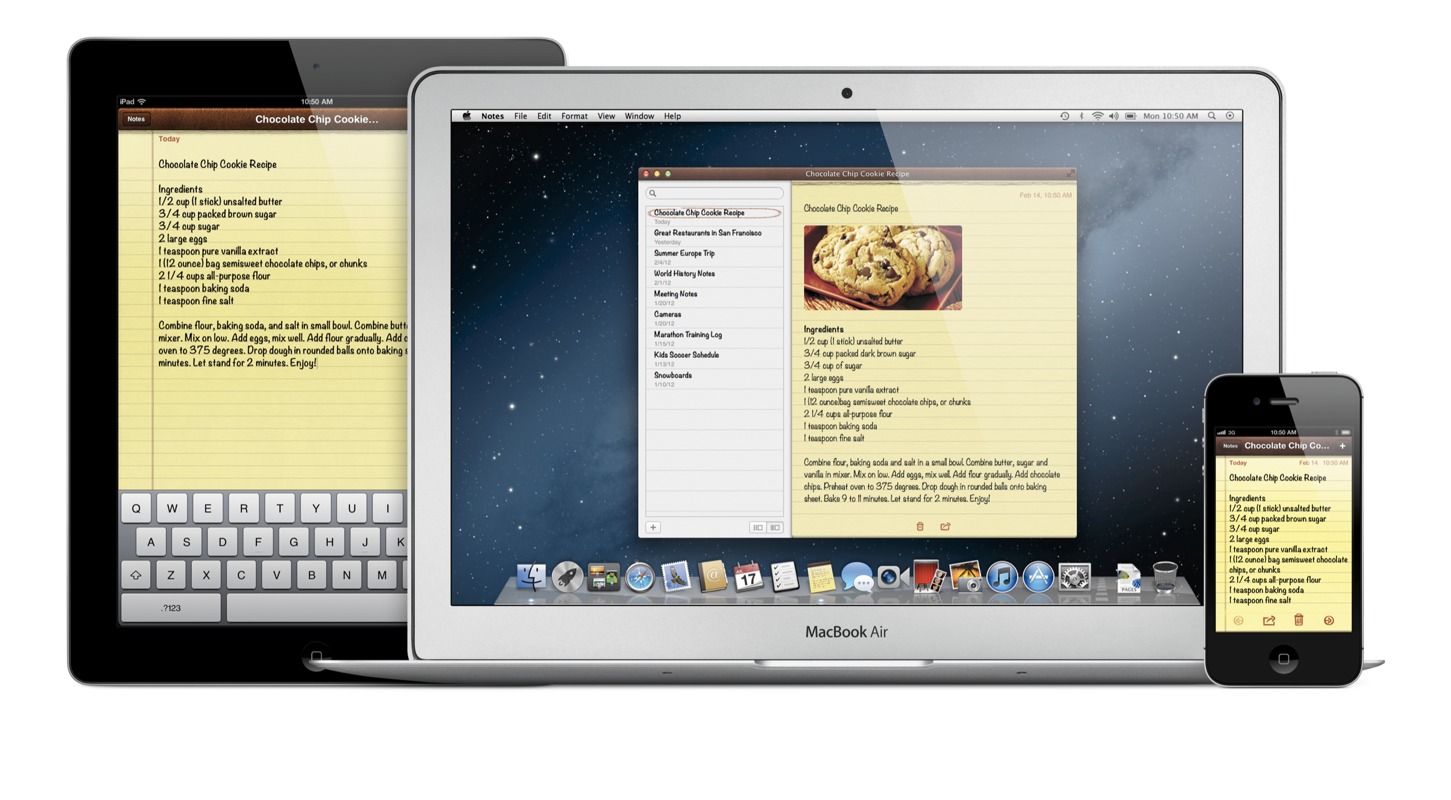 Since Notes on iOS doesn’t yet support this additional formatting, Apple “translates” the notes so they look appropriate on the smaller device. When I added an image, Notes didn’t display it on my iPhone, but I did see an icon that indicated there was an attachment.

Reminders also comes to the Mac and maintains nearly the same features as on iOS, minus location-based reminders. Both Notes and Reminders can work with CalDAV to support services other than iCloud. 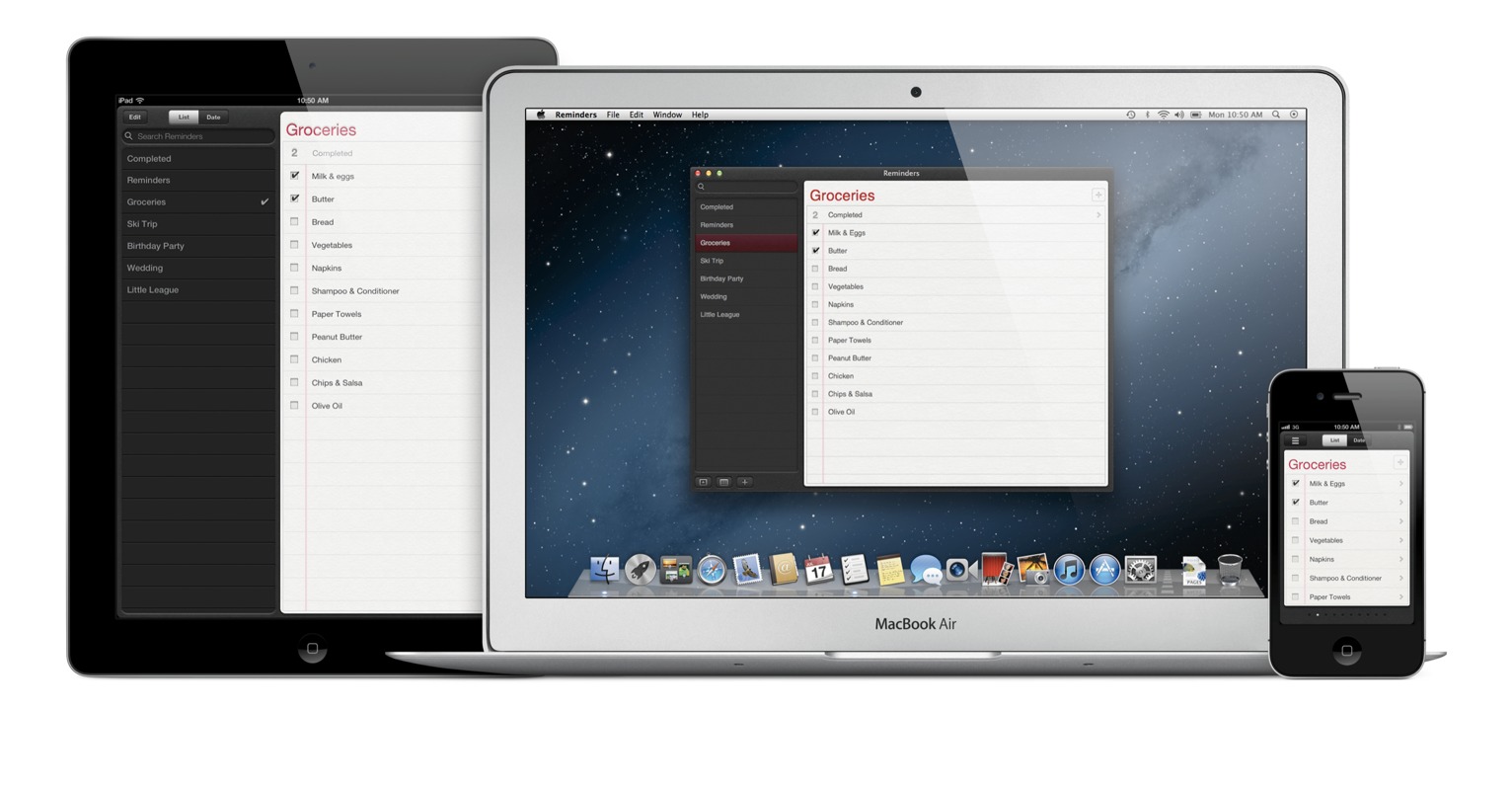 Unified Messaging — Goodbye iChat, hello Messages! According to Apple, over 100 million Messages users have sent 26 billion messages using iMessage on iOS. Messages completely overhauls iChat and unifies it with the FaceTime video chat app and the Messages text messaging app on iOS. And Messages is now available in beta for Lion users.

Aside from the visual improvements, Messages now completely supports iMessage messages on the Mac. This is unified with your other devices, so if someone sends a message to any of your iMessage email addresses, it will appear on all devices at once. Messages sent directly to your phone number, and not to an email address, appear only on your iPhone. You can send any attachment up to 100 MB, including video. All messages are encrypted from end-to-end. 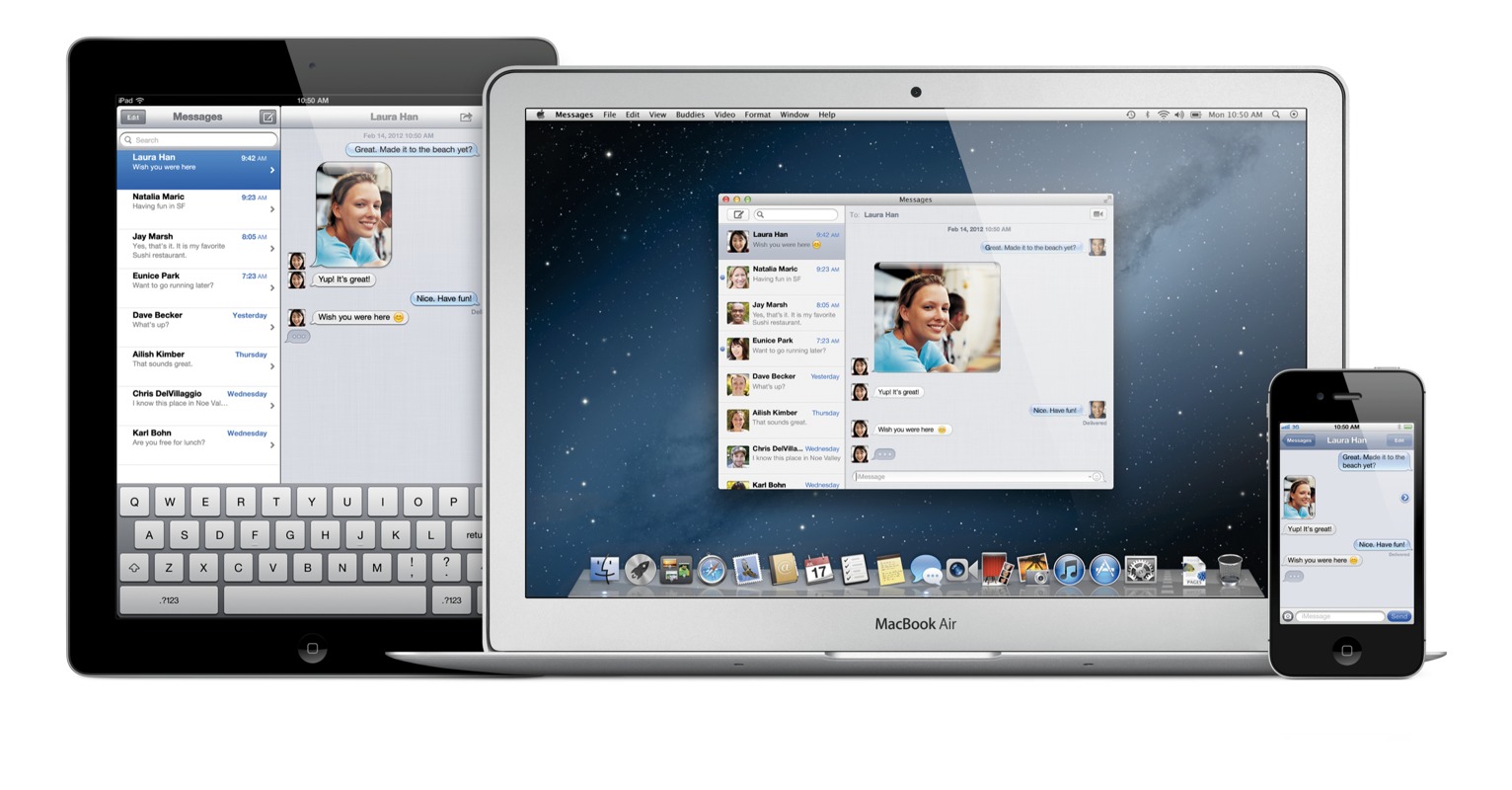 Messages also supports group messaging, plus all the features of iChat. I was a bit worried that Screen Sharing would be gone (since that’s the only way I can keep certain family members online), but fortunately it’s still there.

Of all the changes, Messages hammered home to me the power of bouncing between devices without having to think about it. In one day, I tested it across my iPhone, iPad, and Mac, all without caring what was on or off, which app was open or closed. I merely moved from device to device while maintaining a continual conversation. It doesn’t matter if someone is on an iPhone or a Mac — I can message them, FaceTime them, and exchange files. That’s just a small example of the power of the cloud.

Gaming Gets a Power Up — One of the most compelling demonstrations during Apple’s briefing was watching a head-to-head real-time race in Real Racing 2, with one user on a Mac, the other on an iPad, and the Mac streaming to a high-definition television. 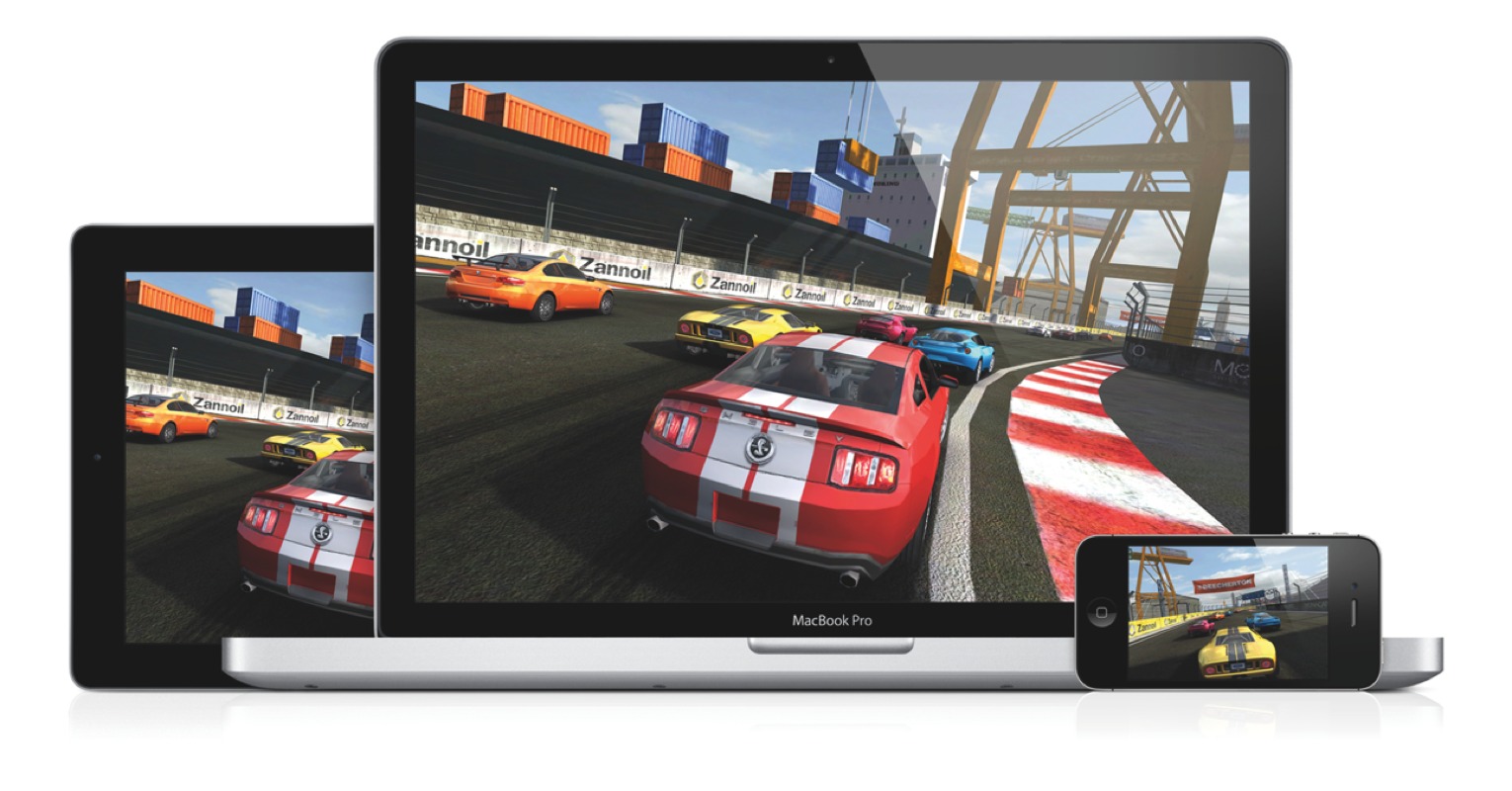 Mountain Lion brings the iOS Game Center to the Mac. Aside from its social features, like finding friends and leaderboards, Game Center adds voice chat, status synchronization, notifications, and cross-platform multiplayer gaming. If your game supports it, you can hop off your iPhone and onto your Mac and pick up right where you left off. 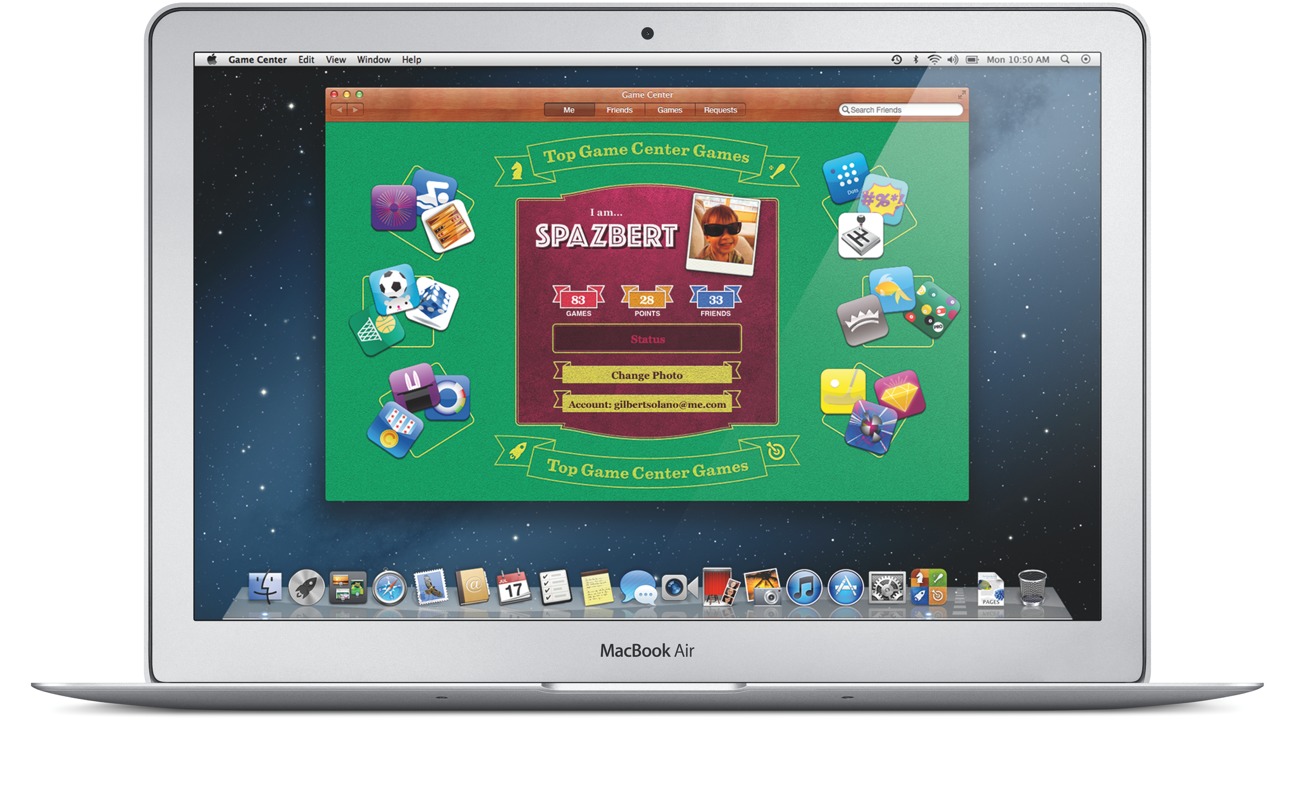 As a professional speaker, I find AirPlay Mirroring from a Mac to a TV interesting, but I would rather send from my iOS device to my Mac, which I would then connect to a conference projector. Then I could wander the stage while writing notes and drawing diagrams from the iPad onto the big screen.

Gatekeeper — Gatekeeper is a significant advance in the history of Mac security. Admittedly, I’m somewhat biased since security is my day job.

Nothing can prevent malware from being written, but Gatekeeper should ensure that we never see a Mac malware epidemic. It limits the kind of downloaded applications that will run on your Mac. It’s an extension of the File Quarantine feature first introduced in 10.5 Leopard, and it enables you to limit applications to those that come from the Mac App Store, or a combination of the Mac App Store and identified developers who sign their applications with a digital certificate issued by Apple. For Mac users who want to avoid Trojan horses and other malicious downloads, Gatekeeper is a compelling security option. I’ve written a detailed description of Gatekeeper in “Gatekeeper Slams
the Door on Mac Malware Epidemics” (16 February 2012).

The Future is the (i)Cloud — Although a lot of the early coverage of Mountain Lion will focus on the influence of iOS on OS X, the real story is the growing role of iCloud. iCloud is the glue holding the Apple ecosystem together. Increasingly, Mac users’ settings, data, and communications are stored and managed in iCloud. In “The Future Is Disposable” (24 June 2011), I wrote:

Many vendors offer tools to host files and backups in the cloud, but Apple is taking iCloud in a totally different direction. Within Apple’s ecosystem the cloud becomes the center of everything — your apps, your data, and your settings. It won’t be done by file synchronization that extends our current model of computing, but by baking the concept of cloud access into everything we do at a fundamental level. Our devices finally become tools, not roach motels where the bits check in, but never check out.

If Apple pulls this off it will be one of the most ambitious leaps in the history of consumer technology. Just as the Mac changed desktop computing, the iPod changed the way we listen to music, and the iPhone transformed the mobile phone into something from science fiction, the overlap of iCloud, Lion, and iOS could change everything we know about personal computing.

Mountain Lion is the clearest indication yet that Apple shares this vision. If they succeed, how we use our computers, tablets, phones, and perhaps even televisions will never be the same.