Some rumors do turn out to be true, and this week we’ll see which others become fact as well. 7 March 2012 was the date bandied about online for a media event announcing the third generation of the iPad. Apple sent invitations to media outlets last week beckoning them to the Yerba Buena Center for the Arts in San Francisco.

Apple’s invitations are usually teases for what to expect, and although the iPad isn’t specifically mentioned, it’s clear that the iPad 3 (or perhaps an iPad 2S?) will be the star of the show: a finger is tapping an iPad screen above the text, “We have something you really have to see. And touch.” (Apple also enjoys encoding its images; the visible app icons include the Calendar, with its icon set to Wednesday the 7th; Keynote, since it’s a presentation; and Maps, to indicate a location, although the Maps icon sticks to the default of pinpointing Apple’s headquarters in Cupertino.) 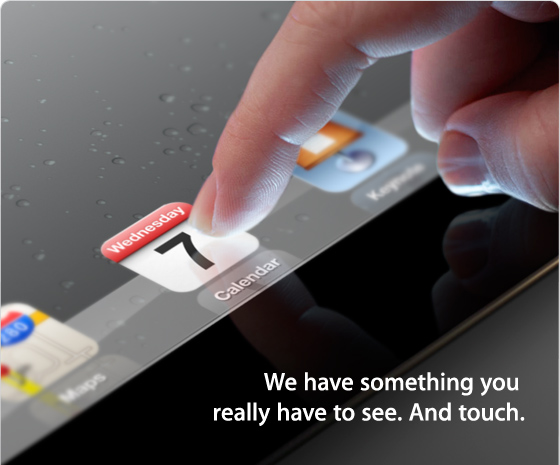 We could speculate about the upcoming iPad’s features, but really, what’s the point when we’ll know the real details so soon? I’ll be at the event and the TidBITS staff will be following along with other live coverage so we can provide details here. (And if you want to get a sense of what it’s like to attend an Apple media event, see my report from the first iPad announcement at “Photo Tour of Apple’s iPad Introduction,” 29 January 2010.)