When Apple first introduced Keynote for the iPad, I thought it was a neat proof of concept. But I had a hard time getting around the disconnect of using a handheld tablet as a presentation device, unless you’re presenting to two people next to you.

Fast-forward two years. (Yes, it has been only two years since the iPad’s introduction.) When I gave a talk about iMovie for iOS at the San Francisco Apple Store during Macworld | iWorld in January, I did it entirely from my iPad 2 using the Keynote and iMovie apps; the iPad was connected via cables and a VGA Adapter to the store’s audio-visual system. (Actually, that’s not completely correct: I ended up setting my 15-inch MacBook Pro on the lectern just to read my session notes, because I forgot to print them out prior to the presentation.)

That event was still fairly low-tech in the sense that a VGA connection is ancient history compared with the capability, introduced in iOS 5 for the iPad 2 and iPhone 4S, to mirror the screen to an Apple TV using Apple’s AirPlay technology. The VGA cable was easiest for the Apple Store staff to set up, but I could just as easily have carried the iPad untethered if an Apple TV had been available; that’s how I rehearsed at home.

But outside of the living room, I’m guessing you won’t find an Apple TV in most settings (although I’ve read reports that the combination of an iPad and an Apple TV is making inroads into the classroom). What has been missing from this scenario is the capability to share the iPad (or iPhone 4S) screen on a Mac.

Now that limitation has crumbled with the release of Reflection, a $14.99 Mac OS X app that makes an iPad 2 — and presumably the next iPad model being introduced this week — or iPhone 4S see the Mac as an AirPlay destination. Older iOS devices lack the necessary hardware for mirroring. (Another application, AirServer 4.0, reportedly also mirrors an iOS device’s display on a Mac, but I haven’t tried it yet.)

From the standpoint of someone creating the content to be presented, having the iPad’s screen on a Mac offers a few advantages:

How It Works — Reflection runs as a regular app under Mac OS X, and once you launch it, you may forget it’s there. The rest of the setup is similarly easy.

On the iPad 2 or iPhone 4S, enable AirPlay mirroring: Double-press the Home button to reveal the row of recent apps, swipe left to right to display the playback controls (on the iPhone 4S, you need to swipe twice), and tap the AirPlay button. Your computer will show up as an AirPlay-capable receiver. Select it, and then tap the Mirroring switch to On.

On your Mac, Reflection displays the iOS device’s screen in a device-specific frame. You can get rid of the frame by choosing Device > Show Frame (Command-B) if you find it as distracting as I do. 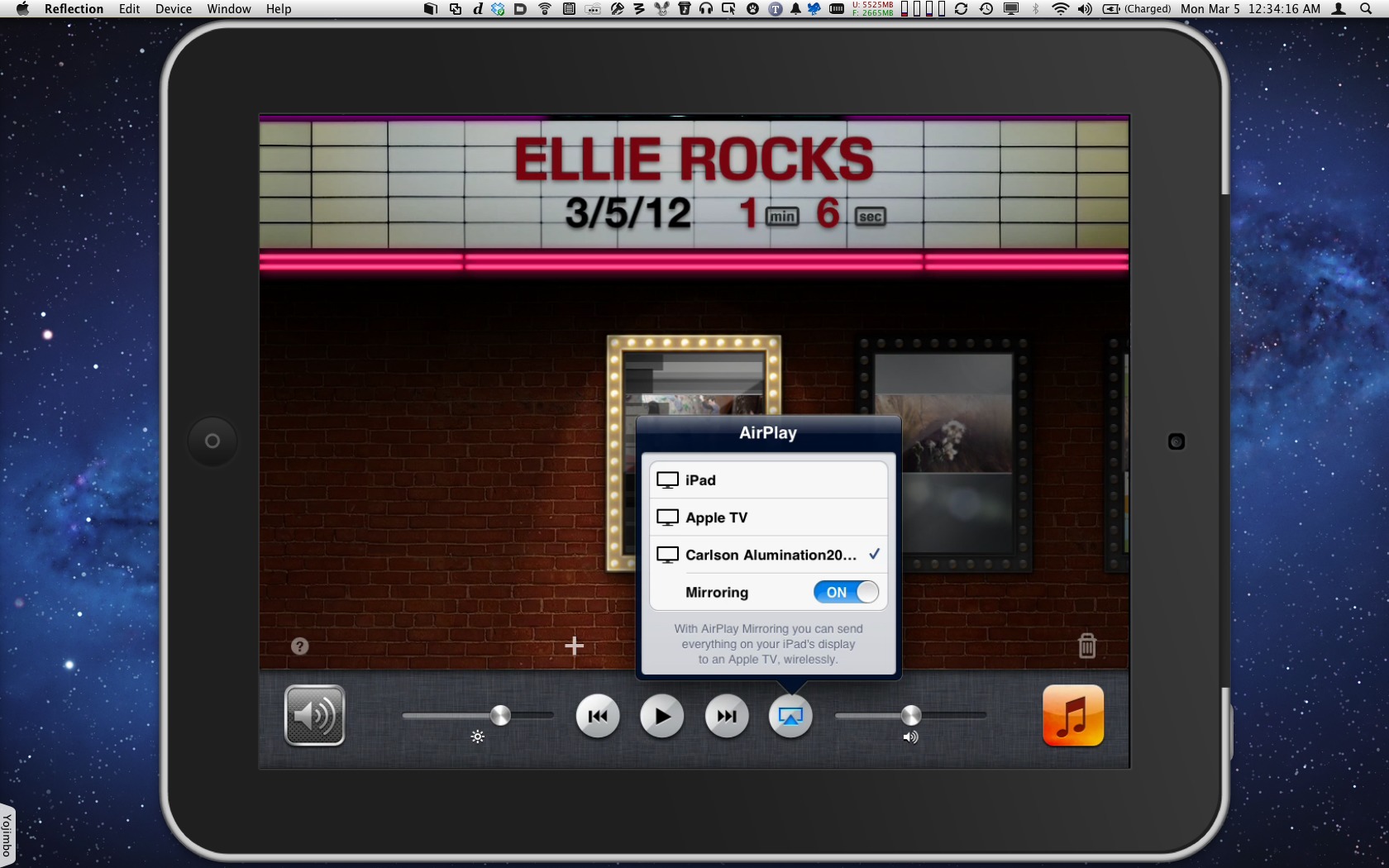 Other options include forcing landscape or portrait orientation, switching to Full Screen mode (where Reflection runs in its own desktop space), and setting a password to allow the connection (so not just anyone can display their device on your Mac).

Reflection also includes options for “optimizing” the resolution, which means Reflection forces the incoming screen into a set image size rather than zooming to the full screen size. However, it doesn’t stay true to those specs: Connecting my iPhone 4S with the option to optimize for “Retina iPhone (640×960)” gives me a window sized at 685 by 1027 pixels. The iPad 2, when set for “iPad (1024×768)” presents a screen that’s just a hair larger than that at 1052 by 790 pixels.

You can also optimize for “Any Device (1280×720)” or for “Hi-Res (1920×1080),” but those aren’t honored either; Reflection really wants to zoom the screen as large as your Mac’s monitor will allow. That’s fine, to a point — if you’re giving a presentation, you probably want the largest possible version for your audience. But as an author and video producer, I’d like to see an option to force a pixel-accurate resolution. Resizing makes everything a little fuzzy due to anti-aliasing.

Still, that’s not a deal breaker for my main interest: capturing the screen. With Reflection displaying the live contents of your iPad or iPhone, use the screen-recording features of applications such as QuickTime Player, Snapz Pro X, or ScreenFlow. I created a short example in Snapz Pro X of getting video while working in iMovie for iOS.

In general, the response isn’t bad. There’s a slight lag between what you do on the device and what appears on the Mac, but I didn’t notice dropped frames or other performance degradations in normal use.

Where I did occasionally run into spotty performance was playing video content, such as from the Videos app. In that situation, mirroring stops, and Reflection hands the video off to QuickTime Player, which sometimes couldn’t buffer the video fast enough to keep up. However, at other times I had no problem, so I can’t rule out other traffic on my network, such as a local CrashPlan backup of my wife’s laptop downstairs. (Oddly, when viewing movie trailers using Apple’s Trailers app, the video wasn’t passed along to QuickTime Player. Movie trailers exhibited the same video playback controls as usual, but Reflection stayed in its mirrored state.)

Games that can use AirPlay for output, such as Real Racing 2 HD, didn’t display the correct aspect ratio. (If you don’t own an HDTV, being able to use the iPad as a game controller to play a game like that on a 27-inch iMac would be a lot of fun.) I also noticed that changing the iPad volume didn’t affect the volume coming from Reflection on the Mac, although I suspect that’s by design so you don’t have warring volume levels. Still, it would be nice if you’re already controlling the device and running something like GarageBand to adjust the volume in the app, instead of manipulating it separately on the Mac. 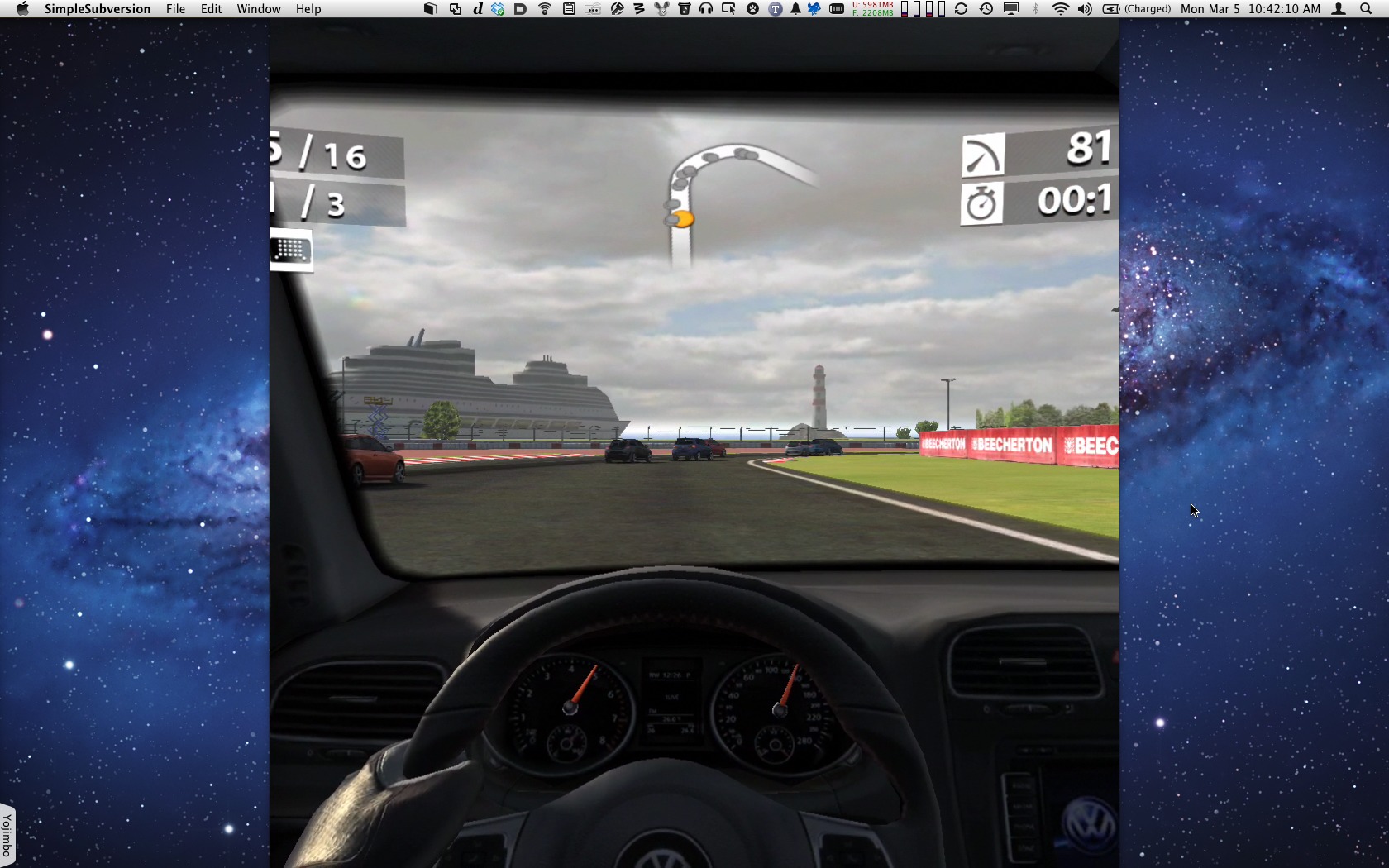 I’d like to see one key feature added: a gesture indicator, so you can see where the iPad user’s fingers make contact with the screen. When doing my iMovie presentation, the audience couldn’t see what I was tapping: I had to vocalize my motions to make sure everyone’s attention was at the appropriate control (“Now I’ll tap the Project Settings button, the one with the gear icon in the upper-right corner”). Having a circle appear for a speaker’s finger touch, for example, would make the interaction immediately
apparent.

Overall, though, Reflection is a good 1.x release that makes AirPlay even more useful to me. As I said earlier, it costs $14.99, or $49.99 for five licenses, and a trial version that shuts off after 10 minutes is available as a free download.

But now I have a new problem: looking at my Mac’s screen and wondering why my mouse isn’t controlling the iPad. Perhaps that, too, will come in time.

Comments About Reflection Mirrors iOS Devices on the Mac