With an email message to users of iWork.com last week, Apple has finally admitted that the collaboration service — which never made it out of public beta in the three years since its release in January 2009 — is pointless. At least that’s my reading of the email message; Apple’s marketing take on iWork.com is that it’s no longer necessary given that iWork applications can share documents via iCloud. 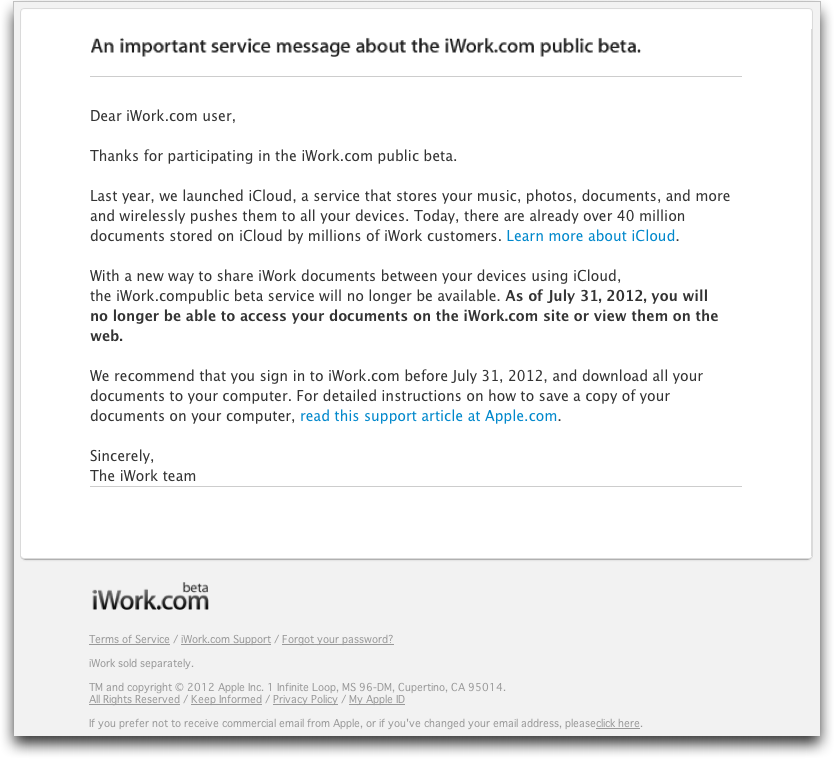 Apple said that you will be able to access any documents you might have uploaded to iWork.com through 31 July 2012, after which all those documents will become entirely inaccessible. Apple provides instructions for downloading copies of those documents to your Mac.

This is no great loss — for most people, no loss at all. iWork.com was little more than a slightly souped-up file sharing service. It offered no innovation beyond what was possible with services like Google Docs and Dropbox when it shipped in January 2009, and a September 2009 update made only the most minor of changes (see “iWork.com Enhanced, Does Anyone Care?,” 30 September 2009).

What about Apple’s claim that iCloud replaces iWork.com? It’s total spin, since iCloud’s Documents in the Cloud feature, as it stands today, is completely different from what iWork.com attempted to do. Documents in the Cloud enables you to share documents between your own devices, and only within specific apps. Worse, until Apple updates the iWork suite on the Mac — Keynote, Pages, and Numbers — the only connection between the iOS and Mac versions of those programs is via a Web browser.

There’s nothing wrong with Documents in the Cloud, as long as you see it as a virtual syncing cable and not as a collaborative work tool. iWork.com, weak as it was, at least tried to provide collaboration features in the form of Web-based manual file sharing, comments on shared iWork documents, and an ongoing chat-style discussion. Documents in the Cloud offers none of those features.

Put bluntly, Apple has never understood how to support collaboration, and technologies like iCloud and sandboxing seem to be headed in the opposite direction.

Comments About Apple Finally Puts iWork.com Out of Its Misery