If you’re using Dropbox and would like to increase your amount of storage for free, Dropbox is giving out up to 3 GB of additional storage space for people who are willing to beta test the new Camera Upload feature in the desktop Dropbox application. The Camera Upload feature is a bit like iCloud’s Photo Stream, and works with Mac, Windows, and Android versions of the Dropbox software.

For the desktop versions of Dropbox, the Camera Upload feature automatically transfers photos and videos from any camera or iOS device to a new Camera Uploads folder in your Dropbox folder, displaying a dialog for each device that you connect and offering the option to upload automatically in the future. Click the Start Import button and Dropbox copies all the photos and videos locally, then starts uploading them to the Dropbox site for synchronizing with your other devices. A new View Progress menu command in the Dropbox menu displays a progress dialog so you can track the import. Once the files are imported they’ll be renamed with the date and time the picture was taken. Copied photos
and videos are not removed from the camera, but they won’t be uploaded again even if you rename them or move them out of the Camera Uploads folder. 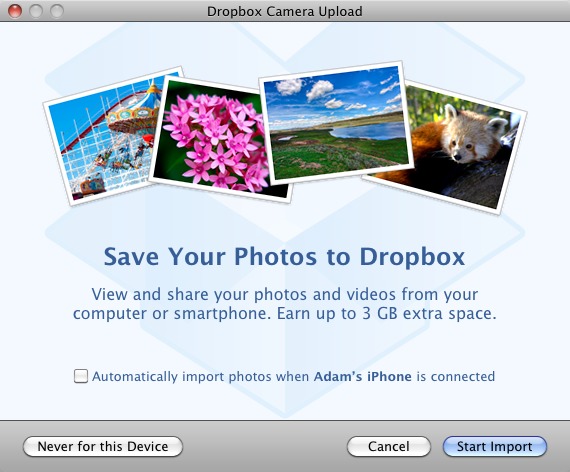 For the first photo you upload, Dropbox will credit your account with an extra 500 MB of storage space, and every subsequent 500 MB you transfer via the Camera Upload feature will add another 500 MB, up to a total of 3 GB. (Check how much space you have before you start uploading, so you will know when
you’ve gotten the full 3 GB. You can also check the Dropbox Events page to see if Dropbox has credited your account with the extra storage.) You can delete the photos and videos after they’ve been uploaded, but the extra storage space is permanent. Only files uploaded via the Camera Upload feature count; Dropbox says you can’t just copy a large file into that folder. Luckily, it’s easy to take a bunch of quick photos and videos to hit the limit — it’s not as though Dropbox cares about the quality. Note that your account won’t reflect the additional space until all the photos have been uploaded, which might take some time (I’m watching a 313 MB movie upload right now, with an
estimated 3 hours to go).

To participate in the beta, all you need to do is install the latest Experimental Forum Build of the desktop Dropbox application and start uploading photos; as of this writing, you can get version 1.3.27 for Mac OS X, though that will likely change soon. [Update: The beta is now at 1.3.30; be sure to go through the link above to get to whatever the latest version is. -Adam] Dropbox hasn’t said how much longer the beta will last (it has been going on for about a month), so it may be worth acting with some alacrity.

Although I haven’t seen any problems with the Camera Upload feature or the beta version of Dropbox, if you’re hesitant about using a beta of such an essential tool, you can still get 250 MB of bonus space for each friend you refer to Dropbox. (And if you’re not currently using Dropbox but want to sign up for a free account, feel free to use my referral link!)

Comments About Get More Storage for Testing Dropbox Camera Uploads