Now that all of Apple’s current iOS devices contain decent cameras, people are shooting and storing hundreds or even thousands of photos on their devices. Getting the images off an iPad, iPhone, or iPod touch, though, can be tricky.

Should you import everything into iPhoto or another photo management application? That works when your device is connected via a sync cable, but with Wi-Fi syncing enabled it may be rare to plug directly into the computer. And regardless, it’s fussy to have to plug in every time you want to transfer a photo.

Maybe the key is to use iCloud’s Photo Stream feature to push images to your various devices and computers automatically? Photo Stream is a great feature, but it gives you little control over which images are shared.

There’s also the question of moving images in the other direction: What if you want to copy photos to an iPad, but the computer to which the iPad normally syncs isn’t available?

What’s needed is a utility that transfers images back and forth between a Mac and an iOS device, with little hassle. For the last several months, as I’ve worked on several projects that have required a lot of iPad imagery, I’ve saved a huge amount of time by using PhotoSync, a $1.99 iOS app that works hand-in-hand with a free Mac client.

The Screenshots that Litter the Stream — I may be unusual in this respect, but my iOS devices are jammed full of screenshots. Granted, I write about technology for a living; I recently finished one iPad book (“The iPad for Photographers”); and I’m wrapping up another (“The iPad Pocket Guide, Third Edition”). So, I’m capturing a lot of screens. But I also need to get those images from my iPhone and iPad to my Mac, with as little friction as possible. I’m sure that there are plenty of people in similar situations with
other types of images.

I thought iCloud’s Photo Stream would be the answer, and it almost is. Any image saved to the Camera Roll — which is where screenshots end up — is automatically added to the Photo Stream. Within a few seconds or minutes, that image appears on other devices where Photo Stream is enabled. The copying happens automatically in the background.

But once the file is magically transported to my Mac, like Mike Teavee zooming along the ceiling as millions of colorful atoms, it’s still trapped within iPhoto or Aperture. (Fortunately, unlike the TV-obsessed tyke from “Charlie and the Chocolate Factory,” the image doesn’t arrive downsized.) I still need to export it out of the application, which is a non-starter for an efficient workflow.

In the past, I would connect the iPad to my Mac using the sync cable, and then fire up the Image Capture application included with Mac OS X. With that approach, I could copy selected files to a folder in the Finder, bypassing iPhoto entirely. This still works, but isn’t as convenient as PhotoSync.

Instead, here’s what I do with PhotoSync. After taking some screenshots (by pressing the Home button and the Sleep button at the same time), I launch the PhotoSync app, which displays the contents of the Camera Roll. (You also can navigate to any album on the device.) Images that have not been synced appear outlined in light blue. 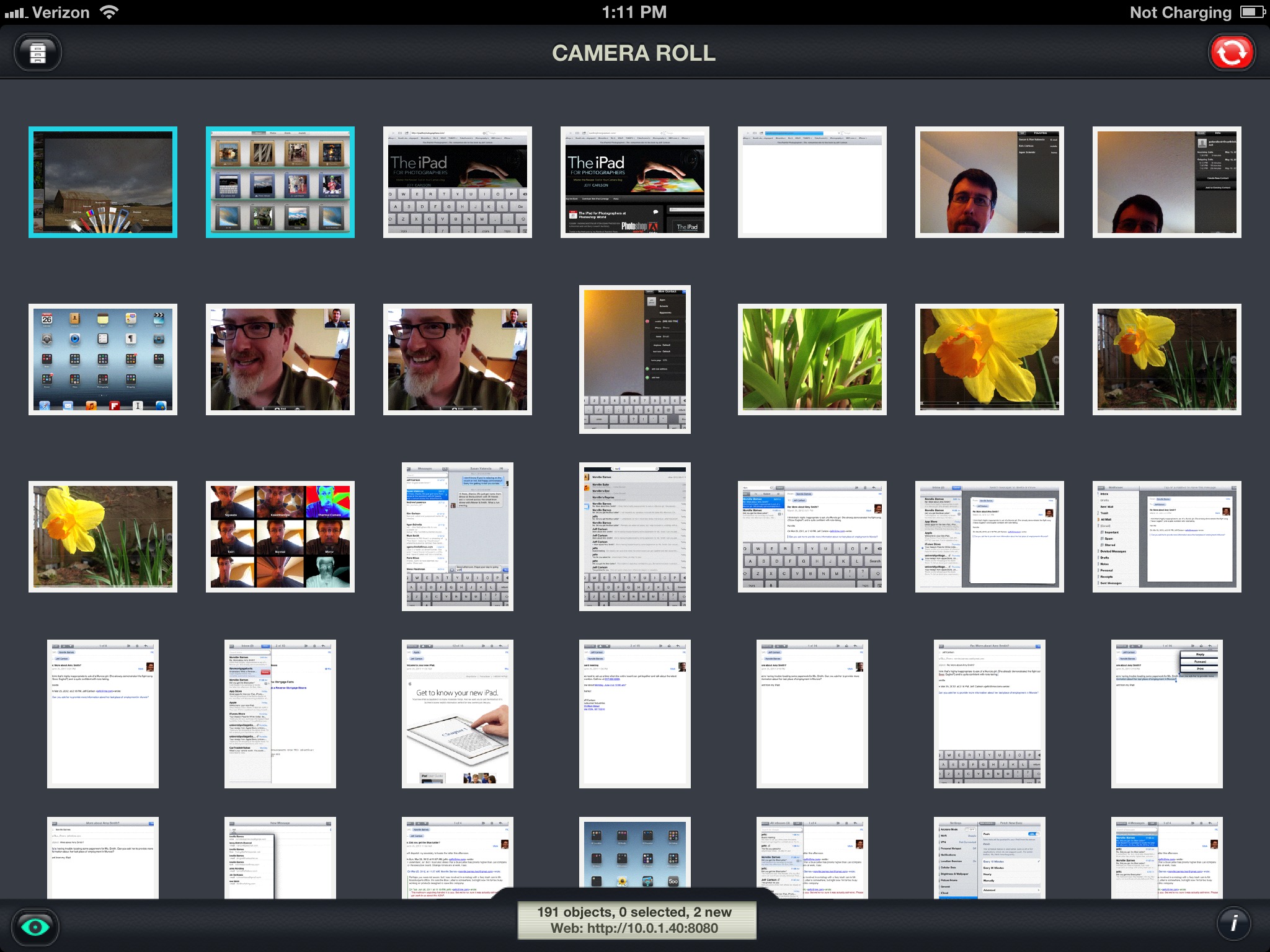 I select the photos I want to sync by tapping them, which adds a red checkmark icon. Sometimes it can be difficult to tell from thumbnails alone which images I want to sync, so PhotoSync also offers a Quicklook mode (tap the eyeball button) to view each photo full screen. In that case, the checkmark button appears in the lower-right corner for me to tap to select the image.

(Here’s a tip: Double-tap a thumbnail to enter PhotoSync’s range selection mode, and then tap another thumbnail: all images between those two are selected. You can do the same by double-tapping a selected image to deselect a range.)

When I’m ready to transfer the files, I tap the red Sync button in the top-right corner of the screen. This brings up the Select Action popover, providing the option to Sync New, Sync Selected, or Sync All images. I can also mark everything as synced, or switch to the Receive Photos/Videos mode (which I’ll explain shortly). 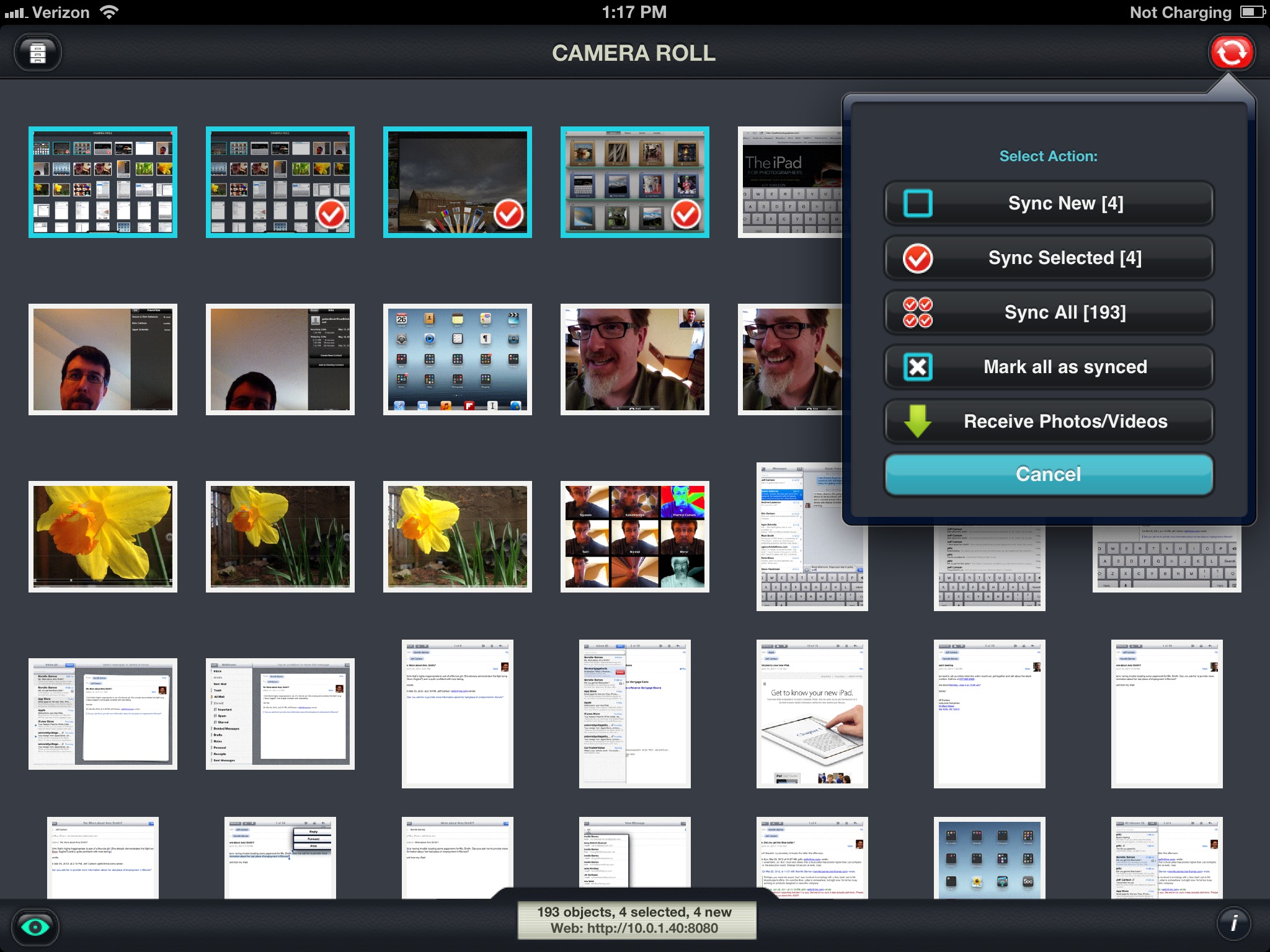 Next, the app asks where the files should go. In my case, I want the files sent directly to my Mac, so I tap Computer. (To make this work, I had previously installed the free PhotoSync Companion utility on my Mac. A Windows version is also available.) After I tap the name of my Mac, the files transfer via Wi-Fi and appear in the Finder. The PhotoSync Companion preferences let you specify where the files end up, either a Finder folder or imported
directly into iPhoto or Aperture. 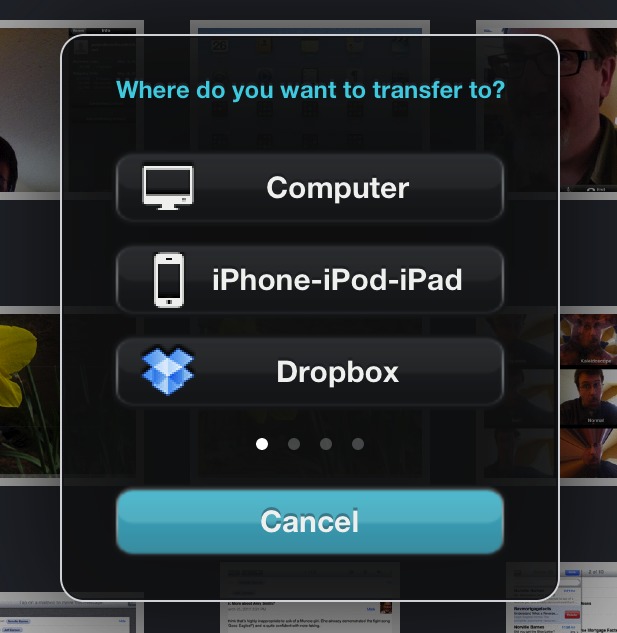 PhotoSync automatically creates its own folder hierarchy, which includes the name of the device and the album from which the images come. It would be nice if PhotoSync would dump anything I transfer into a single folder, but since I often need to massage image files anyway (cropping or converting to a different format for print, for example), having the images appear in a Finder window is good enough.

I also discovered a shortcut that streamlines that process even more, and that quickly became my favorite feature. In PhotoSync’s settings, I set a Quick Transfer destination (the same folder on my Mac, in this case) so all I have to do is touch and hold the red Sync button to transfer any new images — no other taps or dialogs required.

That’s my setup in my little office ecosystem. But what if my Mac isn’t nearby?

PhotoSync can also tie into a Dropbox account, so any photo you transfer appears on all machines on which you’ve set up Dropbox. You also end up with a backup on the Dropbox servers. If you’re traveling and have good Internet access, syncing photos to Dropbox is a great way to make backups of your photos in case your device is lost or broken.

I’ve also found myself occasionally using PhotoSync’s Wi-Fi-based iPhone-iPod-iPad option to transfer photos I capture with my iPhone 4S directly to my iPad, where I prefer to review and edit them. (This is similar to the Beam feature in Apple’s new iPhoto app.)

Mac to iPad — So far I’ve described my particular setup, which is great if you’re a technology writer who generates a lot of screenshots. But another great feature in PhotoSync pushes pixels in the other direction, sending images from the Mac to the iPad.

Although I used this feature a few times to move a few demo photos from my Mac to my iPad, consider this situation, which a friend recently asked about on Twitter: His visiting mother wanted photos of the grandkids on her iPad so she could view them and take them home. The problem was that her iPad syncs to her computer, which was in another city.

The way iOS syncing works, a device can be paired with just one computer. So, my friend couldn’t simply plug her iPad into his Mac and specify that some of his images be added to her photo library; iTunes would want to replace her data with his.

PhotoSync bypasses all that. Instead, PhotoSync can act as a small Web server that accepts files and adds them to the iPad’s Camera Roll. Here’s how it works:

Of course, this approach isn’t the only one my friend could have taken. He could have sent the photos to his mother via email, but photos are large and could run into message size limits. And even then, extracting numerous photos from email messages is awkward. Or, he could have stored the photos in a Dropbox folder and shared that folder with his mother, who could then have viewed the photos in the Dropbox app on the iPad and saved them individually to the Camera Roll. However, with PhotoSync he can install the app on his mother’s iPad and transfer the files directly. When she returns home, she can easily import the photos into iPhoto, because the pictures of the grandkids are in the iPad’s Camera Roll.

I’m always in favor of tools that save time and avoid drudgery, but I was surprised at just how helpful PhotoSync has been with my projects. If you need to transfer images in any capacity between a computer and an iPad, iPhone, or iPod touch (or all of the above), PhotoSync is far more valuable than the $1.99 it costs.

Comments About PhotoSync Bridges the Mac/iOS Divide for Images