For every friend that you invite to join Dropbox, the cloud-based storage and file sharing service has long awarded both you and your friend 250 MB of free storage space. It’s a great technique for encouraging people to sign up with the service, and Dropbox just sweetened the deal by doubling the bonus space award to 500 MB. (Educational Dropbox accounts were already receiving 500 MB referral bonuses, and it appears they remain at that level.)

Even better, and this is a truly classy move, Dropbox has applied the doubling retroactively to all your previous referrals. As a result, my account, already at 13.25 GB (2 GB base amount, plus 250 MB from being referred to Dropbox by someone else initially, plus 8 GB of 250 MB referrals, plus 3 GB from the Camera Upload beta test; see “Get More Storage for Testing Dropbox Camera Uploads,” 29 March 2012) has now jumped to 21.25 GB thanks to the 8 GB of referrals being doubled to 16 GB. Speaking of which, 16 GB is the maximum a free Dropbox Basic account can gain from referrals; paid Dropbox Pro accounts earn 1 GB per referral and can get up to a maximum of 32 GB.

So if you were previously on the edge of filling up your Dropbox account, you may have just received some additional breathing room. To see how much space you have, you can just look in the Dropbox menu, where it will tell you what percentage of your overall space is used. If you check your Account Info page, you can see how your storage breaks down between your files and files shared with you. 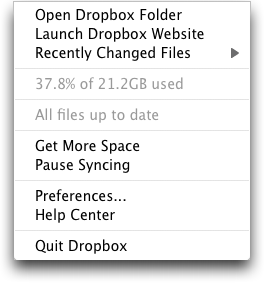